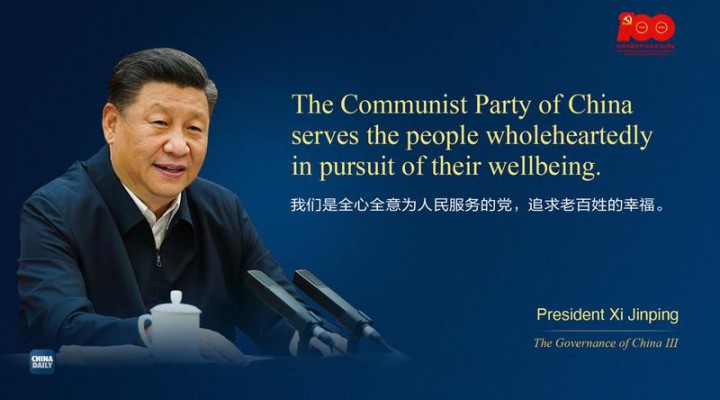 Everything that President Xi has done so far has been with China’s sovereign interests in mind, which in turn elevated its role in the international system and thereafter enabled it to advance its vision of creating a community of common destiny for mankind through BRI in order to restore peace, justice, and equality to International Relations.

CNN published a manipulative information warfare product on Monday titled “Xi Jinping set out to save the Communist Party. But critics say he made himself its biggest threat”. Digital news producer for CNN Digital Worldwide in Hong Kong Ben Westcott and CNN staff dishonestly pushed the narrative that Chinese President Xi Jinping unintentionally weakened the Communist Party of China (CPC) by setting up a de facto dictatorship of fearful loyalists. According to them, he exploited an anti-corruption campaign early on to eliminate internal rivals and centralize control. They also accuse him of irresponsibly failing to groom a successor.

The outlet claims that these and other moves inadvertently weakened the CPC instead of strengthening it like President Xi intended. The introductory part of this hit piece where they cite the Chinese leader’s warnings about how the Soviet Union’s collapse was due to the party’s failure years beforehand sets the tone for the entire article. It basically implies that President Xi is the CPC’s worst nightmare and might ultimately be responsible for its collapse, which could in turn lead to the dissolution of the People’s Republic. Sprinkled throughout the article are speculative claims that some party members are fearful, which adds suspense.

CNN’s narrative is flat-out false, however, which shouldn’t be a surprise to objective readers who follow its biased coverage of China. President Xi isn’t the “biggest threat” to the CPC, but its pride. He oversaw its successful anti-corruption campaign which restored integrity to the party and reinforced the people’s trust in it. The CPC is stronger than ever before because of his visionary leadership. The Chinese leader prophetically foresaw the emergence of cutting-edge threats, particularly those of a hybrid nature in the economic and informational realms, which inspired him to preemptively implement the polices that prevented so many crises.

These are the anti-corruption campaign, the revival of central leading groups within the CPC to focus on specific tasks of national importance, China’s historically unprecedented technological leap of the last decade, the country’s defense of its territorial integrity in all respects (with a particular emphasis on Hong Kong, the South China Sea, Taiwan, and Xinjiang), the Belt & Road Initiative (BRI), enhanced domestic security measures including in the socio-cultural realm, and China’s promulgation of the dual circulation development paradigm. These policies resulted in China’s rise as a world power, but also provoked the West’s jealousy.

Instead of accepting that China is leading the global transition to multipolarity and helping its fellow counterparts in the Global South finally obtain an equitable stake in the emerging world order, the West immediately sought to sabotage the country’s rise in order to indefinitely prolong its fading hegemony. This first began during the Obama Administration’s so-called “Pivot to Asia” (P2A) but accelerated during the Trump Administration’s unprovoked trade war. The incumbent Biden Administration has been hellbent on institutionalizing America’s hybrid war against China into a so-called “new cold war”.

The US can’t of course accept responsibility for destabilizing the world so it’s unconvincingly trying to pin the blame on China through information warfare. All of its weaponized narratives in one way or another nowadays have the common theme of claiming that China is a so-called “autocracy” or “dictatorship”, which explains CNN’s personal attacks against President Xi. Just like former Soviet leader Josef Stalin was wrongly blamed for provoking the “old cold war”, so too is Chinese President Xi being blamed for provoking the “new” one. In reality, just like back then, the country that’s being framed as America’s chief adversary is only defending itself.

Everything that President Xi has done so far has been with China’s sovereign interests in mind, which in turn elevated its role in the international system and thereafter enabled it to advance its vision of creating a community of common destiny for mankind through BRI in order to restore peace, justice, and equality to International Relations. Only the West’s selfish elite and the powerful military-industrial-tech complex have to lose from this mutually beneficial outcome for global affairs, which is why they’re siccing their infowar bulldogs like CNN on China in a last-ditch attempt to desperately mislead the masses about what’s happening.

Claiming that President Xi is the “biggest threat” to the CPC is delusional, the same as implying that he or his country are a “threat” to the US. The Chinese leader is actually the CPC’s pride, as well as that of the Chinese people and the global masses who yearn to finally experience the genuinely rules-based world order that they were promised by the UN Charter, not the faux “rules-based” one that the West rhetorically hides behind to impose double standards upon the rest of the world. With President Xi at its core, the CPC contributes to stabilizing the world, while President Biden’s core role in the US has been to destabilize that same world.