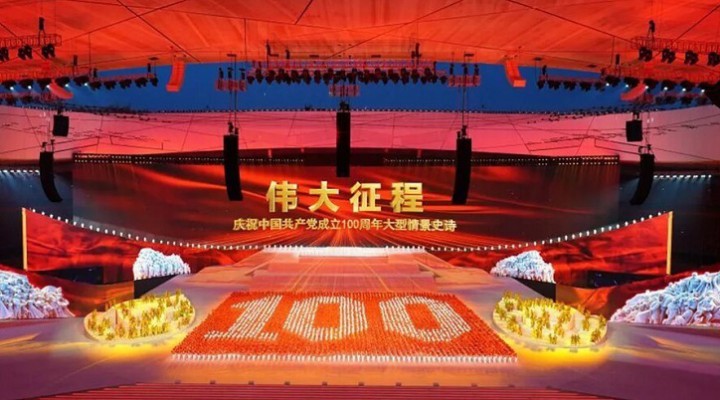 As China celebrated 100 years of the ruling Communist Party of China (CPC) it was also celebrating the nation’s rise from a humiliated colony subjugated by Western imperialism to a global power.

In just the last 21 years of the 21st century, China has transformed from a developing nation, to rivaling the United States, to now being poised to surpass the US and the West in general.

China’s rise has also meant the rise of Asia and beyond as it builds an alternative to the so-called “rules-based international order” created by and exclusively for the US and its Western allies.

Chinese President Xii Jinping’s speech commemorating the 100 year anniversary of the CPC was devoid of self-proclaimed “global leadership” and instead focused on strengthening China internally while constructively contributing to the world abroad, mentioning its massive infrastructure building spree – the One Belt, One Road – by name.

Indeed, China today is not the China of Mao Zedong, nor the China of 100 years ago, though the Western media has worked hard to convince global audiences otherwise – attempting to reinforce not only the most negative prejudices held toward China, but also the most inaccurate ones.

China’s Rise, A Difficult Pill for Western Hegemons to Swallow

President Xi Jinping’s speech and related activities to the 100 year anniversary of the CPC covered a wide range of topics. Celebrations and performances noted China’s progress in everything from manufacturing, energy production, and infrastructure, to space exploration, poverty reduction, and the development of China’s armed forces.

Indeed, China has accomplished for its 1.4 billion citizens as well as for its friends and allies abroad feats in the realm of development, peace, and stability unrivaled by the West.

Yet Western media coverage appeared fixated on a single sentence taken from an over 5,000 word speech.

The BBC in its article, “CCP 100: Xi warns China will not be ‘oppressed’ in anniversary speech,” would begin by stating:

China’s President Xi Jinping has warned that foreign powers will “get their heads bashed” if they attempt to bully or influence the country.

The quote was meant to provoke Western audiences, many of whom are guided by their respective media outlets of choice to adopt a sense of superiority and to feel threatened by China’s successes. It was also meant to couple with a massive disinformation campaign depicting China as a threat to global peace and stability, leading audiences to see the quote as threatening to “bash” the heads of anyone who now tries to hold China accountable.

Deliberately omitted by the BBC was any context related to President Xi Jinping’s or China’s well-founded concerns regarding foreign powers who at one point in China’s recent history, colonized sections of its territory with Hong Kong being handed back over to China by the British only as recently as 1997 and with Taiwan still maintained as a Western foothold in Chinese territory to this day.

In fact, the only mention of Hong Kong and Taiwan by the BBC related to claims of Beijing’s “crackdown” on Hong Kong and tensions surrounding Taiwan’s reunification with mainland China – two points of contention created deliberately by the West as a means to pressure Beijing and to contain the rise of China.

China’s humiliation by the West lasted nearly a century and in many ways still continues – albeit in an ever diminishing capacity.

The arrest of Huawei Chief Financial Officer Meng Wanzhou in 2018 by Canadian police at the direction of the US government over alleged violations of illegal US sanctions against Iran serves as a pertinent example of this continued campaign by the West to exercise “domination” over China and to humiliate it and its people at every juncture.

The BBC in its article also claimed that China “has repeatedly accused the US of trying to curb its growth,” as if to suggest Beijing is imagining this rather than it being a central theme of US foreign policy toward China and Asia in general.

US documents such as the declassified “UЫ Strategic Framework for the Indo-Pacific,” released as part of the Trump White House archives, explicitly state that US objectives in Asia include maintaining “US strategic primacy in the Indo-Pacific region,” and to “promote a liberal economic order while preventing China from establishing new, illiberal spheres of influence.”

In reality, US President Donald Trump’s desire to maintain primacy over Asia (including China) was carried over from the Obama Administration – who in turn was pursuing an agenda that has been ongoing for decades – articulated as early as the 1960’s in the “Pentagon Papers.”

And it is a policy that continues today. Current US President Joe Biden in his “remarks on America’s place in the world,” would claim that “American leadership” must meet “advancing authoritarianism, including the growing ambitions of China to rival the United States.”

How else would either Trump’s or Biden’s stated objectives be met besides “curbing China’s growth?”

And that is exactly what US sanctions, kidnapping industry leaders, destabilizing Chinese allies, and its growing propaganda war against China itself all aim to achieve – curbing China’s growth. The US along with its G7 allies now find themselves not only being surpassed by China, but engaged in a campaign of geopolitical bullying with a nation increasingly able to fight back.

China understands that “the West” is not merely Wall Street, Washington, London, and Brussels. It is a region including hundreds of millions of people who otherwise could be potential partners in building a new multipolar world order where national sovereignty – not a self-appointed international arbiter composed of elite special interests – holds primacy.

Toward that end, China has exercised patience. China’s rise beyond the reach of these fading special interests is inevitable.

China has a population 4-5 times larger than the US. It’s population is hardworking and well-educated. China produces millions more graduates in the fields of science, technology, engineering, and mathematics than the US does – every year. These are graduates that will directly contribute to research and development, technological innovation, improved manufacturing and the overall expansion of China’s already massive industrial capacity, as well as the construction of essential infrastructure both at home and abroad as part of the OBOR initiative.

China is already counted by the nations of Asia as a leading trade partner and investor. Even nations like Australia and New Zealand find themselves pivoting eastward, placing economic development ahead of traditional political alliances. Australia’s leadership is attempting to ignore the changing tides of geopolitics and has thus self-inflicted economic hardship on its population. New Zealand has performed a much more graceful balancing act to its own benefit while setting a precedent for others to follow, including for Western nations.

China’s naval forces are already larger than the United States’ – with the rest of its armed forces more than capable of defending against any Western aggression against it in its own territory.

And while the Western media continues to cite the threat of China using military force to “take” Taiwan, Taiwan has – like nations in the region – found itself tied economically to the mainland’s rise. Taiwan is additionally a territory of China and the people of Taiwan share a common fate with the mainland. It is China’s rise that propels Taiwan’s economy, not trade with the West. This is a trend that will only continue well into the foreseeable future.

Looking at these fundamentals, what can the US and its partners do to “maintain primacy” over the “Indo-Pacific region” and by implication over China? While the US attempts to use sanctions, political subversion – both within and along China’s borders – and even military aggression by proxy or directly – US leadership appears not to have considered whether or not the premise of maintaining primacy over a nation with a larger population and soon to have a larger economy was ever sound to begin with.

The celebration of the CPC’s 100 year anniversary and all that China’s government and people have achieved in the past century is a story that does not sit well for a West determined to deride these accomplishments and to add fuel to a propaganda war being used to undo these accomplishments.

The story of China’s rise will not only be about how it went an impoverished, humiliated colony of Western powers to a global superpower, and perhaps even the premier global superpower – but also a story about how it has and will continue to navigate the dangerous, irrational policies of the West in its increasingly desperate bid to contain this rise. It will also be a story about whether China has learned from the West’s mistaken pursuit of unsustainable hegemony once its rise is complete.

G7 and China Face Off on Infrastructure

US vs China: Can Washington Compete with One Belt, One Road?

0 thoughts on “China’s Rise: From Humiliated Colony to Global Power”