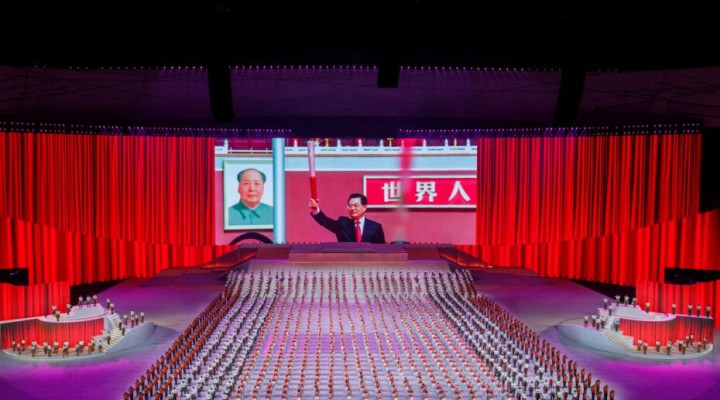 Western exceptionalists may continue to throw a fit 24/7 ad infinitum: that will not change the course of history.

The Chinese Communist Party (CCP) centennial takes place this week at the heart of an incandescent geopolitical equation.

China, the emerging superpower, is back to the global prominence it enjoyed throughout centuries of recorded history, while the declining Hegemon is paralyzed by the “existential challenge” posed to its fleeting, unilateral dominance.

A mindset of full spectrum confrontation already sketched in the 2017 U.S. National Security Review is sliding fast into fear, loathing and relentless Sinophobia.

Add to it the Russia-China comprehensive strategic partnership graphically exposing the ultimate Mackinderian nightmare of Anglo-American elites jaded by “ruling the world” – for only two centuries at best.

The Little Helmsman Deng Xiaoping may have coined the ultimate formula for what many in the West defined as the Chinese miracle:

“To seek truth from facts, not from dogmas, whether from East or West”.

So this was never about divine intervention, but planning, hard work, and learning by trial and error.

The recent session of the National People’s Congress provides a stark example. Not only it approved a new Five-Year Plan, but in fact a full road map for China’s development up to 2035: three plans in one.

What the whole world saw, in practice, was the manifest efficiency of the Chinese governance system, capable of designing and implementing extremely complex geoeconomic strategies after plenty of local and regional debate on a vast range of policy initiatives.

Compare it to the endless bickering and gridlock in Western liberal democracies, which are incapable of planning for the next quarter, not to mention fifteen years.

The best and the brightest in China actually do their Deng; they couldn’t care less about the politicizing of governance systems. What matters is what they define as a very effective system to make SMART (specific, measurable, achievable, relevant and time-bound) development plans, and put them in practice.

At the start of 2021, before the onset of the Year of the Metal Ox, President Xi Jinping emphasized that  “favorable social conditions” should be in place for the CCP centennial celebrations.

Oblivious to waves of demonization coming from the West, for Chinese public opinion what matters is whether the CCP delivered. And deliver it did (over 85% popular approval). China controlled Covid-19 in record time; economic growth is back; poverty alleviation was achieved; and the civilization-state became a “moderately prosperous society” – right on schedule for the CCP centennial.

Since 1949, the size of the Chinese economy soared by a whopping 189 times. Over the past two decades, China’s GDP grew 11-fold. Since 2010, it more than doubled, from $6 trillion to $15 trillion, and now accounts for 17% of global economic output.

This is the background for the next development stage – where the CCP will in fact double down on its unique hybrid model of “socialism with Chinese characteristics”.

The key point is that the Chinese leadership, via non-stop policy adjustments (trial and error, always) has evolved a model of “peaceful rise” – their own terminology – that essentially respects China’s immense historical and cultural experiences.

This is reflected in major policy adjustments such as the new “dual circulation” drive, which places greater emphasis on the domestic market compared to China as the “factory of the world”.

Past and future are totally intertwined in China; what was done in previous dynasties echoes in the future. The best contemporary example is the New Silk Roads, or Belt and Road Initiative (BRI) – the overarching Chinese foreign policy concept for the foreseeable future.

As detailed by Renmin University Professor Wang Yiwei, BRI is about to reshape geopolitics, “bringing Eurasia back to its historical place at the center of human civilization.” Wang has shown how “the two great civilizations of the East and the West were linked until the rise of the Ottoman Empire cut off the Ancient Silk Road”.

Europe moving seaward led to “globalization through colonization”; the decline of the Silk Road; the world’s center shifting to the West; the rise of the U.S.; and the decline of Europe. Now, Wang argues, “Europe is faced with a historic opportunity to return to the world center through the revival of Eurasia.”

And that’s exactly what the Hegemon will go no holds barred to prevent.

It’s fair to argue that Xi’s historical counterpart is the Hongwu emperor Zhu, the founder of the Ming dynasty (1368-1644). The emperor was keen to present his dynasty as a Chinese renewal after Mongol domination via the Yuan dynasty.

Xi frames it as “Chinese rejuvenation”: “China used to be a world economic power. However, it missed its chance in the wake of the Industrial Revolution and the consequent dramatic changes, and was thus left behind and suffered humiliation under foreign invasion …we must not let this tragic history repeat itself.”

The difference is that 21st century China under Xi will not retreat inward as it did under the Ming. The parallel for the near future would rather be with the Tang dynasty (618-907), which privileged trade and interactions with the world at large.

To comment on the torrent of Western misinterpretations of China is a waste of time. For the Chinese, the overwhelming majority of Asia, and for the Global South, much more relevant is to register how the American imperial narrative – “we are the liberators of Asia-Pacific” – has now been totally debunked.

In fact Chairman Mao may end up having the last laugh. As he wrote in 1957, “if the imperialists insist on launching a third world war, it is certain that several hundred million more will turn to socialism, and then there will not be much room left on earth for the imperialists; it is also likely that the whole structure of imperialism will utterly collapse.”

Martin Jacques, one of the very few Westerners who actually studied China in depth, correctly pointed out how “China has enjoyed five separate periods when it has enjoyed a position of pre-eminence – or shared pre-eminence – in the world: part of the Han, the Tang, arguably the Song, the early Ming, and the early Qing.”

So China, historically, does represent continuous renewal and “rejuvenation” (Xi). We’re right in the middle of another one of these phases – now conducted by a CCP dynasty that, incidentally, does not believe in miracles, but in hardcore planning. Western exceptionalists may continue to throw a fit 24/7 ad infinitum: that will not change the course of history.

0 thoughts on “The Chinese Miracle, Revisited”