HOME / WORLD / The ‘Transition’ of the Élites 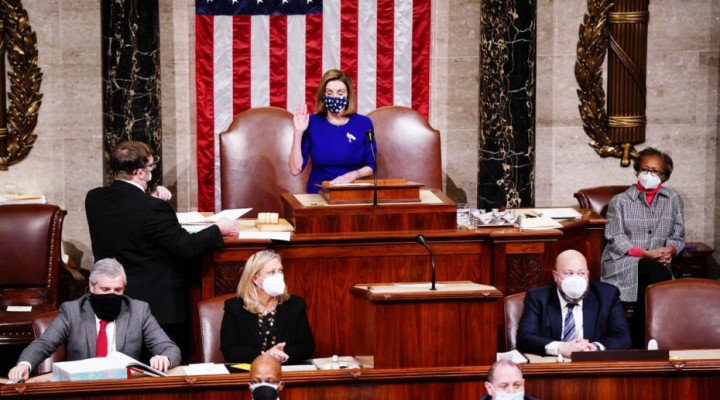 The neo-cons were for ever knifing Trump in the back. They’ve now gone to Biden.

Rep. Jamie Raskin wrapped up the impeachment managers’ case for convicting Donald Trump by citing a 1776 passage by Tom Paine: “Tyranny, like hell, is not easily conquered, but we have this saving consolation: the more difficult the struggle, the more glorious in the end – will be our victory”. Light and dark. Good and evil – and so the essence of the ‘show trial’ stands revealed. It is one of extravagant theatre – touching on the Manichean through using edited clips from TV to present a drama consisting of, on the one hand, legitimacy and power, versus, on the other, Trump and his supporters as – not just ‘enemies’ – but ‘tyrants out of hell’.

The question ultimately is: Did it succeed? Was the ‘guilty party’ cowed by the majestic dramaturgy of the show trial, and fearful of a coming domestic Patriot Act ? Did it guarantee a long era of one-party’s rule?

At one level, it failed. Reports suggest that Sen. McConnell (perhaps reflecting his own emotional reaction to the 6 January), had assured the Democratic leadership of a much bigger contingent of Republican senators prepared to vote to convict. In the end, only seven did.

So, the trial may have been flawed in its execution, but also prove to be flawed in its purpose. Many of the most notorious show trials, U.S. historian Professor Vlahos notes, have headed in a far more fatal direction, ending up achieving the very opposite of what they intended: The twin show trials (from the first U.S. civil war) that were the Dred Scott decision (not a classic show trial, yet with all the hallmarks of a sacred national trial) and John Brown’s trial and execution, failed spectacularly in the late 1850s. Rather than buttressing the southern States’ place in the American polity, these two ceremonial events pushed Northern states (now emotionally opposed to slavery) into arguably existential opposition to the South and everything it represented, including, above all, its grip on political power. We know what happened next, Professor Vlahos wryly notes.

The point here is that the southern States’ grip on power in 1856 was considerably weaker than it appeared. It is too early to judge for today’s struggle, but there are indications (not least from the language of ‘darkness and light’ employed by Biden and other leaders) that the Democratic Party may be engaged in a self-defeating strategy, seeking to achieve things (such as the crushing of dissent), which cannot be achieved. And having launched down this continuum, they will find it hard to retreat back from it.

Congressional elections come in 2022. Will the Republicans be energised and motivated – as were the Northern states after those 1850s show trials – vigorously to contest them? Maybe. Both parties at this point are weakened. But events have flipped the U.S. balance of power before: In 1968, it was race riots; soaring crime rates; a social and cultural revolution on the campuses, and a war in Southeast Asia. In 1980, it was 21% interest rates, 13% inflation, and 52 U.S. hostages held in Iran.

Yes, the Republican Party may be entering a period of contention or civil war, but if the ‘show trial’ showed anything, it demonstrated again the hold that Trump has over the party base. The trial might well have consolidated that hold if anything – even if some old-style conservatives depart a metamorphosised GOP, in search of a more peaceful and civil anchorage. McConnell’s conservative contingent seems, in retrospect, to emerge as the ephemeral element, rather than a key pivot around which a new GOP might form.

Yet Biden, in many ways, is in the politically weaker position. His party is less than homogenous – it is a more conflicted bunch. Many of its components simply detest each other. The Clinton-Obama neoliberal wing is fixated in its belief that they, and the U.S., have been on the global side-lines for far too long – and are agog to jump back in. They are escalating in Afghanistan, in Syria, and preparing a new push in Ukraine. Trump’s troop withdrawals have been all reversed (even for Germany) – and numbers deployed rather, have been augmented.

In spite of their heady eagerness to lead the world, they are likely to find themselves banging heads with a changed world. Iran, Russia – even the EU – are not showing regard to the Biden bugle call: ‘America is back’.

In party terms, though, the urban Millennial base (and even more so, the angry X-Gen), view the Clinton-Obama neo-cons derisively as ‘just Boomers’ – establishment tools of the despised Oligarchs and billionaires, who have so screwed their lives. These generations are not ‘up’ for more war. They want a Life back. They despise Wall Street which they see as bankrolling and colluding with the Boomer political class. Recently, the trading mania surrounding Robinhood and Gamestop reflected just how strong is the animus – a visceral Millennial anger channelled against the Wall Street ‘suits’, and against Boomers as a class.

Then, (aside from the Millennials), how will the ‘war party’s’ hawkishness jibe with the Climate-change, lockdown-prioritising, urban, woke wing of the party? And how will the Clinton-Pelosi-Obama iron lock on the Party apparatus and institutions mesh with the woke radicals seeking cultural ‘revolution’? And will what remains of Blue working class continue to support a party which puts climate objectives above jobs? A major Biden donor, the powerful AFL-CIO’ union President Trumka, was deeply angry at Biden’s executive order immediately ending the Keystone XL pipeline – and the loss of 11,000 jobs. How will the Dems war on fossil fuels, sit with today’s Texas’ renewables freeze up?

In what way will Biden try to ‘square this non-contiguous circle’? Notwithstanding that there are major domestic challenges ahead, too: Yellen is saying that now is time to ‘Go Big’ with helicopter money (though government deficit already amounts to 18% of GDP); lockdowns are ever more polarising; and markets ever more ‘make-believe’.

Likely there will be more ‘theatre’: The Campaign, the Primary, the Inauguration and Impeachment were all mounted as reality-TV drama. With the help of the Silicon Oligarch’s platforms, the public can be endlessly distracted by de-platforming drama, ‘cancellation’ and woke melt-downs at ‘Orange Man Bad’. AOC’s twitter tantrums no longer touch on substance: It is all theatre. This is where it’s going.

However that essentially is but one squaring of a small circle (the ‘public square’) – compared to the wider ‘squaring’ underway, known as the Great Reset: The globalist élites see a car crash fast approaching. Financialism as an era, is drawing to a close. Public finances are ‘for the birds’. Hyper-financialism brings no prosperity (except to the 1%), and it incubates rising ‘populist’ anger.

The point here, is that this concatenation of change elides with Tech innovation and digitalised finance, to threaten the intermediation role of the finance and banking system.

The ruling élites therefore are trying to square this circle by transiting from their historic role (since 1700s) as a financial and banking plutocracy, to become a technocratic oligarchy of ‘expertise’. In this mode, they can both contain and absorb disruptive Tech innovation, and oversee the concentration and re-grouping of business cartels under the new rubric of Big Tech.

Re-defining this new ‘reality’ as Carl Schwab’s Fourth Industrial Revolution is just a device to allow ‘things to change – so that everything remains the same’. It is not a fourth revolution, but a continuation of earlier phases of industrialisation. This ‘transition’ of the élites – as Big Tech and the MSM are deployed to smother political dissent – is aimed precisely to avoid any effective rotation at all – the oligarchs of the banking world simply would meld into the Tech billionaires whose ‘expertise is required to guide the world – through its health, climate, security and economic challenges’.

There would be no true rotation. The élites – and their vast wealth – would be saved. This is the job entrusted to Biden et al to bring to a conclusion. It is why Wall Street is financing him so handsomely.

Obviously, this transition is a delicate manoeuvre. Unforeseen events can easily disrupt it. Trump simply was too disruptive (in spite of all that he did for Wall Street – which was a lot).

Which brings us back to the GOP: What should we expect, by contrast to the Biden approach? Trump is angry. Angry at ‘the system’ which he believes threw him under a bus – and which will now try to punish him with an entanglement of legal suits. He will be more radical. McConnell just had a first taste. He will likely be disruptive. His disruptiveness and unerring focus on bringing real jobs, however, will endear him to most of the existing GOP base – and to constituencies beyond, perhaps, too. There is a lot of anger out there.

In terms of foreign policy, a new book by Stephen Wertheim, Tomorrow the World: The birth of U.S. Global Supremacy potentially gives the GOP the intellectual framework for a return to an earlier more Burkean Republicanism, which has correspondences with Trump’s instincts against interventionist adventures. (Pat Buchanan has long been its advocate.)

Wertheim’s main thesis is that it was the fall of France in 1940 – and not Pearl Harbour – that was the catalysing event that led to “U.S. global supremacy being born.” It is a gripping intellectual history, revealing how American foreign policy was manufactured by the economic and political planners congregated by the influential Council on Foreign Relations (CFR), “the conceptual core of the imperial matrix” (which it still is).

The planners argued (in the early 1940s) that, were Nazi Germany to come to dominate Europe, the U.S. would have to dominate everywhere else. That was the logical conclusion based on the planners’ initial hypotheses. Thus U.S. foreign policy for the next 80 years was born: the U.S. had to wield “unquestionable power”, as stated in the CFR planners “recommendation” to the State Dept. “The United States was born of exceptionalist nationalism, imagining itself providentially chosen to occupy the vanguard of world history”, Wertheim observes.

But it still had to be sold to the American people, and that led to two new developments. First, partisans of hegemony demonized opposition thinkers as “isolationists”, a new term of opprobrium designed to put naysayers on their heels. “By developing the pejorative concept of isolationism,” writes Werthheim, “and applying it to all advocates of limits on military intervention, American officials and intellectuals found a way to make global supremacy sound unimpeachable”.

And there it is: Team Biden’s foreign policy gurus remain clinging to the same ideas that emerged from the minds of those strategic CFR planners back in the 1940s, ignoring the changed world (and ignoring too, that the U.S. is not the same as the state which emerged onto the world stage at the end of WW2). As Professor Vlahos notes, it is a vanity to seek to achieve things which cannot be achieved. It is self-defeating, too.

This detailed intellectual story of the CFR however, may well find its resonance within an evolving GOP, seeking a fresh look for American foreign policy. It would fit well with Trumpism: The neo-cons were for ever knifing him in the back. They’ve now gone to Biden.

0 thoughts on “The ‘Transition’ of the Élites”