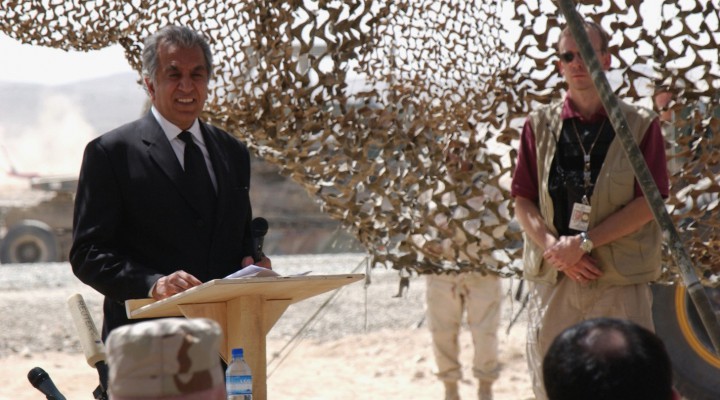 According to a CNN report yesterday, Biden is going to keep Zalmay Khalilzad, President Trump’s envoy for peace talks with the Taliban, “according to three sources familiar with the matter.” And he’s even willing to buck tradition to keep Khalilzad on the job.

Per CNN: “This move is not typical. Traditionally an incoming administration replaces politically appointed officials with their own team, particularly on foreign policy matters with such significance.”

The US and the Taliban agreed to have US and NATO forces finally leave Afghanistan by May, but CNN reports “that is at odds with a desire by Biden and his foreign policy team to keep residual forces in Afghanistan.”

And if there is anyone who knows about treating Afghanistan as a client state with no sovereign rights, it’s Zalmay Khalilzad. His State Department biography lists him as a former board member of the National Endowment for Democracy, the RAND Corporation and the Atlantic Council, but his history is even more sordid than those swamp creature bonafides would indicate.

In September 2019, I exposed Khalilzad in an investigation for MintPress News. The following lifts heavily from that report.

Khalilzad was a charter member of the Project for a New American Century. As I wrote, he “has been quietly overseeing the destruction of Afghanistan for most of his political career — longer than the Taliban has existed as an organization.”

That’s because of his work with Zbigniew Brzezinksi, the mastermind of Operation Cyclone, according to Khalilzad’s bio at the University of Chicago’s International House. The CIA’s Operation Cyclone dumped thousands of tons of weapons worth billions of dollars into the hands of the Afghan Mujahideen in an effort to use them as proxy forces against the Soviet Union and the Afghan government that was friendly to it. The CIA wrote extremist books to be used for schoolchildren that are still giving US forces headaches, and trained an untold number of “freedom fighters.”

The story has been told thousands of times of how those Mujahideen freedom fighters became “the terrorists” and Enemy No. 1 of the United States in short order. All in an effort to give the Soviets a Vietnam-style quagmire of their own.

According to the Institute for Policy Studies, Khalilzad had “remained in touch” with the Taliban since they took power in Kabul in 1996. It’s reported that the Taliban had offered Khalilzad to be their ambassador to the United Nations but recognition of the former Mujahideen fighters as a legitimate government never really formalized.

As I reported in my MintPress article, following the fall of the government, the US under Bill Clinton sought to use the Taliban to help the company Unical build and maintain an oil pipeline in the region to rival Iran and Russia’s energy dominance. “Members of both the Taliban and al-Qaeda were flown into the U.S. by the government and [Unical] in 1997, where they were joined by Khalilzad for a reception. He was spotted ‘chatting pleasantly’ with ‘leaders of Afghanistan’s Taliban regime about their shared enthusiasm for a proposed multibillion-dollar pipeline deal,’ according to a story in the Washington Post a few months after 9/11.”

Journalist Michael Rubin has reported that Khalilzad “arranged for a senior Taliban official to come to the United States to meet with Clinton administration officials and business leaders.”

As I continued: “By this time, Khalilzad had worked with Brzezinski under President Jimmy Carter, served as a senior State Department advisor on the Soviet-Afghan war under President Ronald Reagan and worked for the Pentagon under George Bush senior.”

In the Bush Jr. years, Khalilzad first worked “preparations for a post-Saddam Hussein Iraq” according to the White House until 9/11 when he was transferred to being a functionary of US regime change policy in Afghanistan. After the Taliban was overthrown, Khalilzad would help write the new constitution for Afghanistan and became US Ambassador to Afghanistan.”

During the Obama Administration, Khalilzad tried to have himself installed as the unelected ruler of Afghanistan after he failed to meet the filing deadline required to run for president in the country. “The position would allow Mr. Khalilzad to serve as ‘a prime minister, except not prime minister because he wouldn’t be responsible to a parliamentary system,’ a senior Obama administration official said,” the New York Times reported. “Taking the unelected position would also allow Mr. Khalilzad to keep his American citizenship.”

The retainment of Zalmay Khalilzad appears to be the second major holdover from the Trump Administration, the first being Dr. Anthony Fauci, whose hidden history I recently profiled. With resounding sighs of relief from the ruling class over Trump being out of power and gagged on social media, unscrupulous actors like Khalilzad have been left unscathed and have been allowed to fly under the radar right into the next chapter of American global dominance under Biden.

Did you enjoy reading this article? I value the free exchange of information, so I don’t put anything behind a paywall. Consider kicking me a few bucks on PayPal to support my independent reporting.

A note to media outlets: You are free to re-publish my writing in-full with the following text at the bottom:

Alexander Rubinstein is an independent reporter on Substack. You can subscribe to get new articles from him delivered to your inbox here, and support his journalism here.