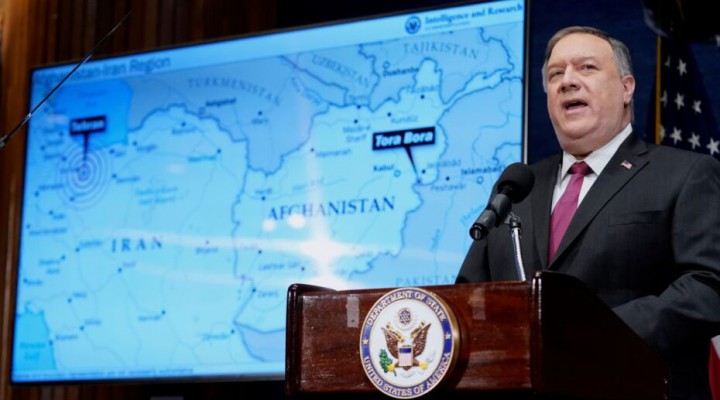 The neocons and the media demand tough talk and even tougher action from their candidate and Pompeo is already running hard to oblige them.

It is finally over. Joe Biden has been inaugurated President of the United States while his predecessor Donald Trump has retired to Florida. Trump intends to remain the driving force in the Republican Party but there are many in the GOP who would like to see him gone completely and the national media is obliging by depriving him of a “voice,” cutting him off from his preferred social media. The Democratic Party’s top “megadonor” Israeli film producer Haim Saban goes one step farther, recommending that all the media stop reporting on Trump and his activities, thereby taking away his platform and making him disappear politically speaking.

Prior to the inauguration, which proceeded protected by an unprecedented display of military and police, there had been so much going on in and around Washington that other serious developments worldwide were not getting the attention that they merited. President Donald Trump was impeached for “high crimes and misdemeanors” relating to his alleged encouragement of the January 6th rioting at the U.S. Capitol building, but to my mind the recent travels and meetings involving Secretary of State Mike Pompeo could turn out to be far more damaging to America’s long-term interests. One wonders why Pompeo was engaging in frenetic activity with the Administration that he represented being about to vanish in a few days, but the answer is perhaps obvious. Trump and Pompeo want to lay a foreign policy mine field for the Joe Biden White House, locking the new administration into policies that will prove difficult to untangle.

Pompeo has been most active in four areas: Iran, China, Cuba and Yemen. Iran, as has often been the case with the Trump Israeli-driven policy in the Middle East, has been the principal focus. The Trump Administration has consistently responded to Israeli and also Saudi perceptions of the threat from Iran to the entire region, even though those claims were generally based on self-interests and deliberately falsified intelligence. Washington has withdrawn from the nuclear agreement with Iran signed in 2015 and has been waging incrementally expanded economic warfare against the Iranians for the past three years. It has collaborated with the Israelis on assassinations and air attacks on primarily civilian targets in Syria and Lebanon.

During Trump’s last two weeks in power there was much talk about the possibility of a U.S. attack on Iran. The Israeli military was on alert and there was a surge in attacks on Syria, frequently using Lebanese airspace. One incident in particular on January 6th used U.S. intelligence to enable multiple bombing attacks on targets inside Syria, killing 57. Pompeo reportedly dined publicly in a well-known Washington restaurant Café Milano on the day after the carnage to discuss the “success” with Israel’s head of Mossad Yossi Cohen.

The public meeting with Cohen was a sign from the Trump Administration that the U.S. supports Israel’s bombing campaign against claimed Iranian targets in Syria. If Biden wishes to change that, he will have to do so publicly, earning the ire of Israel’s friends in the Democratic Party and media. And more was to come. Last Tuesday, Pompeo gave a speech in which he accused al-Qaeda and the Iranian government of being “partners in terror” , constituting an “axis” of terrorism. He further claimed that al-Qaeda has a “new home base” and a “new operational headquarters” built for it in Tehran, an assertion that ran counter to the intelligence collected by U.S. counterterrorism officials, who said there was no evidence to support such a claim. In fact, the Intelligence Community has long asserted that al-Qaeda is fundamentally hostile to Shi’ite Iran and that the Iranians return the favor. In other words, Pompeo is either lying or making something up that will be an impediment if Biden tries to improve relations with Tehran. Pompeo also went so far as to declare that Iran is the “new Afghanistan” for al-Qaeda, which is meant to imply that Iran is now its home base and safe haven. There is also no evidence to support that claim.

The Trump Administration has also included Cuba on the list of state sponsors of terrorism, based on nothing whatsoever, apparently as something of a throw away item to shore up support from the rabid Cuban exile community in Florida. So too the decision to designate the Houthis of Yemen as terrorists to give a parting gift to the Saudis and the UAE. Yemen is suffering from famine and the terror designation will have a drastic impact on imports of food and medicine, condemning many Yemenis to death. Daniel Larison opines that the “Houthi designation is by far the worst thing that Pompeo has done as Secretary of State, because if it is not quickly reversed it will lead directly to the deaths of tens and possibly even hundreds of thousands of people. It takes severe cruelty to look at a war-torn, famine-stricken country that depends heavily on outside aid and imports and then choose to suffocate the survivors with additional economic warfare. That is what Pompeo has done, we shouldn’t forget that.”

And, incidentally, the United States gains absolutely nothing from killing thousands of people in Yemen, but that is not all. Pompeo has also opened the door to new problems with China. His easing of the longstanding restrictions on contacts between American diplomats and Taiwanese has been described by the State Department as a strong gesture of support for the democratic government and “ally” in Taipei. It overturns more than forty years of “strategic ambiguity” which has prevailed since Richard Nixon traveled to Beijing and recognized the communist People’s Republic of China as China’s only legitimate government, to include over Taiwan by implication. The so-called “One China” principle states that Taiwan and China are part of the same China with the U.S. recognizing, though not necessarily endorsing, that the PRC has a historic claim to sovereignty over Taiwan.

Apart from locking in policies that Biden will find hard to shift, Pompeo also has a secondary motive. It is widely believed that he would like to run for president in 2024. He will need the support of the Israelis and their powerful domestic lobby as well as the Cubans in Florida and it does not hurt to show him playing hardball in the Middle East and against an increasingly vilified China. The so-called neocons, who have again become influential in the Republican Party and the media, demand tough talk and even tougher action from their candidate and Pompeo is already running hard to oblige them.

Pompeo is right that Al-Qaeda is active in Iran. But he’s not looking for military action… he wants to cause problems for Biden