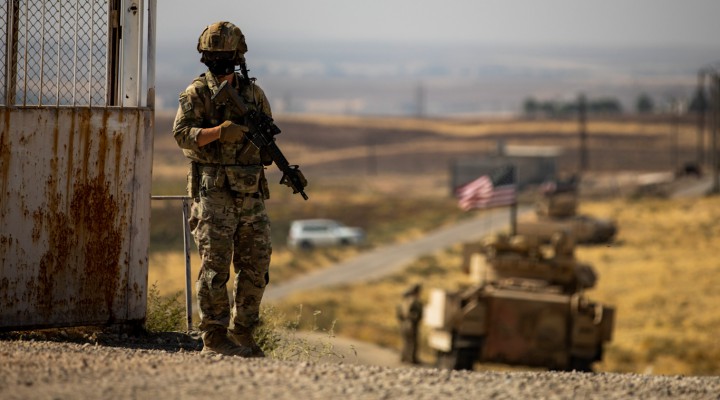 Many of Biden’s first moves in the Middle East, including the building of a new base in Syria, suggest his term will be more of the same rather than a break with the old.

MPN- The U.S.-government funded outlet Voice of America has confirmed rumors that a new military base is being built in northeastern Syria. A convoy of 40 troop carriers and other vehicles arrived and began setting up shop in the city of Hasakah near the Turkish and Iraqi borders over the weekend. “The U.S. flag is now raised over a building,” said journalist Jindar Berekat, a native of the city, “it is not clear how many American soldiers will be stationed at this location, but their armored military vehicles are here and it looks like they are still constructing parts of it.”

“Many here believe that the building of a U.S. base inside Hasakah could be a response to the growing Russian presence in the city,” a local reporter told Voice of America, “this new center [is being built] with the aim of observing Russian forces in Hasakah.” Russian military units have been present in Syria since 2015, intervening on behalf of the government of Bashar al-Assad.

The two foreign superpowers have come close to armed confrontation in Syria many times, including in 2017, when President Trump ordered the bombing of a Russian airbase near the Lebanese border. Already, the American presence has prevented the Russian military from carrying out patrols in northeastern Syria.

While the United States has presented its role in Syria as a counter terrorism operation, Assad’s government has accused it of plundering its resources, “condemn[ing] in the strongest terms the agreement signed between al-Qasd militia (SDF) and an American oil company to steal Syria’s oil under the sponsorship and support of the American administration.” Around 500 American troops have been guarding the country’s oilfields for months, and last summer, Senator Lindsay Graham confirmed that the U.S. had indeed signed a deal with the SDF to “modernize” the country’s oil industry. Damascus considers the agreement “null and void.”

The new base at Hasakah is the latest in a string of actions that suggest the United States wishes to bolster or expand its presence in the war-torn country. Last month, American forces reinforced another base along the M4 highway, which runs from the city of Aleppo through the north of the country and towards the Iraqi border in the east. At the same time, its ally Israel was conducting a series of major airstrikes across the east of the country, reportedly targeting Iranian or pro-Iranian forces.

Increasing hostilities against Iran appears to be a chief concern of the U.S. in the Middle East. 12 months ago, the government announced the construction of three further military bases along the Iran-Iraq border. This was despite a recent unanimous vote (with some abstentions) in the Iraqi parliament demanding the United States military leave the country. This was followed by huge demonstrations in Baghdad demanding the withdrawal of U.S. troops Some estimates put the number of those attending as high as 2.5 million people. President Biden has also ruled out lifting deadly sanctions on the country until it complies with the 2015 nuclear deal — an agreement that the U.S. left unilaterally.

The Biden administration has distanced itself from Trump somewhat on the question of Yemen. The new president received a great deal of praise for his announcement that he was suspending military support to Saudi Arabia. However, as Yemen-born academic Shireen Al-Adeimi noted, he included a number of qualifiers to his statement, including that the U.S. would only stop supporting “offensive operations” and block “relevant” arms sales. “We are going to continue to help Saudi Arabia defend its sovereignty and its territorial integrity and its people,” Biden said in a speech at the State Department. Almost immediately, the State Department began condemning Yemen’s Houthi rebels for supposedly attacking civilian targets inside Saudi Arabia.

Perhaps the Saudis’ defense of their own territory will start to look like Israel’s self-defense against Lebanon and Palestine. On Israel, Biden has countersigned Donald Trump’s decision to move the American embassy to Jerusalem, effectively endorsing the Israeli occupation of Palestine’s largest city. Meanwhile, in Afghanistan, reports suggest he might go back on the decision to remove U.S. troops from the country.

With the arrival of every new president, hope springs eternal that they will conduct a less aggressive strategy in the Middle East. However, many of Biden’s first moves, including the building of a new base in Syria, suggest his term will be more of the same rather than a break with the old.