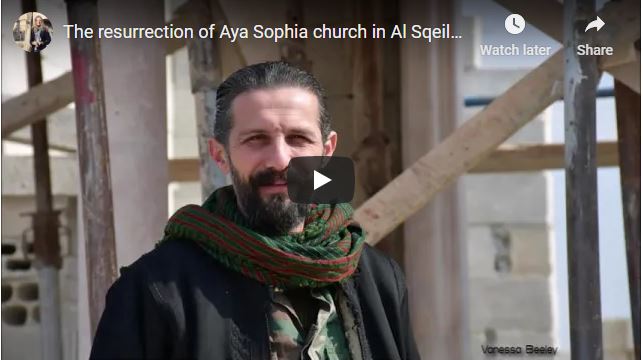 The resurrection of Aya Sophia in Al Sqeilbiyyeh.

3rd February 2021: Yesterday I visited the Syrian Christian town of Al Sqeilbiyyeh, one of the most fertile areas of Syria that was besieged for 7 years by the US Coalition- backed armed gangs. During that time the terrorist groups targeted schools, residential areas, infrastructure with missiles, nowhere was safe. The closest terrorist encampment was only 500m away in Qalaat Al Madiq. Invasion was an ever present danger.

In the photos I took yesterday you will see couples posing for selfies on the embankment from which you could previously see the Nusra Front checkpoints and from where, a huge number of the attacks were launched.

When Erdogan threatened the history and existence of Christianity in the region through his support of terrorists and extremists in Syria and his erosion of Christian heritage in Turkey – the commander of the Sqeilbiyyeh National Defence Forces, Nabel Alabdalla, decided to take action against Erdogan’s neo-ottoman ambitions.

When Erdogan converted the historic Aya Sophia temple into a mosque, Nabel began his project to rebuild a downsized replica of Aya Sophia in Sqeilbiyyeh. Nabel’s vision is that the Sqeilbiyyeh Aya Sophia will be a place of rememberance of all the martyrs who have sacrificed their lives to defend Syria, including the Russian heroes who fought alongside their brothers in the Syrian Arab Army to liberate this holy land from the sectarian invaders and proxy forces of the West.

It is a beautiful thing to see this miracle take shape. It is a miracle because in the midst of all the turmoil in this world, here is someone who is laying the seeds of resistance for the future and leading by example, honouring steadfastness, resilience, justice and hope in a land that has been battered and besieged for ten long years. The building of this symbol of faith in the midst of a world that has fogotten what it is to believe in something better for Humanity, is a gift, not only to Syria but to the world. It is not about religion, it is about peace and honour and dignity.

0 thoughts on “The resurrection of Aya Sophia on Syrian soil – Al Sqeilbiyyeh, Hama.”