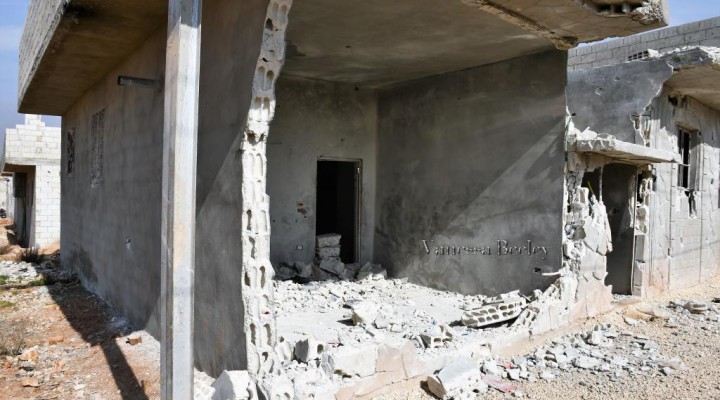 “Our children are terrified, the slightest noise makes them afraid now” a resident of Kazu, a sprawling western suburb of the city of Hama, Syria, told me when I visited the scene of the latest Israeli aggression against the Syrian people.

On the 22nd January at around 4am, Israeli warplanes reportedly flew over Tripoli in Lebanon and launched missiles into central Syria. This attack came two days after the inauguration of Joe Biden as the new US President. The Syrian air defences intercepted the majority of the missiles but the densely populated Kazu suburb took a direct hit with four rockets landing in a narrow residential street.

The first rocket landed in the street outside a small concrete house that was home for a family of nine refugees from Ma’arat Al-Numan in Idlib who had arrived only four months ago “to escape death” only to be murdered by Israel while they slept. The blast brought the walls down on the sleeping family, killing the grandfather, his son, his daughter who had travelled from Tartous and his granddaughter. According to residents a fifth member, a child, who had been terribly injured later died in Hama hospital bringing the death toll to five family members. Four other family members were grievously injured in the blast.

A former Syrian Arab Army soldier and neighbour showed me the damage to their home. The exterior wall was peppered with holes from the shrapnel and had been hastily filled in with cement to protect them against seasonal, freezing temperatures. The soldier himself had been badly injured. He had two stitches in his right eye after shrapnel had torn into his face. He constantly covered his eye,  while he was talking to me, suffering from extreme light sensitivity. He showed me the pigeon coop on their roof that had been destroyed, killing many of the birds inside. Others had flown free and then returned safely.

This area of Hama city suffers sustained electricity outages and lack of essential amenities, thanks to a ten year war and the economic terrorism of the countries waging that war against Syria. The cruelty of this attack which further plunges these people into misery is unimaginable. For Israel, these people are dehumanised, just as they discount the human beings they mow down in Gaza or the occupied territories of Palestine, their lives are of no value to the mass murdering illegal state of Israel.

The former soldier told me that he and his comrades had defended Kazu from 2011 to 2014 when it had been under regular attack from the US Coalition-sponsored armed gangs dominated by Nusra-Front (Al Qaeda in Syria). Since 2014, life has been relatively peaceful, tough but calm. The suburb’s population had increased from 11,000 to approximately 35,000 due to the influx of refugees from areas of Syria under attack from the terrorist groups, according to the people I interviewed.

The Israeli attack was unexpected and it has torn through this community, leaving children shocked and traumatised, afraid to play outside or suffering panic attacks when they hear loud noises.

In December 2020, Israeli PM Benjamin Netanyahu, vowed to deliver a “crushing blow” to “whoever tries to harm us” naming Syria and Iran as their primary targets. Netanyahu rolled out the usual “self-defence” pretext for Israel’s ongoing violation of international law and aggression against a sovereign nation and its allies, namely Iranian military operating inside Syria and fighting the terrorist groups supported by Israel and the US alliance that have been waging the war for ten years against Syria. Israel’s aggression must be seen to be in lock-step with the campaigns of the terrorist groups, including ISIS, to destabilise a country that has been a beacon of resistance in solidarity with the Palestinian cause.

The Syrian foreign ministry wrote to the United Nations director general and to the UN Security Council emphasising Israel’s “flagrant violation of Syria’s sovereignty and international law”. To date, the UN has not condemned the Israeli lawless aggression. The UN’s silence can only be interpreted as tacit endorsement of what is, effectively, US/UK/Israeli-led genocidal policies that target peoples who threaten their supremacist agenda in the region.

In the following video, a neighbour of the victims of the Israeli attack, Hossam Al Hussein, describes what happened in the early hours of Friday morning, 22nd January:

Hossam showed me his house. He told me that his twelve year old son, Mohammed, was blind since birth. Mohammed is very sensitive to noise “he can tell us when the electricity is back on before we realise, because he can hear it” said his father. When the first rocket hit, Hossam told me that his first reaction was to get his son to safety, Mohammed had covered himself with his blanket when the metal and glass showered into his room.

After he had told his family to run out into the street, Hossam saw the grandmother of the family living opposite who was in the street crying for help. Hossam was the first on the scene and was met with a horrific scene and bloodshed. He was the first to see the bodies buried under the rubble. He told me that he later found the mobile phone of the daughter visiting from Tartous. Her husband had heard news of the attack and had been trying to call her, unaware that his wife had been killed alongside their daughter. Hossam told me that one family member had been sleeping when the shrapnel tore into their face, tearing skin from bone. Hossam ran out of words “it was a tragedy, a tragedy”. The memory was too great for him to bear.

Hossam walked me around his simple home. Doors and windows were blown off their hinges. These are the two coldest months in Syria and electricity supply to this suburb is intermittent. The effects of the attack will linger long after the memory fades.

Hossam spoke about his youngest son, Mohammed, who joined us shortly after we arrived. He goes to school at the institute for the blind and deaf in Hama city. Hossam and his wife told us that their greatest fear during the attack was for Mohammed. His mother told me that if anything would happen to her son, it would break her soul. Both parents described a boy who defies his disability. He is goalkeeper for his community football team and wants to be a footballer when he grows up, failing that, a doctor like his brother Ahmed who attends Hama University. Mohammed rides his bike through his neighbourhood, he maps out the route beforehand. He loves music and his mother told me he has a beautiful voice. I asked Mohammed if he would sing for us and he agreed.

“We behold but we don’t see”

Hossam told me that Mohammed had a favourite plastic glass. He had left the glass on the windowsill of his parents bedroom. In the hours after the attack, Mohammed asked his father where his glass was. Hossam feared that it would have been destroyed. But the window had imploded sending glass flying and twisting the metal frame. The glass was still upright on the windowsill, untouched. For Hossam and his wife, this was a small miracle, a symbol of hope. I see this so often, in war, among people who have so little to call their own. An item of insignificance for most of us becomes a precious token of survival.

The might of Israel, the power of Washington’s interventionist alliance, the horror of war, the poverty of sanctions, nothing can erode this belief in their ability to withstand the darkness and to find the inextinguishable light that is at the core of their resilience. This is the impenetrable wall of resistance that has enabled Syria and Syrians to survive ten years of collective and devastating war and economic punishment and it is built on the ancient foundations of history, heritage, culture and refusal to kneel or capitulate to external, hostile influences. This wall will never fall.