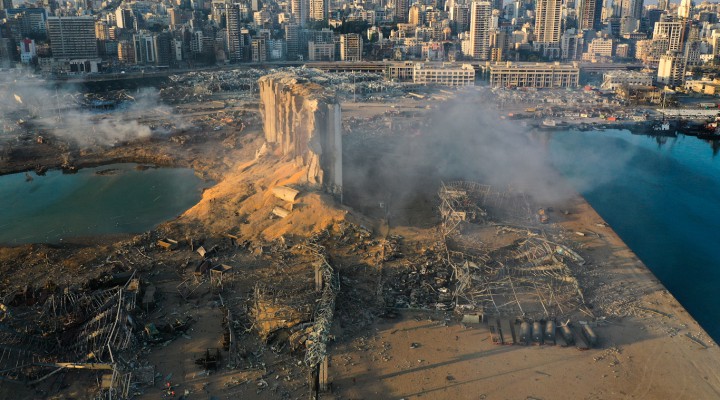 With Lebanon already suffering from a food crisis, currency collapse, and economic sanctions, the devastating explosion at Beirut’s biggest port may be a death knell for the country’s economy.

MPN– Lebanon’s Prime Minister Hassan Diab today called for a day of national mourning after a massive explosion ripped through the capital Beirut yesterday, killing at least 100 people and injuring at least 4,000 others. The extent of the damage is immense; the city’s governor Marwan Abboud estimated that up to 300,000 have immediately been made homeless and that the blast has caused $5 billion worth of damage. Last night Diab addressed the nation: “What happened today will not pass without accountability,” he said, “those responsible for this catastrophe will pay the price.”

What the hell is this? Extensive explosions with an unmatched impact, you can see.
May Allah protect people of #Beirut pic.twitter.com/Hk0Axdifxo

While some, including President Trump, have suggested foul play, the most likely explanation was a fire and explosion at the city’s port, where some 2,700 tons of ammonium nitrate was being stored. A cheap fertilizer, when kept in large quantities, it can generate enough heat on its own to spark a fire or explode on its own accord. The intense heat of the Lebanese summer no doubt contributed to the danger. Diab claimed that the explosive material had been improperly stored at the port “for years.” Port officials have been put under house arrest pending an investigation.

The port of #Beirut before and after today’s catastrophic explosion. #Lebanon pic.twitter.com/La5G2zQ3c2

Survivors immediately began sharing images of the destruction on social media. The blast destroyed the crowded city center, with buildings as far as two kilometers away from the epicenter collapsing. Hospitals were inundated, with arrivals being treated by overwhelmed staff in blood-covered hallways. Medical centers are appealing for blood donors to come forward to meet the unusual demand. Cars across the city were upended by the blast that was heard as far away as Cyprus. Aid teams from Russia, the E.U. and Turkey have announced they will travel to the Middle Eastern nation to help.

“It hit the economic center, all major hotels, every single building in the city. Nothing was left untouched. I went around Beirut today after the blast. The damage is shocking. Every single residential building, every shop, every hotel, every restaurant, almost nothing left untouched,” wrote Lebanese-American journalist Rania Khalek. Meanwhile, Ghada Alsharif of the Daily Star, the country’s largest English-language newspaper, shared images of her outlet’s offices. The windows were all completely smashed, the floors covered in glass and dirt, and the ceiling appeared to be buckling.

The explosion may prove to be a fatal blow to the already floundering economy. The country is in the midst of a devastating economic meltdown as the Lebanese lira collapsed. While official rates peg the lira at 1,500 to the U.S. dollar, black market rates put the price at around 9,000 per dollar. The country had kept the currency stable with large reserves which they kept by offering extraordinarily high interest rates for wealthy savers. But after they realized there was nothing backing it up, the results were bank runs and galloping inflation.

Food prices, along with shortages and hunger, have increased over the past weeks, with bread both difficult to find and expensive to buy. The total destruction of the port’s silos, where tens of thousands of tons of wheat was stored, has left Lebanon with less than a month’s reserves of grain, according to Economic Minister Raoul Nehme. Worse still, the port was responsible for receiving and storing around 80 percent of Lebanon’s imports (including most of its food), with other port cities like Tyre and Tripoli unable to shoulder the increased load.

Added to the food crisis and fallout from the explosion is the increasing bite of U.S. sanctions, mostly targeted at Syria, but also hitting its Lebanese neighbor. Due in part to sanctions, Lebanon has been unable to buy electricity from its Eastern neighbor, leading to near-constant power outages this summer. Last year, the Trump administration also sanctioned a Lebanese bank for its supposed cooperation with Hezbollah, an act that further drained the economy.

Beirut’s hospitals, already battling a sharp increase in COVID-19 cases, are also unable to cope with the sudden influx of patients. Two-thirds of confirmed coronavirus cases have occurred in the past month. With the country’s economy in freefall and hundreds of thousands of newly homeless people, it appears unlikely that the situation will improve in the short term.

“There are no words to describe the scope of destruction in Beirut. I’ve seen the damage from war in Syria and Iraq. But that happened gradually, one neighborhood or street at a time. This was an entire city destroyed in a few minutes. The suffering and misery is unfathomable,” Khalek added.

Feature photo | A drone picture shows the scene of an explosion at the seaport of Beirut, Lebanon, Aug. 5, 2020. Hussein Malla | AP