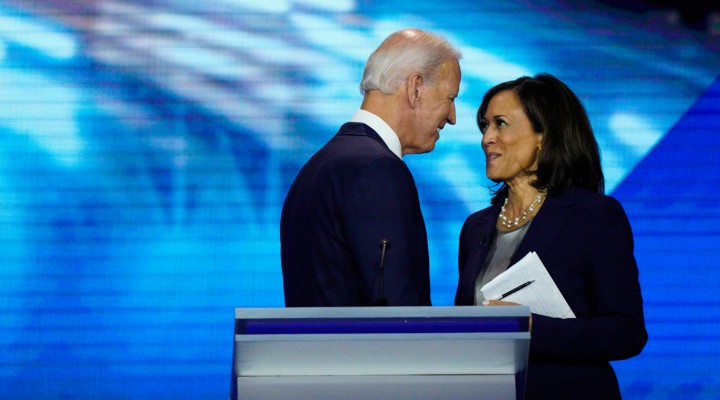 Despite national demands for sweeping police reform, Biden appears likely to choose Kamala Harris, famous for her conservative, “lock them up” stance on crime, as his running mate.

MPN– Amid an anti-police movement that has swept the country, the Democratic Party is choosing to run on a “tough on crime” ticket for November. A new Reuters exclusive reports that California senator and former prosecutor Kamala Harris is the clear favorite for the job of vice-president in a Biden White House. Bookmakers agree, putting Harris’ chances at around 50 percent. No other candidate, according to betting analyst Oddsmaker, has a better than one in ten chance.

The nationwide protests, sparked by the police killing of George Floyd on May 25, have been increasingly led by Black Lives Matter, and the calls to defund or dismantle the entire policing system are growing louder. In response, more than 30 states mobilized the National Guard to quash the unrest. A recent poll found that 74 percent of the country, including 87 percent of Democrats, support the protests, with two-thirds backing Black Lives Matter.

Despite this, Biden is moving towards choosing a running mate that is most famous in activist circles for her conservative, “lock them up” stance when it comes to crime.

A conservative “tough on crime” agenda

As District Attorney of San Francisco, Harris strongly opposed marijuana legalization. Under her jurisdiction, arrests and convictions for the drug increased, as did the percentage of black people arrested for its possession. Yet during her unsuccessful run for the Democratic nomination last year, she laughed and joked about illegally using marijuana herself. During the Democratic debates, she was also accused by Hawaii Congresswoman Tulsi Gabbard of blocking evidence that would have freed an innocent man from a death sentence. Harris was also a vocal supporter of the controversial three strikes law that sent repeat offenders to prison for life. When running for Attorney General, her position was to the right of her Republican opponent.

Nevertheless, many in the business world appear very excited about the potential pick. “She understands the moment,” claimed Marc Lasry, Chairman of the Avenue Capital Group and a member of Biden’s national finance committee, “They want someone who will galvanize people. She seems to be that person.”

It seems unlikely, however, that either Biden or Harris will galvanize protestors demanding racial justice. Biden’s 1994 Crime Bill imposed the three strikes rule, leading to a great increase in the number of people in prison. Between 1994 and 1998, the total number of people in U.S. prisons rose by 19 percent and continued climbing for a decade longer. Biden himself began his political career by opposing racial desegregation and bussing, something that Harris grilled him on in the Democratic debates. “There was a little girl in California who was part of the second class to integrate her public schools and she was bused to school every day. That little girl was me,” she said directly to him.

“Shoot them in the leg”

The former Delaware senator has categorically rejected calls to defund the police. In fact, he is currently proposing giving them more money. Scenes of police brutality across the nation shocked the world to the extent that other countries have halted the sale of tear gas and rubber bullets to the U.S. Yet the extent of Biden’s criticism of law enforcement is that they should shoot protestors’ legs, rather than their torsos. He has also called for a nationwide ban on chokeholds. However, without penalties for using these holds, the legislation means little. The NYPD has long banned chokeholds. Yet Officer Daniel Pantaleo killed Eric Garner in 2014 using one, the victim’s last words, “I can’t breathe” becoming a rallying cry for activists. Pantaleo was not indicted and was only fired more than five years later. Given their backgrounds, Biden and his vice-president are unlikely to enforce laws to prosecute the police.

Indeed, Minnesota Senator Amy Klobuchar, another frontrunner for the VP job, actively shielded killer police from justice. In 2006, while she was state prosecutor, Chauvin shot and killed a man while on duty and was not charged. He would later go on to kill again. MintPress News was the first outlet to break the story. Since it emerged, Klobuchar has fallen from the favorite to a 25-to-1 outsider, according to bookmakers.

The increasingly likely choice of Harris represents a decision to pursue a conservative “tough on crime” agenda for November and is unlikely to engage non-voters or the insurgent progressive wing of the party, whose candidate, Bernie Sanders, almost won the nomination himself. It also risks being interpreted as tone deaf by many black constituents. While Trump’s handling of the COVID-19 pandemic and the protests have allowed Biden to open up a wide lead over him in the polls, there remains a lack of public enthusiasm for the former vice-president. Only 24 percent of Democrats say they are enthusiastic about their party’s choice for president, which could lead to a very weak ground game come November. However, with almost five months until the election and considering all that has happened in the first five months of this year, only a fool would feel certain of what is to come.

0 thoughts on “Amid George Floyd Protests, Democrats Are Choosing a “Tough on Crime” Ticket”