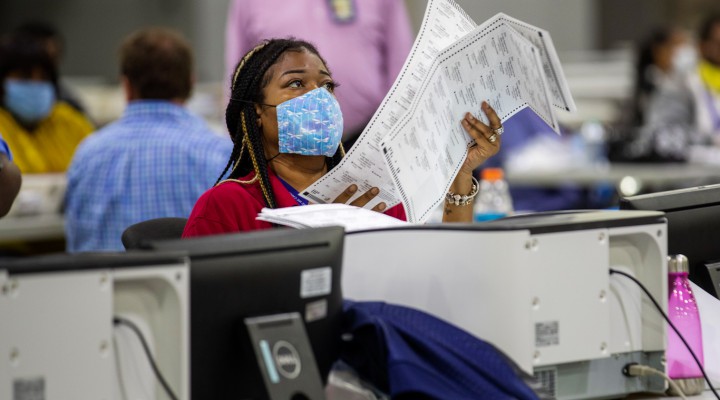 Georgia is shaping up to be an unlikely battleground state in the November presidential election, and if Trump loses Georgia, his chances of overall victory are slim.

MPN– Chaos and dysfunction ruled yesterday, as Georgians went to the polls amid a pandemic that has already claimed over 2,000 lives in the state. Within minutes, many of the state’s new voting machines had crashed, resulting in massive waits for voters – up to four and a half hours in some localities. June temperatures topped 90 degrees, with many forced to stand in line until after 11 p.m. to cast their ballot. Mayor of Atlanta, Keisha Lance Bottoms, issued a plea to voters to persevere through the difficulties. “If you are in line, PLEASE do not allow your vote to be suppressed. PLEASE stay in line. They should offer you a provisional ballot if the machines are not working,” she wrote, but paper ballots also ran out in some places.

Postal voting had its problems, too. Even Stacey Abrams, tipped by many to be Joe Biden’s running mate in November, could not use her absentee ballot as the envelope arrived sealed shut. Another problem encountered was the lack of trained staff at stations. The average age of a poll worker in Georgia is 70, and concerns over working in an enclosed public space in the middle of a pandemic that particularly affects the elderly doubtless kept many away.

This drone footage shows a long line of voters waiting to cast ballots in Atlanta on Tuesday. Georgia election officials, poll workers and voters have reported major trouble with voting in Atlanta and elsewhere.

Or at least that was the situation in many of the poorer neighborhoods of the state, where the population is often predominantly black. In the affluent white suburbs of Atlanta, reports suggest the day went ahead without major incidents. Georgians were voting for district, state and national representatives, although the latter is more of a formality for both Democrats and Republicans. Kristen Clarke, president of the group the Lawyers’ Committee for Civil Rights Under Law, described the situation as catastrophic. “If we view the primary election as a dry run for November, then Georgia gets an F today,” she said.

But others saw the situation differently: not as an error, but as a well-planned triumph of election malfeasance. In response to the scenes of long lines and frustration, Congresswoman Alexandria Ocasio-Cortez stated that “Republicans don’t want vote by mail because it chips away at their ability to do exactly this: target and disenfranchise black voters and people of color. These scenes are specifically happening in black communities, not white ones,” she said, “This is by design and it’s their test run for November.” Pramila Jayapal, co-chair of the Congressional Progressive Caucus agreed, “This is no accident. Black and brown people have been kept out of our elections – 100% on purpose and by design,” she wrote. Amid the fiasco, the state’s (Republican) Attorney General has opened up an investigation, while calls for the United Nations to monitor the elections in November are growing louder.

Georgia was the scene of intense struggle over the right to vote during the Civil Rights era, as racists attempted to block black Americans from going to the polls. Since the Shelby County vs. Holder decision of 2013, Southern states have closed over 1,200 polling stations, with Georgia being a particularly bad offender, shuttering 214. Perhaps more troubling is the specificity of so many of the closures. Eighteen Georgian counties have closed more than half of their polling places, and several have shut down almost 90 percent, according to a 2019 report. Abrams, who ran for Governor of Georgia herself in 2018, accused her opponent Brian Kemp of voter suppression after he put on hold more than 53,000 voter registration applications, nearly 70 percent of which belonged to African-Americans. Basketball legend LeBron James understood the situation well: “Everyone talking about ‘how do we fix this?’ They say ‘go out and vote?’ What about asking if how we vote is also structurally racist?” he asked.

Once again, this is at the Sandtown precinct in South Fulton County. Folks are not being allowed to vote. Period. What is going on here? But we will persist and make sure our votes get cast. They appear to be deliberately slowing down the number of folks who will vote today. pic.twitter.com/gqFSVqrUEn

Georgia is shaping up to be an unlikely battleground state in the November presidential election, and if Trump loses Georgia, his chances of overall victory are slim. The president’s handling of the pandemic, which has officially killed over 114,000 Americans and his heavy-handed response to the George Floyd protests have seen his approval ratings fall. Despite keeping a very low profile, Biden has increased his lead in polling to over eight points since late May.

Thus, if Trump is to win in November, low turnout, particularly among voters of color, would be beneficial. What happened yesterday was the best of both worlds for the president; suppression of the minority vote and enough confusion and chaos to allow him to question the legitimacy of the elections if things do not pan out his way.