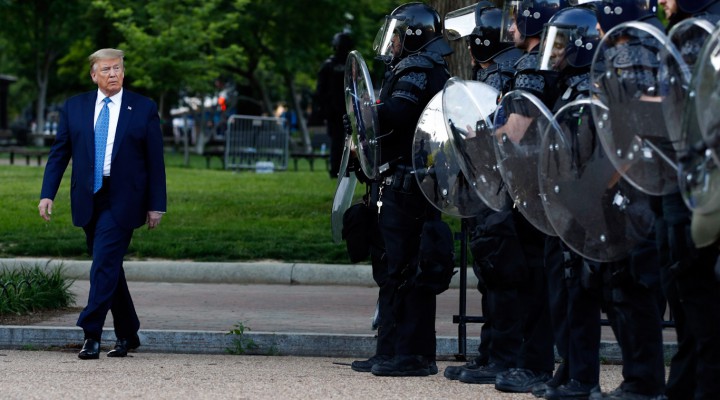 Even amidst an unprecedented nationwide crackdown on protesters, the Democratic-controlled House of Representatives overwhelmingly voted to reauthorize the questionably named USA FREEDOM Act.

MPN– Even as the president has overseen a nationwide wave of police brutality in response to the George Floyd protests, Democrats are voting to increase the executive branch and the national security state’s powers. Last week, the Democratic-controlled House of Representatives overwhelmingly voted to reauthorize the questionably named USA FREEDOM Act, an updated and amended version of the 2001 PATRIOT Act. Signed into law in the wake of the September 11 attacks, the PATRIOT Act authorized sweeping new governmental powers to infringe upon civil liberties, including the indefinite detention of immigrants and those designated as “terrorists,” the ability for police to search homes and businesses without the occupant’s consent or knowledge, allow the authorities to go through telephone, email and other records without a court order, and gave police and government agencies greatly expanded powers to repress.

The act, sponsored by prominent New York Democrat Jerry Nadler, was passed 284 to 122, despite the efforts of prominent progressives like Alexandria Ocasio-Cortez( D-NY), Ilhan Omar (D-NY), Ro Khanna (D-CA), and Pramila Jayapal (D-WA), who opposed it. Speaker of the House Nancy Pelosi (D-CA) urged her fellow Democrats to vote the legislation through, claiming that “If we don’t have a bill” then “our civil liberties are less protected.”

Earlier in May, the bill was passed 80-16 by the Senate, who rejected Senator Rand Paul’s amendment preventing Foreign Intelligence Surveillance Act (FISA) warrants being used against Americans. “The Patriot Act, in the end, is not patriotic. The Patriot Act makes an unholy and unconstitutional exchange of liberty for a false sense of security. And I, for one, will oppose its reauthorization,” Paul argued, to no avail.

Trump has responded to the protests flaring up in over 100 American cities with a heavy hand. Police have been responsible for countless attacks against protesters and press alike, with the president deploying the National Guard in 24 states. More alarmingly, he has encouraged them to shoot whomever they deem “thugs” and “looters.” “When the looting starts, the shooting starts,” he tweeted. He has also threatened to let the army loose across the country to ‘defend” residents. Yet a Morning Consult poll found that 54 percent of Americans support the protestors, with only 22 percent (and only 38 percent of Republicans) opposed to them. Democrats overwhelmingly support them, 69 percent to 13 percent against.

Despite this, prominent Democrats have condemned the events. New York Governor Andrew Cuomo denounced many New Yorkers’ behavior, saying that we have to “separate the protestors from the looting.” “They demean Mr. Floyd’s murder by using it as an excuse for criminal activity,” he added, as he imposed a curfew. And even as New York City cops were plowing their vehicles through crowds of protestors and brutalizing young women, Mayor de Blasio excoriated the protestors, saying he was going to “beat” them back. “We will not tolerate violence of any kind. We will not tolerate attacks on police officers. We will not tolerate hatred being created…an attack on police officers is an attack on all of us. Pure and simple,” he added, without specifying who “us” referred to.

Even in Pelosi and Senate Minority Leader Chuck Schumer’s joint speech against Trump’s handling of the situation, much of the criticism leveled at the president was for his bad optics, rather than for the 9,000 arrests, 13 deaths, and countless hospitalizations. “At a time when our country cries out for unification, this President is ripping it apart. Tear-gassing peaceful protestors without provocation just so that the president could pose for photos outside a church dishonors every value that faith teaches us,” they wrote. Meanwhile, the extent of criticism presumptive Democratic presidential nominee Joe Biden had for the police was to advise them to shoot protesters in the leg, rather than in the torso.

This the #McResistance in a nutshell. Performative symbolism while not using her power to do anything substantive to challenge Trump. https://t.co/6BwbBAOGpE

The tactic of rhetorically opposing Trump’s actions while, in practice, bolstering them fits a years-long pattern of behavior for many top Democrats. Despite labeling him a dangerous fascist who would be an erratic and irresponsible commander-in-chief, Democrats rubber-stamped his increases in the military budget and his judicial appointments, rather than oppose them. And on Venezuela, they gave Trump’s handpicked Venezuela mouthpiece Juan Guaidó a standing ovation at the State of the Union Address in February.

David Sirota, speechwriter, and advisor to insurgent presidential challenger Bernie Sanders laid out a checklist of ten concrete actions Democrats could take now to actually limit Trump’s authoritarianism. These included opposing his Pentagon spending bill, calling his bluff, and using his federal budget bill to defund the police, restrict the National Guard, and cease taking contributions from police associations. However, if history is any judge, the party establishment will side with their supposed adversaries in the Republican party over the American people.

Feature photo | President Donald Trump walks past police in Lafayette Park after he visited outside St. John’s Church across from the White House, June 1, 2020, in Washington. Part of the church was set on fire during protests on Sunday night. Patrick Semansky | AP