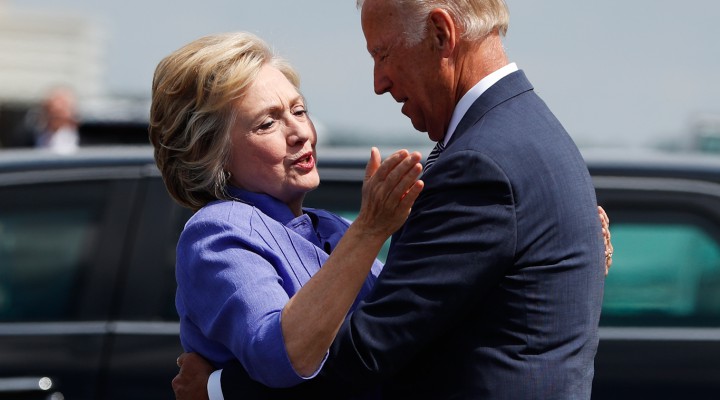 Some are describing the prospect of Biden-Clinton ticket as a “kiss of death” for the Biden campaign.

Throughout the conversation, where Biden positioned himself as a champion of women and an ally to the #MeToo movement, neither Clinton or Biden addressed the multiple women who have accused the former vice-president of inappropriate touching, nor the newest allegations by his former staffer, Tara Reade, who claims he sexually assaulted her in the Capitol Building in 1993.

Biden has been adamant that he will select a woman as his running mate and that he will choose someone from the right of the party (even floating the idea of choosing a Republican VP). Yesterday’s event fueled speculation that Clinton is in the running to return to the White House. The former senator from New York famously blew an enormous lead over Donald Trump – enjoying a 15-point advantage over the businessman and TV show host as late as the last week of campaigning. In October, a Morning Consult poll found that continued apathy and ill will towards her meant that a Clinton endorsement would be a net negative for any of the candidates in the running. Thus, some described the latest announcement as a “kiss of death” for the Biden campaign.

The women’s town hall did not go particularly smoothly, with the participants not realizing they were live for almost 25 seconds. Biden also appeared to momentarily fall asleep as Clinton was talking. The former Delaware senator stormed into the lead on Super Tuesday, winning the majority of the states on offer, but has still found it difficult to engage and extend his message online. His YouTube channel that broadcast the event has only 47,000 subscribers (in comparison, Donald Trump has 381,000 and Bernie Sanders has nearly 400,000). As of Wednesday, the town hall has 60,000 views and more than double the dislikes as likes.

The COVID-19 pandemic has raged particularly hard through the United States, with official figures showing more than one million Americans have been infected and over 59,000 dead. However, other projections suggest far higher numbers than official reports. Nearly half of all New Yorkers, for instance, know someone who has already died of the virus. For weeks, President Trump insisted the coronavirus was a “hoax” intended to force him out of the White House, claiming in February that, by April and the warmer weather, that the virus would “disappear.” Last week he also promoted the idea of injecting bleach into the human body as a cure, saying at a press conference:

I see disinfectant, where it knocks it [coronavirus] out in a minute—one minute—and is there a way we can do something like that by injection inside, or almost a cleaning. Because you see it [coronavirus] gets in the lungs and it does a tremendous number on the lungs, so it’d be interesting to check that.

Meanwhile, Vice-President Pence visited a hospital in Minnesota yesterday, refusing to wear even a mask.

We are so fucked https://t.co/tmfZuvXfLP

Americans appear unable to choose between the two options placed before them, in what is increasingly looking like a rerun of the 2016 contest. A survey from Quinnipiac University last week found that Biden enjoyed a small lead over Trump in the key battleground state of Florida. However, only two percent of respondents claimed they would not vote – an impossibly low number. Biden’s supporters are far less enthusiastic than Trump’s, and it remains uncertain that he can convert his small lead into a political victory. Jamie Peck, a journalist, and producer of the Majority Report political program, summed up the mood among progressives watching the events of 2020 play out: “we are so fucked,” she tweeted.

0 thoughts on ““We are so F****d”: Joe Biden Town Hall Sparks Fears of a Clinton Rerun”