HOME / WORLD / Amid a Violent Crackdown, Bolivia’s Coup Gov’t is Trying to Convict Evo Morales of “Crimes Against Humanity” 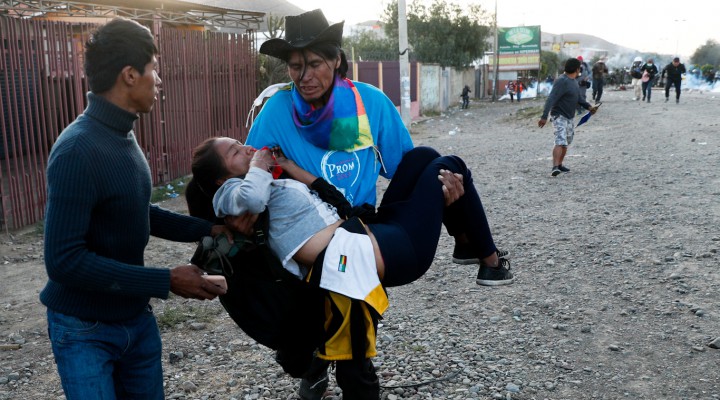 The new Bolivian government’s apparent grave concern for human rights when it comes to Morales may not ring true when judged against their actions in just three short weeks of rule.

MPN– Bolivia’s new coup government is filing a case at the International Criminal Court in The Hague, the Netherlands, against ousted President Evo Morales for alleged “crimes against humanity.” New Interior Minister Arturo Murillo accused Morales of sedition and terrorism, announcing Friday that the official charges will be forthcoming shortly. The ex-President “must answer for what he has done, and is doing, in addition to his accomplices who have participated in the tragic events that Bolivians have experienced” Murillo said. Morales faces up to 30 years in prison if convicted.

Morales was the country’s first indigenous president and had led Bolivia since his inauguration in 2006. He won an unprecedented fourth term in office in October. However, on November 10, army generals publicly demanded his resignation. Bolivia’s majority white opposition also mounted a campaign of intimidation and terror against their opponents in an attempt to force him out of power. Morales fled to Mexico, where center-left President Andres Manuel Lopez Obrador granted him asylum. The ousted leader, for his part, accuses the new “dictatorship” of their own crimes against humanity, claiming that it is carrying out “genocidal policies” against the people of Bolivia.

MintPress News has been closely covering the violence in Bolivia and has multiple journalists on the ground there. At least 33 people have been killed since the October 20 election, and 30 since Morales was overthrown, as the country’s indigenous majority have resisted the new government and been met with force. The new President, Jeanine Añez, whose party received 4% of the vote in the October election, was handpicked by the military to be the new president. She is a strongly conservative Christian who publicly stated her desire to cleanse Bolivia’s cities of indigenous people (the majority of the country’s population), whom she describes as “satanic.” Añez immediately declared that she was “committed to taking all measures necessary to pacify” the population. She and Murillo signed a decree pre-exonerating the country’s infamous security forces of all crimes during the “re-establishment of order,” effectively giving them a license to kill, something which has been used frequently, as the military has conducted massacres in the city of El Alto and the town of Senkata just outside it.

CodePink founder and MintPress News contributor Medea Benjamin was at the scene of the Senkata killings, witnessing the fallout from the massacre. She describes how a local church became “an improvised morgue,” with doctors conducting autopsies on bodies laid on pews, many still dripping with blood, seeing dozens of people with bullet wounds and listening to the anguished yells of the fallen: “They’re killing us like dogs”, one woman said to her.

Benjamin claims that few people inside the country know the extent of the government’s repression as local media has not reported on it. This is because, she explains, new Communications Minister Roxana Lizárraga has threatened to charge journalists with sedition should they spread “disinformation.” The media itself has been under attack; TeleSUR and RT have been taken off the air, multiple journalists have been shot, and Al-Jazeera correspondent Teresa Bo was tear-gassed in the face live on air at point black range as she stood alone, reporting to the camera.

Al Jazeera's @TeresaBo has been intentionally tear-gassed in the eyes by Bolivian police while on air. She was simply trying to report what was happening. And, being a total pro, she kept right on doing it. pic.twitter.com/74foN7tvRF

Meanwhile, MintPress’ Wyatt Reed reported on how local media sympathetic to the coup were rounding up and detaining independent journalists, handing them over to the army.

Wow.
The whole time I've been in Bolivia I've heard about the "prensa vendida," aka the sellout press. Watch here as they harass an independent journalist, keep him from doing the job they *should* be doing, then hand deliver him to the army!
Anyone who shows this gets shut down. pic.twitter.com/wY5dwgu4lS

Murillo himself claimed that he would use the full extent of his new power to “go after” and incarcerate people committing “sedition,” a crime defined as opposing the government’s authority. He also explained how he was persecuting Morales’ ministers in the government, describing the action as “hunting down” “animals,” something so explicit that even Human Rights Watch, who had whitewashed the coup, balked at.

Benjamin has condemned U.N. Human Rights Commissioner Michelle Bachelet for her inaction on the massacres. “I’m in Bolivia. Why isn’t the U.N.?” she demanded to know. However, any human rights group’s safety would certainly be at risk. Murillo has directly threatened a recently arrived Argentinian human rights group, warning them, “be careful…we are watching you. We are following you”. He also threatened to have them arrested for sedition and terrorism, claiming there would be “zero tolerance” for their actions.

Thus, the new Bolivian government’s apparent grave concern for human rights when it comes to Morales may not ring true when judged against their actions in just three short weeks of rule. The number of further “tragic events,” as Murillo calls them, will depend on the amount of continued resistance to his rule. The future of Bolivia continues to hang in the balance.

Alfred de Zayas: As a Whistleblower, Julian Assange Has Done What Every Democrat Should Do, Namely Uncover the Cover-Ups of Our Governments

One thought on “Amid a Violent Crackdown, Bolivia’s Coup Gov’t is Trying to Convict Evo Morales of “Crimes Against Humanity””