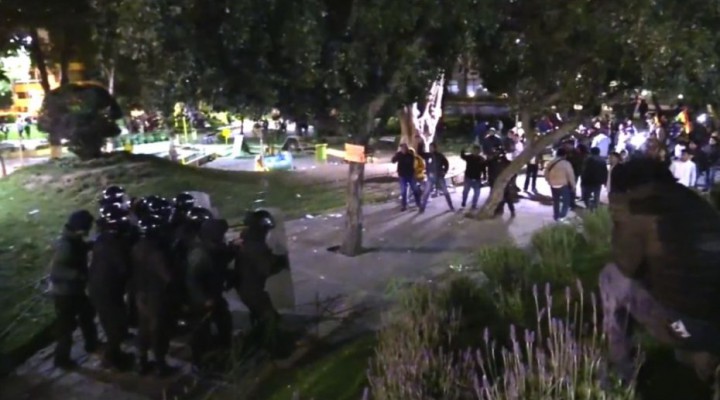 As the United States celebrates its annual Thanksgiving Day this week, the indigenous people of Bolivia are being slaughtered by a US-backed coup unfolding in the Andean nation.

Apt it is, in a heinous way, that as the United States celebrates its annual Thanksgiving Day this week, the indigenous people of Bolivia are being slaughtered by a US-backed coup unfolding in the Andean nation.

When former President Evo Morales was threatened out of office on November 10 by orchestrated, massive street violence, US President Donald Trump hailed it “a great day for democracy”. What Trump meant was “a great day for plutocracy”. The new regime in Laz Paz is the colonial-descendant, ruling class back in power, rolling back the gains made after 14 years of progressive socialism and democracy for the indigenous majority of Bolivians.

The coup was carried off by Washington’s smearing of Morales’ re-election on October 20 and by fascist paramilitaries directed by Bolivian oligarchs who are well connected in Washington, as documented by Max Blumenthal and Ben Norton.

The Bolivian oligarchs and their supporters espouse a rightwing Christian fundamentalism which disparages the indigenous culture as pagan. The violent racism towards the indigenous majority was expressed by the self-declared “interim president”, Jeannie Anez, who, like other oligarchic figures, denounced the native and largely poor population as “satanic”.

The takeover in Bolivia is as much about taking control of the country’s wealth – natural gas and minerals – as it about a racist revenge on the native Indian population who dared to rule the country under Morales’ leadership for the benefit of the poor majority.

Morales has been warned that if he returns from exile in Mexico he will be jailed for terrorism. The new regime has instructed state forces to “hunt down” members of Morales’ Movement to Socialism (MAS) party. It has given impunity for the police and army to shoot dead protesters who are holding strikes and other demonstrations against the new regime. The latter made earlier promises to hold new elections – without MAS being allowed to participate despite the party having a majority of lawmakers in the country’s Congress. It looks like even those hollow promises are now being scrapped.

Since Morales was ousted, over 30 people have been killed and hundreds injured as state forces fire live rounds at unarmed protesters. Reporting from on the ground, Medea Benjamin says the indigenous communities are living in fear of increasing atrocities and the return to the old days of military dictatorship.

In one incident in El Alto on November 19, army and police, reinforced with helicopters, killed eight people, including children, who were among MAS supporters holding an unarmed strike against the new regime.

“I saw the doctors and nurses desperately trying to save lives, carrying out emergency surgeries in difficult conditions with a shortage of medical equipment,” reported Benjamin. “I saw five dead bodies and dozens of people with bullet wounds… A grieving mother whose son was shot cried out between sobs: ‘They’re killing us like dogs’.”

The coup in Bolivia is consistent with the wider historical perspective of Indian Wars waged for centuries across the entire American continent. From the Spanish and Portuguese conquistadors in the 15th century who wiped out the Mayan and smaller Andean civilizations in the central and southern continent, to the later British and other European colonialists who dispossessed and destroyed the native tribes in the north in what became the United States and Canada.

It may sound cliched, but nevertheless should never be forgotten that the United States and other modern American states were built on genocide of the native populations. That genocide has never been properly atoned for. Existing American-Indians live in predominantly marginalized, impoverished conditions. Their bountiful lands stolen and poisoned by industrial capitalism.

Official celebrations like Thanksgiving and Columbus Day stick in the craw because they sanitize the real and brutal history of the US being founded on barbaric crimes against humanity.

If there is no official acknowledgment – let alone atonement – for the exterminatory foundations of the US, and its economic and military power, then no wonder that the state permits itself to continue waging wars and subversions against other nations. It is above the law because it always has been above the law from its very inception.

The Hollywood-like depiction of Thanksgiving tells us that English settlers arriving on the northeast coast in the early 1600s were befriended by the indigenous people who shared their food and showed the foreigners how to survive harsh winters. What gets lopped out from this rosy narrative is the subsequent centuries when the European colonizers expanded their rapacious land-grabbing and pushed the natives to extinction, often by slaughtering them in their camps.

Native American elder Leonard Peltier (now 75), who has been in jail for nearly 40 years on a trumped-up conviction for killing two FBI officers, wrote the following reflection for this year’s Thanksgiving: “As I let my mind wander beyond the steel bars and concrete walls, I try to imagine what the people who live outside the prison gates are doing, and what they are thinking. Do they ever think of the indigenous people who were forced from their homelands? Do they understand that with every step they take, no matter the direction, that they are walking on stolen land? Can they imagine, even for one minute, what it was like to watch the suffering of the women, the children and babies and yes, the sick and elderly, as they were made to keep pushing west in freezing temperatures, with little or no food? These were my people and this was our land.”

In his reflection, Leonard Peltier makes a direction connection with the coup in Bolivia to past crimes against the indigenous people of all America.

“We also remember our brothers and sisters of Bolivia, who are rioting, in support of the first indigenous President, Evo Morales. His commitment to the people, the land, their resources and protection against corruption is commendable. We recognize and identify with that struggle so well,” he writes.

The crime against Bolivia is allowed to happen because the US by and large is held in a condition of historical amnesia by its plutocratic system and its obedient corporate mass media. Thanksgiving Day is followed by a day of consumerist frenzy, known as Black Friday, when crowds queue up for shops to open their doors for sales. People fill up their empty lives with cheap gadgets and techno-fetichism. And so plutocrats like Trump and his evangelical Christian cabinet can espouse the crass nonsense that what is happening in Bolivia is “a great day for democracy”.

As Canadian singer-songwriter Bruce Cockburn put it beautifully: “You thought it was over but it’s just like before. Will there never be an end to the Indian Wars?”

0 thoughts on “Bolivian Coup and Indian Wars on Thanksgiving”