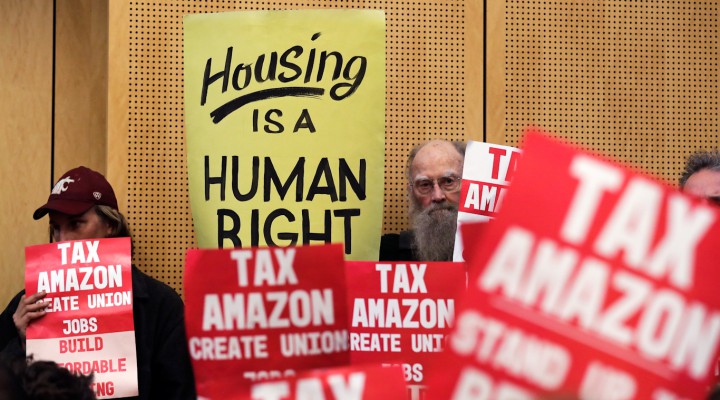 New figures from the Institute for Policy Studies show that, despite a pandemic that has stunted the economy for months, America’s billionaire class is becoming richer than ever, adding nearly $700 billion to their fortune since the nationwide lockdown in March.

MPN– For the first time in history, the 12 richest individuals in the United States collectively hold over $1 trillion in wealth. New figures from the Program on Inequality and the Common Good at the Institute for Policy Studies (IPS) show that, despite a pandemic that has stunted the economy for months, America’s billionaire class is becoming richer than ever, adding nearly $700 billion to their fortune since the nationwide lockdown in March, now holding $1.015 trillion. Speaking with MintPress today, the IPS’ Chuck Collins described his findings as a “disturbing milestone in the history of extreme inequality in the U.S.” adding:

This despotic dozen has tremendous power and wealth related to their control of the technological platforms and digital commons that we all depend on.”

Included on the list are figures like Amazon founder Jeff Bezos, the world’s richest living individual, who has nearly doubled his fortune to an estimated $189 billion, and Tesla Motors CEO Elon Musk, who saw his personal net worth triple to $73 billion in the last six months.

The news of these billionaires’ growing fortunes comes amid record stock market gains. Yesterday, the S&P 500, an index measuring the performance of America’s 500 largest corporations, reached an all time high, closing at 3,389.78, breaking the previous record set in February.

Few Americans, however, are feeling any benefits. The coronavirus pandemic has wrought a terrible economic and social cost on the country, with an estimated 26 million going hungry in the last week, 40 million facing eviction from their homes, and around 55 million filing for unemployment benefits since March. Food banks across the country have seen great increases in demand and, in some cases, are struggling to meet it.

President Trump has many times touted the surging stock market as a reflection of his administration’s competence, mirroring the 1950s slogan “what’s good for General Motors is good for the country.” However, few appear to accept Trump’s word on it. Dean Baker, Senior Economist at the Center for Economic Policy Research in Washington, D.C., told MintPress that, “Stocks measure the expected value of future corporate profits. With the labor market weak and likely to remain so for a while, wages are likely to lag productivity, which will be good for profits. Also, continued low interest rates mean there are not good alternatives to stock” — something that raises the question of for whom is the economy currently working. “It is a societal failure when so much wealth and power are in so few hands,” said Collins.

The full list of 12 plutocrats and their quickly rising net worth are as follows:

Of the twelve, five have taken a pledge to give away at least half of their wealth during their lifetimes. But only one of those on the list, business tycoon and CEO of Berkshire Hathaway, Warren Buffet, has actually seen his net worth decrease in the past six months. Bezos, whom some are predicting will be the world’s first trillionaire, has not, and is asking the public for donations to help his 800,000 employees through the pandemic. One-third of Amazon employees in Arizona are on food stamps, with other states not faring that much better.

While working-class Americans have had to make do with one $1,200 government check, the country’s billionaires have been most carefully looked after. A report from the Joint Committee on Taxation, a nonpartisan congressional body, found that 82 percent of the tax breaks from the Trump administrations Coronavirus Aid, Relief, and Economic Security (CARES) Act went to those making over $1 million annually, with the super-wealthy feeling the most benefits. And as the government has gone on vacation until September, it is unlikely that any relief will arrive in the near future.

Nevertheless, serious changes are necessary, both over the short and long terms. “Without any significant reforms — which include an excess profits tax, a wealth tax and a progressive estate tax — wealth will continue to concentrate in the hands of a small minority and worsen inequality in the future,” said Collins’ colleague at the Program on Inequality and the Common Good, Omar Ocampo. With Trump promising another large tax cut, the problem of wealth inequality is likely to get worse rather than better.

Feature photo | Members of the public look on at a Seattle City Council before the council voted to approve a tax on large businesses such as Amazon and Starbucks to fight homelessness in Seattle. Elaine Thompson | AP

0 thoughts on ““A Disturbing Milestone”: America’s Top 12 Plutocrats Now Own $1 Trillion in Wealth”