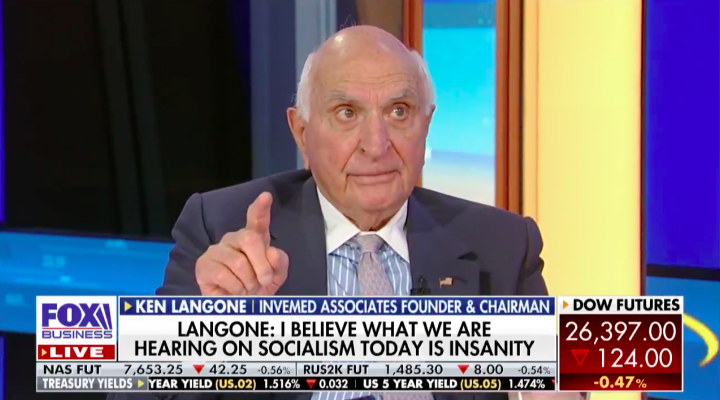 According to Bloomberg this humble response from the always modest billionaire Steve Schwarzman came in response to a question posed by an audience member about a Sanders tweet in which the Vermont Senator said that billionaires should not exist. The comment was reportedly met with enthusiastic applause.

Blackstone CEO Schwarzman, who has previously compared tax increases on the wealthy to the Nazi invasion of Poland, is an oligarch by any reasonable definition. As one of America’s top individual campaign donors he is immensely influential; his plutocratic power is so deeply interwoven with the highest levels of government that his book’s 14 pages of acknowledgements describe cuddly relationships with a who’s-who of top US officials, including the last five presidents. According to a recent report by The Intercept, two Brazilian firms owned by Schwarzman “are significantly responsible for the ongoing destruction of the Amazon rainforest, carnage that has developed into raging fires that have captivated global attention.”

It is very telling that this oligarch sees an equivalence between (A) saying that an elite class should not control such vast amounts of wealth and (B) saying actual people should not exist. What this tells us is that Schwarzman sees being a billionaire as a fundamental part of his identity, making the idea that he shouldn’t control billions of dollars indistinguishable from saying that he himself should not exist. From his point of view he’s just doing the same thing that Sanders is doing: Bernie’s saying the thing that Schwarzman is shouldn’t exist, and Schwarzman is saying that Bernie himself shouldn’t exist. To him they’re the same.

This statement gives us a bit of insight into the way billionaires see themselves as fundamentally different than the rest of us, forming an egoic identity construct out of being a billionaire in the same way a medieval king would form an egoic identity construct out of that position. This anti-billionaire rhetoric is perceived as an attack on their very identity, which is why they are spinning it as though Sanders is calling for the elimination of actual people.

“What the hell has he done for the little people?” Langone asked his hostMaria Bartiromo. “What jobs has he created?”

Langone went on to detail all the many jobs he’s “created” (read: how many people he’s needed to hire to help him reap lucrative profits from an already existing demand) without bothering to explain what hoarding billions of dollars in offshore accounts has to do with job creation. Exponents of the “billionaires create jobs” argument always avoid this glaring plot hole like the plague.

Again, we see in Langone’s emotional response two things: that he sees ordinary citizens as “the little people” innately different from himself, and that he perceives the push toward greater economic equality as an existential threat.

“If you go back to 1933, with different words, this is what Hitler was saying in Germany,” Langone has said of the rising pushback against wealth and income inequality. “You don’t survive as a society if you encourage and thrive on envy or jealousy.”

These outbursts are reminiscent of one we saw a couple of years ago on an MSNBC interview with resort tycoon Stephen Cloobeck, who expressed outrage at the way progressives are using “the millionaire or billionaire word” to discuss issues with class and economic justice, saying he’d instructed Democratic Party leaders to bring a stop to this rhetoric or lose plutocratic funding.

“It is very, very disturbing when I hear the millionaire or billionaire word,” Cloobeck said, as though he was uttering an ethnic slur for an oppressed minority and not a conventional label for a class that effectively owns the US government. “And I’ve told them to stop it. Knock it off.”

We’re seeing this hilarious conflation of economic justice with the persecution of minorities and the elimination of actual human beings more and more often, so we should probably come up with a name for it. I’d like to propose that we label this phenomenon “wealth identity politics”, and it is capitalism’s dumbest turn yet.

It’s especially dumb because the billionaire class has already proven with its actions that it cannot exist without actively working to manipulate governments in a way that undeniably subverts democracy and the will of the people. The debate over whether or not billionaires should exist is long settled. They should not.

A few million dollars will buy you a nice car, a nice house and some nice clothes. A few billion dollars will buy you the ability to control public narratives using media ownership, lobbyists and think tanks, thereby manipulating entire governments and international affairs. Believing that it makes sense to have an elite class which controls this much wealth and power is exactly as stupid as believing it makes sense to have a total monarchy.

Billionaires should not exist, for the same reason that kings and pharaohs should not exist. The leadership of our world should not belong to a class of highly mediocre people who have nothing noteworthy between their ears apart from a knack for accumulating dollars. The ability to amass wealth is not a valid basis upon which to determine who leads us. Our fate as a species should be in all our hands.