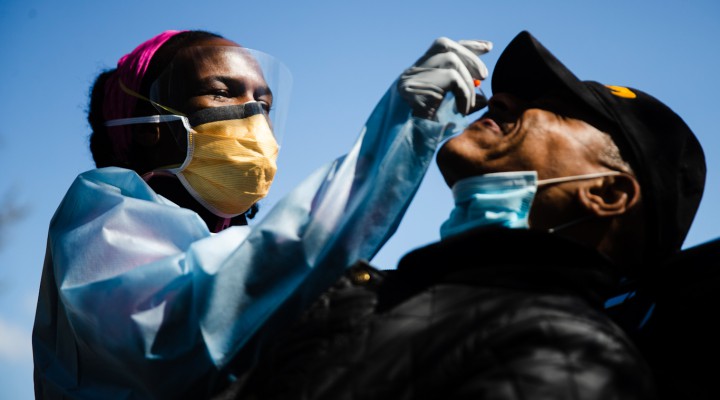 Black Americans are dying at almost three times the rate whites are, with Latinos and Native Americans also dying at elevated levels to the rest of the population.

MPN– The United States continues to lift emergency COVID-19 restrictions, even as infection rates continue to climb in many states. June 18 and 19 saw over 33,000 new cases each, among the highest daily totals since the pandemic began. Economically, the pressure for tens of millions has not been lifted at all and new data from the Institute for Policy Studies (IPS) shows that over 45.5 million Americans have filed for unemployment since the lockdown was announced. An untold number of businesses have permanently shuttered, with entire industries like tourism, sports, education and catering facing uncertain futures. Even the American Pyrotechnics Association requested a bailout, warning that cancellation of July 4 fireworks displays will create mass bankruptcies throughout the industry.

Yet one group that has fared exceptionally well is the world’s ultra-wealthy. Since the shutdown began on March 18, America’s billionaire class has seen their wealth grow by $584 billion, or 20 percent. Amazon CEO Jeff Bezos, again the world’s richest individual, has added nearly $44 billion to his fortune in the last three months, and is now worth an estimated $156.8 billion, according to the IPS. Some, like Twitter co-founder Jack Dorsey, have more than doubled their wealth.

How can you watch billionaires grow their wealth by $584,000,000,000 during a pandemic that throws 44 million Americans into unemployment and not think the system needs to fundamentally change?

These extreme levels of concentrated wealth among billionaires and the racial wealth divide are not sustainable. This gap is fueling economic volatility, a breakdown in civic life, and deep and legitimate anger at an economy rigged in favor of the wealthy.”

“The marker of centuries of injustice”

America’s minority communities have been hit especially hard by the pandemic, both medically and economically. Black Americans are dying at almost three times the rate whites are, with Latinos and Native Americans also dying at elevated levels to the rest of the population. This is due primarily down to structural and historic factors, rather than genetics, with centuries of injustice leading to a myriad of economic and medical inequalities making infection and death more likely for certain groups. Minorities disproportionately hold low-paid jobs that are impossible to do from home, leading to economic ruin for many. The IPS’ calculations find that the 640 American billionaires now have a combined wealth of $3.58 trillion — more than the entire collective wealth of 59 million Latinos in the U.S. ($3.49 trillion).

Perhaps even more startlingly, the 12 richest Americans share a combined wealth of $921 billion, equivalent to the home equity wealth of the entire black population — over 17 million households. “We are living in an intense moment in history — a time when major public policy failures and social inequality are revealing themselves after being obscured by a seemingly strong economy,” wrote the IPS.

“This disparity of wealth is the marker of centuries of injustice, running from the chattel slavery, Jim Crow, separate and unequal, predatory lending, and other forms of systematic discrimination in wealth-building opportunities. This history is reflected in real disparities of wealth in bank accounts, property ownership, and other measures of assets,” Collins told MintPress.

The rapidly expanding class and racial wealth gap, where working- and middle-class Americans were offered only a one-time conditional $1,200 check while the super-wealthy were given tens of billions in tax cuts under the CARES Act, coupled with the mass unemployment the coronavirus brought with it, provided the highly flammable backdrop of discontent. In May, the police killing of unarmed black man George Floyd was the spark that engulfed the nation.

“Behind the anger in the streets at police abuse is the awareness that black, brown, and Native people are disproportionately disenfranchised, suffering, and dying in the pandemic. And behind that is the multi-generational racial wealth divide.  White supremacy is the pre-existing condition to the intensity of the response,” Collins added./

The new IPS report lays out a checklist of eight major policy proposals designed to address the problem of rapidly expanding racial and economic inequality. “We cannot repeat these same mistakes. The program to speed our recovery from the pandemic economy must be designed to reduce the racial asset gap, not inflame it. Surging billionaire wealth contrasting with a worsening racial wealth divide undercuts the solidarity and unity required to overcome the health and economic challenges of this pandemic,” they wrote.

The proposals include four rapid measures:

The four longer-term policies to address the problem include:

The IPS also suggests that progressive taxation, including a millionaire surtax, a financial transaction tax, and tougher estate and wealth taxes on the super rich would improve the functioning and cohesion of society. A 10 percent surtax on the top 0.2 percent of the U.S.(those with incomes over $2 million per year), they calculate, would net around $636 billion over the next ten years. They also call for the shutting down of offshore tax havens, where an estimated $32 trillion is hidden globally.

While COVID-19 is often spoken about as if it is a thing of the past, the rate of infections is increasing in 23 states, some almost exponentially, sparking fears of the dreaded “second wave.” Given what happened during the previous shutdown, if another one is to occur, it will likely be the poorest and most vulnerable communities who suffer the most.