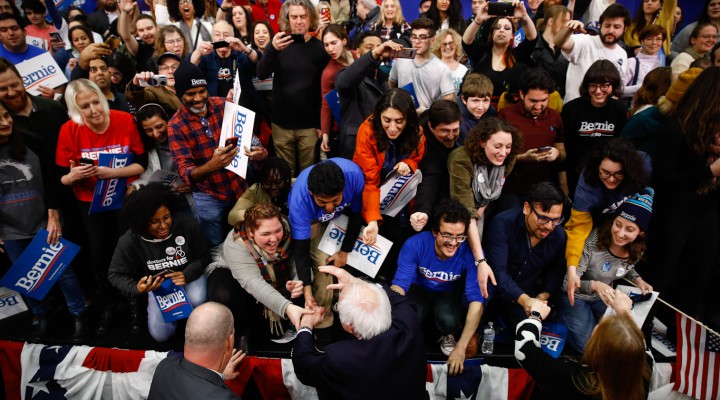 While the primary totals for Bernie Sanders and Pete Buttigieg were relatively close, their support came from radically different segments of the population.

But while the primary totals were relatively close, the top candidates’ support comes from radically different segments of the population, highlighting the deep fault lines in American society. Sanders was the runaway winner among New Hampshire’s working class, receiving 38 percent of the vote from those with household incomes less than $50,000. That is a 21-point lead over his nearest challenger. But his support fell to just 17 percent among those earning over $100,000. In contrast, Buttigieg doubled Sanders’ votes among the rich but fared poorly among the working class. It was a similar case with Klobuchar, who fared extremely well among the super-wealthy, but was in single digits with those earning under $50,000. Indeed, of all the measurable metrics polling tracked, she and Mayor Pete fared the worst when it came to class. Sanders also was the clear favorite among unionized households.

A tale of two futures

The American public is faced with a stark choice this year: embrace a more egalitarian social-democratic future with Sanders, or continue on a neoliberal path with Buttigieg (or Klobuchar). This is highlighted by the nature of their campaigns. Bernie took time out of campaigning to join the Chicago teachers’ strike and refuses to accept money from billionaires, arguing they are a corrosive force in U.S. politics. Buttigieg, on the other hand, has received payments from 40 billionaires and held a glitzy fundraiser in an exclusive Napa Valley wine cave, where guests were served $900 bottles of wine. Meanwhile, corporate media have lauded Klobuchar for unflinchingly opposing virtually every piece of progressive legislation, including Medicare for All, the Green New Deal and free public college tuition.

Here are some photos of the Buttigieg fundraiser in Napa — with the famous wine cave and the chandelier with 1,500 Swarovski crystals — that @BrianSlodysko wrote about.https://t.co/0sprQ3aDsy pic.twitter.com/3waO6jO93L

There is an increasingly close correlation between age and class in the United States, as more and more young people on the wrong side of the 2008 financial crisis are locked out of the American dream. Those who grew up in decades where college, healthcare and property were far cheaper have been more able to accrue wealth and avoid being saddled with huge debts like the younger generation. Total student loan debt currently stands at over $1.6 trillion, a number Sanders plans to cancel completely. Half of all young people believe the American dream is dead, and the majority of them are embracing socialism.

At the same time, the poor die young in America; a 2017 Congressional Research Service report found that rich Americans lived between 10-15 years longer than poor ones, meaning those who have survived to retirement age are disproportionately wealthy. Sanders won more voters under the age of 30 than all other candidates combined, yet his support craters to just 14 percent of the population aged over 65. Klobuchar, meanwhile, was the most popular candidate among the old but can count on only four percent of the young.

Sanders was also the overwhelming choice of non-white voters, 32 percent of whom voted for the Vermont senator – twice that of his nearest challenger, Joe Biden.

While the exit polls showed that the professional middle classes are highly fickle – the large majority of Klobuchar and Buttigieg supporters undecided or switching allegiances until the final few days – it appears the working class is ready for a political revolution. Freshman Congresswoman Alexandria Ocasio-Cortez called for just that to liquidate ICE and end mass incarceration. Ocasio-Cortez was speaking at a Sanders rally on the eve of the primary. “It’s going to take you to do it, mass movement politics to do it. That’s the theory of change, that’s what political revolution is all about,” she told the crowd.

Almost half of America is broke, and 58 percent of the country is living paycheck to paycheck, with savings of less than $1,000. 37 million Americans go to bed hungry and over half a million sleep on the streets on any given night, with many millions more in vehicles or relying on friends or family. In September, the U.S. Census Bureau reported that wealth inequality had risen to the highest levels they had ever recorded. Sanders has been a constant critic of economic inequality for decades and has emerged as the figurehead of a nationwide movement against it. Many forecasts project him as the favorite in all 50 states, but even if he does lose or is denied the nomination like in 2016, the conditions for his rise will not disappear, especially if Donald Trump wins again in November.