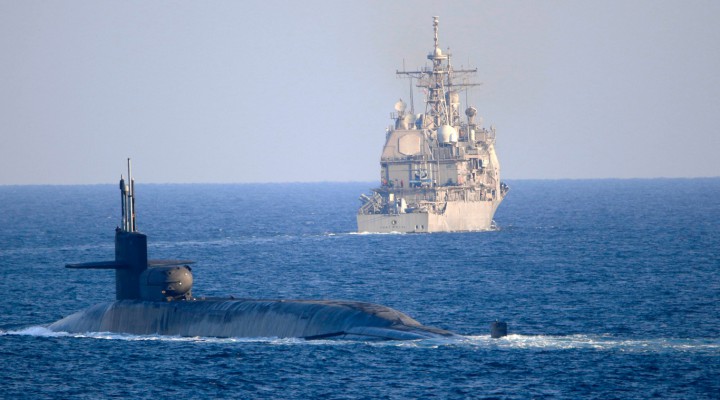 2020 began and ended with high-profile assassinations of Iranians, a buildup of the US military on Iran’s borders, and fears of another major war in the Middle East.

MPN- Amid increasing hostility towards Tehran, the United States is building up its military presence on Iran’s borders. In the past three weeks alone, the U.S. has flown in a squadron of fighter jets and extra B-52 bombers while deploying the U.S.S. Nimitz aircraft carrier (with its strike group) and a large submarine to the Persian Gulf. This comes on top of the 2,500 troops it sent to Saudi Arabia earlier in the year, the first build-up of forces in the country in 17 years. The nuclear powered Nimitz is home to nine squadrons of fighting aircraft and has also long been rumored to carry nuclear weapons.

The military insists that all the new measures are purely “in the name of deterrence.” However, the few journalists who have paid attention to the news appear skeptical. “That’s provocation!” wrote Rania Khalek. “You’re sending this shit thousands of miles away from your border to try to provoke Iran and then playing the victim.”

The move comes in the midst of worsening hostilities between the United States and Iran. Last week, the U.S. embassy in Baghdad (a massive citadel in the center of the city, almost as large as the Vatican) was hit by a rocket strike that the Trump administration blames on Iranian-sponsored groups. On Wednesday, Trump gave “some friendly health advice” to Iran, tweeting that “If one American is killed, I will hold Iran responsible. Think it over.”

The U.S. also recently upped its already extensive sanctions on the Islamic Republic, with Trump’s Special Representative for Iran and Venezuela, Elliott Abrams, claiming that “Thanks to the success of our sanctions, Iran is looking to come back to the negotiating table to get relief,” even as he imposed new ones.

The sanctions have indeed caused serious hardship on Iran, sending the prices of consumer goods soaring and the value of its currency, the rial, in the opposite direction. Like in Venezuela, oil production has slowed, as Tehran can find few buyers for its principal national export. The price of food has also become a serious issue for many. “The sanctions deliberately target ordinary Iranians, women, and children,” Seyed Mohammad Marandi, Professor of English Literature at the University of Tehran told MintPress earlier this year. “They are designed to kill hospital patients and to create poverty. They have had partial success.”

Iran was one of the earliest hit countries by the COVID-19 pandemic, and the U.S. government used it as an opportunity to try to overthrow the government, hindering its attempts to import medical equipment and personal protective equipment, a move condemned by human rights groups. Hawkish media and senior politicians alike appeared to be relishing the prospect of an insurrection in Tehran. “With aging rulers and a weak health system, could the coronavirus lead to a regime change in Iran?” asked former Speaker of the House of Representatives Newt Gingrich. Eventually, the World Health Organization stepped in directly, donating large quantities of supplies — one reason why the Trump administration decided to leave the organization.

2020 started with the U.S. assassination of Iranian statesman Qassem Soleimani as he was in Iraq attending a peace conference at the invitation of Iraqi Prime Minister Adil Abdul-Mahdi. Also present were representatives from Saudi Arabia and other Gulf monarchies with antagonistic relationships with Tehran. The move sparked uproar in Iraq, especially after Abdul-Mahdi revealed he had sought and received Trump’s blessing to invite Soleimani. The result was an enormous march of up to 2.5 million Iraqis parading through Baghdad insisting that the U.S. leave the country for good. Instead, the U.S. announced it was building three new military bases, all of them on the Iranian border.

Throughout 2020, the Trump administration has worked hard to build a united front against Iran amongst its client regimes in the region, with experts suggesting to MintPress that the Abraham Accords (the Israel-UAE-Bahrain agreement) were far more about war with Tehran than peace, as they were sold to the public. 2020 also ended with another high profile assassination; that of top Iranian nuclear scientist Mohsen Fakhrizadeh, a crime Iran suggested Israel or the United States must have committed.

The incoming Biden administration has signaled its intent to return to the nuclear deal that Trump and his team abandoned, with the 2020 Democratic National Platform categorically stating that,

Democrats will call off the Trump Administration’s race to war with Iran and prioritize nuclear diplomacy, de-escalation, and regional dialogue. Democrats believe the United States should not impose regime change on other countries and reject that as the goal of U.S. policy toward Iran.”

However, with the U.S. showing its ability to rapidly change political direction and break its own treaties, it is not clear whether Iran will see any American agreement as credible in the long term. Nevertheless, with the threat of a hot conflict increasing, any de-escalatory actions cannot come soon enough.

Dangerous Provocations Ahead for Iran

0 thoughts on “2020 Ends as It Began: With the Looming Threat of a US War With Iran”