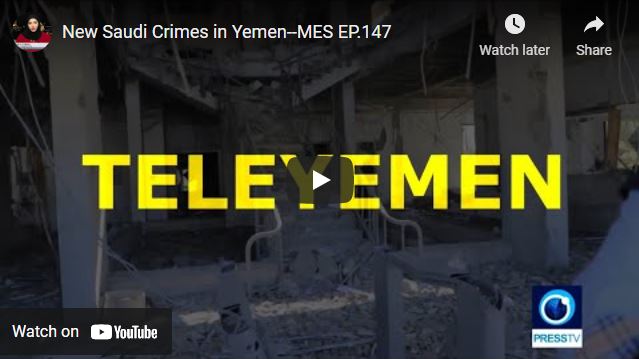 Last week, the spokesman for the Saudi-led coalition, Turki Al-Maliki, announced the intention to target civilian sites under the false pretext of being “used for military purposes.”

Riyadh hastened escalate its crimes against Yemen by launching a series of attacks on the Yemeni capital, targeting areas previously bombed with hundreds of raids. Saudi jets began pounding civil state institutions as part of the list of its new targets, calling on civilians to evacuate ministries and public institutions immediately.

As usual, the Yemeni communications sector was the first target of the new aggression, although it is protected under international law as civilian objects. The Ministry of Communications in Sana’a announced that the Public Communications Corporation had been subjected to a series of raids, two of which led to the complete destruction of the headquarters of the National Company for International Communications “TeleYemen”.

To discuss this issue with us from Sanaa is Engineer Nizar Al Mouaid, head of the IT department at Yemen’s Sabafon.

It was remarkable what was revealed by the Lebanese Al-Manar TV channel, quoting security sources following the investigations with one of the agents of the Israeli entity who were recently arrested in terms of exploiting the profession of journalism to distort the facts with lies and deception.

The main aim of that rogue journalist was to distort the image of Hezbollah and insinuate internal Lebanese divisions in order to undermine the resistance, while insistence on linking all the suffering of the Lebanese people to the alleged Iranian occupation of Lebanon.

Al-Manar TV had published a report that included what security sources had revealed about the details of the confessions of the journalist accused of collaborating with Israel, Muhammad Shuaib, who was arrested at the end of last month.

To discuss this issue with us from Beirut is Hamza Al Khansa, journalist at Al Akhbar Newspaper