HOME / WORLD / What next in the Yemen war? 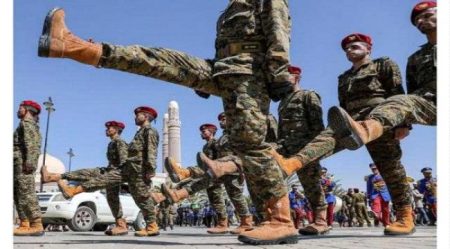 Houthis do a deal with the UAE, and revert to striking Saudi targets

On Thursday, Yemeni armed forces spokesperson Brig. Gen. Yahya Saree announced an ‘accurate’ drone strike on Abha airport in south-eastern Saudi Arabia. His Saudi counterpart, Col. Turki al-Maliki, acknowledged the attack but said the drone was downed by air defences. its shrapnel injured 12 people who were at the airport.

The resumption of drone attacks, perhaps to be followed by missile strikes, on strategic targets in the Saudi interior after focusing for about a month on striking the UAE suggests that a settlement has been reached between the Houthi Ansarullah and the UAE leadership. This hypothesis is reinforced by the fact that the forces of the UAE-funded and -armed Giants Brigades and the Southern Transitional Council (STC) have staged significant retreats in the past few days on the Ma’rib and Shabwa fronts.

Reliable Yemeni sources say the ‘calm’ on this front was the result of a deal reached through a phone call between UAE Foreign Minister Sheikh Abdullah bin Zayed and his Iranian counterpart Amir-Abdullahian two weeks ago and messages exchanged via mediators by the Emirati and Yemeni Houthi sides.

The UAE cannot tolerate missile and drone incursions into its airspace, whether from Yemen or Iraq (where a shadowy organisation calling itself the True Pledge Brigades said it sent five drones to target Abu Dhabi Abu Dhabi), even if it strengthens its air defences with advanced American or even Israeli systems to intercept them. Fear and uncertainty about possible further strikes would deal its investment and tourism economy a major hit — there have already been signs of a limited exodus of foreign companies from the emirates.

The resumed targeting of southern Saudi Arabia could mean the Ansarullah have put a freeze on attacking the UAE in return for the withdrawal of its proxies from the Ma’rib front, if only temporarily. This would have a detrimental effect on relations between the UAE and Saudi Arabia as partners in the Yemen war coalition for the past seven years. Riyadh was notably slow to issue a statement of solidarity with the UAE following the missile strike against it.

The Houthis consider Saudi Arabia to be their main enemy and the source of the greatest danger. In the three years after the UAE announced it was withdrawing from withdrawal from the war in 2019, it avoided confrontation with it and focused on the Saudi front: attacking strategic economic targets and infrastructure, and launching cross-border land incursions to ‘liberate’ parts of the southern districts of Jazan, Najran, and Asir), and confound the Saudi authorities and create a state of panic.

The term ‘liberate’ was used deliberately to remind the Saudi authorities and the Yemeni people that these are Yemeni territories that were leased to Saudi Arabia for 100 years under the 1934Traety of Ta’ifa.

The most prominent development in the course of the war over the past few weeks was the high casualty rate among civilians working in Saudi facilities. Twelve people were injured in the Abha airport attack — Indians, Pakistanis and two Saudis and air traffic was disrupted for several hours. In other words, the flames of this war, which raged solely in Yemen for several years, have begun to spread rapidly into Saudi territory and impact the Saudi public.

The Yemen war is likely to escalate in the coming weeks and months. It has become a central part of the Russian/Chinese/Iranian strategy to challenge US hegemony in the Middle East and the world. The US, for its part, hopes to use strategically located southern Yemen as part of its pushback against China’s Belt and Road Initiative and outreach to Africa.

It was at the US’s behest that the UAE, which currently has control over the Strait of Bab al-Mandeb, got its Yemeni proxies to prevent the Houthis from taking control of oil and gas-rich Ma’rib and Shabwa, and abandon its decision to withdraw from the Yemen war.

With tensions rising globally between the Chinese/Russian/Iranian and allied camp and the US-led camp, and with the Vienna nuclear talks reportedly close to collapse, Yemen is set to become a focal point of rivalries in the Middle East, and perhaps of any big-power war that breaks out.

In any case, the country has nothing left to lose. It is another matter entirely for its adversaries who started this war.

0 thoughts on “What next in the Yemen war?”