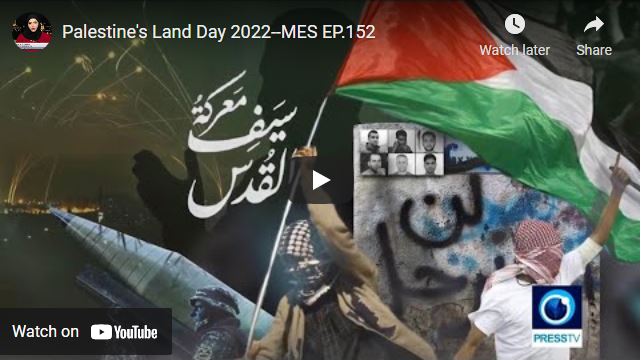 Passing through its center in the settlement of Bani Brak, we are shaded with the souls of the four martyrs: Muhammad Abu Al-Qaiaan, Khaled Igbariya, Ayman Igbariya, and Diaa Hamarsheh.  And finally focusing on Jenin, which has returned to the forefront of the Palestinian scene, after new confrontations punctuated by extensive armed clashes.

All this amid an Israeli failure to reach Palestinian resistance fighters who have been pursued by the Zionist “Shin Bet” for several months now.

Israeli special forces using civilian vehicle to storm into Jenin refugee camp is the epitome of Israel’s anticipation of the upcoming hock wave of the expected escalation especially during the holy month or Ramadan.

To discuss this visit with us from Beirut is Dr. Souheil Al Natour, Director the human development center.

Meanwhile, a ceasefire has gone in effect between the Saudi-led coalition of aggression and the Sanaa government, after both sides accepted a two-month truce, with all eyes on whether the UN-brokered ceasefire will hold.

UN special envoy Hans Grundberg said in a statement that all offensive ground, aerial and naval military operations should cease during this truce. Saudi Arabia’s intractable war on Yemen has killed hundreds of thousands directly or indirectly and displaced millions, triggering the world’s worst humanitarian crisis, according to the United Nations.

Previous ceasefires have been ineffective.  Lifting the blockade on airports and sea ports remains the real test, and any approach that does not take into account the humanitarian crisis as an urgent priority will remain meaningless and worthless.

The Yemenis, in this case, are adamant on confronting the siege, as a military action, with a military action in return, by bringing the siege-breaking operations back to the fore, as a natural and legitimate right, until conditions conducive to peace mature in a calm atmosphere away from any military or humanitarian pressures, and far from military and economic wars.

To discuss this issue with us from Sanaa is Mohamad Al Shami, political commentator.