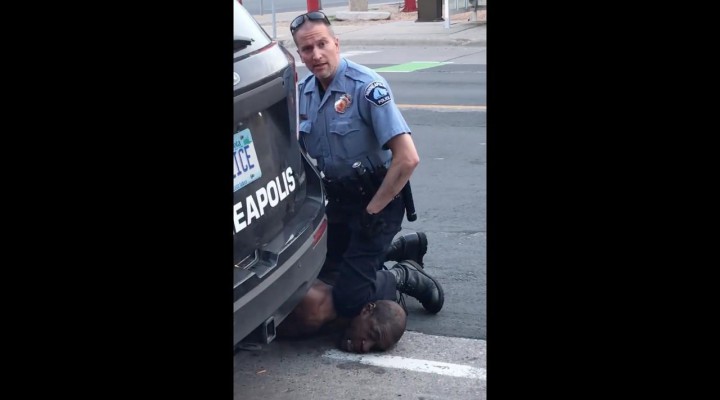 You’ve probably already seen the footage of a white police officer named Derek Chauvin cheerfully suffocating a black man named George Floyd to death with his knee while Floyd pleaded for his life. This went viral around the same time as another viral video where a white woman in Central Park called New York police on a black man who posed no threat to her while making sure to inform the police that he was black, and just weeks after video footage surfaced of a black man named Ahmaud Arbery being shot to death by a white former cop and his son while out for a jog.

So race is on everyone’s mind, and rightly so. And whether we’re honest with ourselves or we throw a bunch of verbiage at it to try and compartmentalize away from it, white people are all aware when we watch George Floyd being torturously murdered that there’s no way it could have been us on the business end of that knee. Not because of our impeccable manners or our sparkling personality, but because our skin is a certain color.

And whether we choose to directly acknowledge this reality or not, we’re going to experience discomfort on some level. And mainly what I want to say here is, that’s okay.

It can be tempting to try and distance ourselves from this discomfort by making it about individuals: that individual cop was a bad, bad man and I would never do such a thing, and I didn’t, so I have no accountability here. And of course it’s true that you were not personally directly responsible for George Floyd’s actual murder, but white people who urgently advance that truism are only ever doing so to avoid confronting the more uncomfortable reality that they live in and benefit from a society which guarantees that they will never be on the receiving end of such brutality.

White people have a lot of unprocessed feelings about racism, their role in it and the extent to which they’ve benefited from it, both in America and here in Australia, where the bright sun on my pale skin is a constant reminder to me that I am an alien on stolen land. Those unprocessed feelings will probably express themselves in angry vituperative comments on this essay by white people who are afraid of simply feeling their feelings and getting real with themselves, because this is uncomfortable, confrontational stuff.

“Identity politics!” is an objection I often get when I try to talk about the reality of racial power dynamics in our society, probably because I have a lot of readers who follow me because of my criticisms of the Democratic Party which often cynically exploits race and racism to advance political agendas.

But this isn’t identity politics; it’s not about politics at all. This is about healing, and being real with ourselves.

“Bah, white guilt!” is another common objection. “You just want us to feel guilty! How does white people feeling all guilty help fix racism??”

Obviously guilt in and of itself is not the objective here. Nobody’s claiming that the world’s racial wounds would be healed if white people just went around feeling guilty all the time; that’s a vapid strawman that is advanced by white people who don’t want to viscerally grapple with the reality of the advantages their whiteness brings them.

But also, why such a fearful, defensive response to the possibility of experiencing guilt? Why treat guilt like it’s made of molten lava? Guilt is just a feeling; it won’t hurt you. You just feel it, listen to what it has to say, and then once it’s been felt all the way through it subsides. There’s no need to fear it, and it’s not legitimate to reject ideas on the basis that they might cause you to experience it.

It’s not about guilt, it’s about consciousness and curiosity. Consciousness of the way racial power dynamics play out in our own lives, and curiosity about the experience of other races in our society.

White people are averse to emotionally processing the reality of their privilege for the same reason rich people aggressively insist they worked hard for every penny they have even though they know they received way more opportunities and advantages than the average person ever sees. Life is hard and abrasive for everyone, even for white people and even for rich people, so acknowledging you’ve received a head start in some way over other people can be one more thing in your mind telling you you’re deficient, in addition to your father’s voice and your first love rejecting you and all the other painful inadequacy stories you’ve got circling through your consciousness.

White privilege doesn’t mean white people don’t suffer or that some white people don’t have it harder overall than some black people. All it means is that having white skin is an advantage, and that all other factors being equal a white person will have an easier time in our society than a person of color. And that this is because our society has been shaped by white supremacy for many generations, leaving many remaining effects.

Healing can’t happen without consciousness. Healing our society’s racial wounds won’t happen as long as white people are compartmentalizing away from the reality that our lives have been easier than they would otherwise have been if we’d been born a different race, and that this is because our ancestors killed, enslaved, exploited and oppressed people who didn’t look like them for many generations before we got here. That while we didn’t personally cause this dynamic, we are interwoven into its tapestry and we have risen above others because of it.

And to be honest, if you really determine to get real with yourself and make your white privilege conscious, you will experience guilt at some point. It’s an inescapable part of the journey if you’re being really sincere and getting really curious about what life is like for people of different races in our society. And that’s okay. Guilt is not dangerous; you just feel through it and continue on your journey. It’s not the final destination in the journey, but it’s a river that you will cross along the way.

There are all sorts of conscious and unconscious ways that white people defensively protect a racist system, even when they don’t think of themselves as racist. You can witness these dynamics in a more overt form by simply scrolling through the comments on any of the videos linked here, full of white people arguing in various ways that this isn’t the atrocious thing that people are making it out to be. (Hint: if the only time you talk about racism is to yell at people that something isn’t racist, then you’re protecting racism.) They can happen in much subtler ways as well, throughout all aspects of our life, and it’s only by making them conscious and feeling the feelings that brings up until they are fully felt that these subconscious white supremacy-supporting mental habits can be noticed and uprooted.

My ancestors came to Australia as prisoners, and some almost certainly would have played some role in the genocide against the people who’d been living here for more than 65,000 years before them. And now I live in a society that is dominated by whiteness, and I’ve benefited from that. I’ve never had cause to fear for my life in the presence of a police officer, in fact I’ve never hesitated to call them if I’ve needed their help. I had an easy youth because my parents came from the race that has been favored by generations of white supremacist policies in Australia. Media I consumed growing up consistently featured people who were the same color as me, consistently feeding me through my formative years the message that I can accomplish anything I want in life. I’ve gotten jobs because I understand the subtleties of white culture enough to know how to speak and dress for different interviews, and because I had many white contacts (it’s not what you know, it’s who you know). There are people who pay attention to my words today who wouldn’t give them as much respect if they appeared next to a profile picture with dark skin. There are many other advantages I’ve had that I can’t even know about, since I’ve never lived a day in brown skin.

This is a reality I need to feel into and make conscious if I’m to play my part in our society’s healing of its racial woundedness. And yeah it can bring up uncomfortable emotions. Being white is weird, man. If we live in Australia or North America we’re acutely aware that we’re disconnected from our ancestral roots, but if we go to visit Europe that feels weird and not at all like home too. We walk through the land surrounded by the ghosts of its previous inhabitants, aware that they had a deep connection to it and that we do not. We’re always reaching for culture because we sense intuitively that that’s something people are meant to have, but everything we grasp fails to satisfy in any meaningful way. We’re aware on some level that we have it better than other races, but we also know that life has been cruel and abrasive to us too, and we don’t know how to solve all the problems which white supremacy has caused.

And if we’re honest with ourselves, it brings up a lot of feels. And it’s okay that it does. It’s good that it does. These feelings need to be felt. Really diving down the rabbit hole of racism and our role in it will move mountains inside you that you didn’t even know were there, and there will be some deep, deep emotions underneath them which will bring burning shame, and big tears. Those tears need to come out though. They’re what’s standing between you and true healing.

And when you have processed through that journey, you will no longer have in you the defensiveness about your own white privilege, and any parts of you which were unconsciously defending and protecting white supremacy in that way will have been purged from your system. And you will be in that respect a much more real and authentic human being, with a much more real and authentic relationship with the world. And the world will feel much more like home to you.

0 thoughts on “Meditations On Whiteness”