HOME / WORLD / Why is Israel stepping up attacks on Syria? 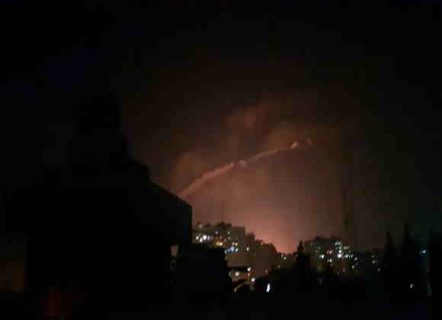 There has been a steady upping of the pace of unprovoked Israeli military attacks on Syria recently. As presumably intended, this escalation has gone largely unreported in the international media and unnoticed by an outside world preoccupied with the coronavirus pandemic.

On Friday, Israeli warplanes launched a missile strike on a military base near the city of Hama, causing extensive casualties. The previous night, Israeli helicopters overflying the occupied Golan Heights targeted sites used by pro-government Iranian-backed paramilitaries. This followed similar air raids on Syrian army positions south of Damascus and in Palmyra and attempted drone assassination of four Hezbollah field commanders on the Syria-Lebanon border.

The timing of this escalation is ominous and is aimed at achieving several overlapping objectives.
At the strategic level, it is part of an ongoing deliberate policy of provocation. It seeks to goad Syria, Iran and Hezbollah, individually or collectively, into retaliating by shelling the Israeli heartlands, thereby furnishing Benjamin Netanyahu’s Israeli government and Donald Trump’s US administration with the pretext they have long sought to trigger a regional war against Iran and its allies.

It has the added purpose of serving Netanyahu’s domestic agenda: to bolster his public standing as a wartime leader, and divert attention from the corruption scandal that threatens to get him indicted and the political crisis that is afflicting Israel and may force it into its fourth election in just over a year.

The attacks are also aimed at putting additional pressure on Iran and Hezbollah in Syria as they grapple with crises at home: Iran as it struggles to cope with the coronavirus crisis, and Hezbollah amid mounting political tension in Lebanon that increasingly threatens to spark renewed civil conflict – with clear American incitement.

At the same time, Israel and the US are trying to disrupt the Syrian government’s plans to retake the north-western province of Idlib and the oil and the gas-producing region east of the Euphrates. They want to continue to project an image of instability in Syria to hinder its efforts to proceed, after years of conflict, to a period of reconstruction and repatriation of refugees.

But can this scheme succeed?

Syria and its Iranian and Lebanese allies will surely avoid being drawn into the trap of entering into an all-out confrontation with Israel and the US, at a time when their ‘axis of resistance’ is under pressure not just in Syria but also Iraq, Lebanon and Yemen.

In tactical terms too, attacks like these have failed to achieve Israeli and US objectives. Israel has carried out more than 300 airstrikes against Syria in recent years, most of them supposedly targeting Iranian or Iranian-backed forces, arms depots, or convoys conveying Iranian missiles to Hezbollah via Damascus airport or overland. But Iran’s military presence in Syria was not affected. On the contrary, rather than being reduced, it was reinforced. Nor did they diminish Hezbollah’s arsenal: it has been replenished with increasingly sophisticated missiles and drones.

Syria is being subjected to these increased Israeli attacks because it succeeded in overcoming the conspiracy aimed at destroying it over the course of the past nine years. Its army held together and, making enormous sacrifices, proceeded to recover more than 80% of the country’s national territory.
Syria’s recovery, in turn, heralds broader changes in regional dynamics. In former times, ancient and modern, the Arab World was dominated – and its enemies were resisted – by a triumvirate consisting of Syria, Iraq and Egypt. We could be reverting to that norm. As oil prices collapse, the era of regional domination by the oil-producing states of the Gulf looks to be drawing to a close. It is this prospect, above all else, that troubles Israel’s leaders.

As for Syria, it has withstood enormous adversity in recent years and remained standing. A few more airstrikes probably won’t make much difference.

0 thoughts on “Why is Israel stepping up attacks on Syria?”