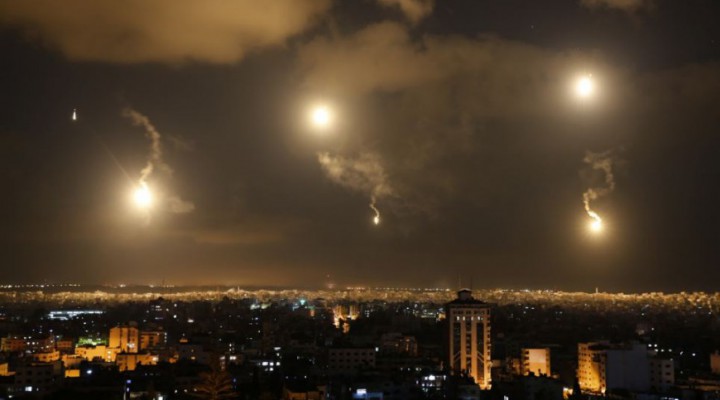 During the early hours of Thursday morning (6th February 2020) Israel began a bombing campaign in Damascus and to the south in Daraa which lasted 45 minutes. The first huge explosion woke me up in West Damascus which was the first area to be targeted.

1. 45 minutes of air confrontation between Syrian Air Defence and Israeli enemy missiles in several areas east, west & southwest of Damascus and the airspace of the three governorates triangle known as the “Triangle of Death” that is administratively overlapping between Daraa, Damascus & Quneitra.

2.  The first wave at 1:15 am, Syrian Air Defence dealt with most of the hostile targets in the airspace east of the capital – Damascus, eastern Ghouta, and its western outskirts and adjacent suburbs.

3.  Second wave at 1:25 concentrated in the southwestern countryside of Damascus and Eastern Ghouta.  SyAD dealt with a large number of hostile targets in the airspace of Qatana farms, Khan al Sheeh,  #Derkhubiyyeh & the mountains surrounding the area of Kisweh – Occupied Golan.

4.  3rd wave at 1:50 am was accompanied by a Zionist reconnaissance flight in the airspace of the disengagement line opposite the central and southern countryside of Quneitra.

5.  Syrian Air Defence dealt with enemy missiles that were heading to the Tal Al Hara axis in the western Daraa countryside, and the airspace of the city of Izraa.

Taken from the facebook page of Syrian journalist, Jafar Mayya.

Damascus, SANA-The Army and Armed Forces General Command said that at 02:00 am on Thursday 6-2-2020, and in an blatant synchronicity with the Israeli air aggression and even under its cover, a Turkish military convoy that includes a number of vehicles and armored vehicles passed from Oglinar area into Syria.

The statement added that the Turkish military convoy deployed to the line between the towns of Binnish, Ma’aret Masrin and Taftanaz with the aim of protecting terrorists, on top “Jabhat al-Nusra”, and to impede the advance of the Syrian Arab Army and to prevent it from completing the elimination of systematic terrorism which besieges civilians in Idleb province and take them and hostages and human shields.

“The Army and Armed Forces General Command continues its national tasks in defending the security of the homeland and the citizens, and it affirms at the same time the readiness of the Syrian Arab Army and its determination to confront the aggression regardless of its different names and forms,” the statement read.

The statement indicated that the” simultaneous Israeli and Turkish attempts and whoever supports armed Takfiri terrorism will not succeed in preventing our courageous soldiers from pursuing their field tasks till clearing all the Syrian territories from the armed terrorist organizations.”