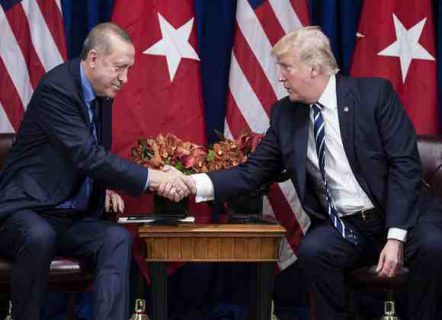 US President Donald Trump is often derided as a fool and his foreign policy as a failure, especially in the Middle East. This description is unquestionably apt. But his surprise decision to pull the US’ 2,000-strong military force out of northern Syria, after deeming its mission ‘futile’, and to abandon his Kurdish allies there, is a smart act of strategic reappraisal. It is an admission of defeat and an attempt to cut Washington’s losses after it spent tens of billions of dollars engaging in the war in Syria.

Turkey has now begun a military invasion of the area in the wake of the US announcement, aimed at crushing the mainly Kurdish Syrian Democratic Forces (SDF) who control it, and whom it deems to be terrorists. Its objectives include the establishment of a 30 by 500 km buffer zone inside the Syrian border and the resettling of some of the 3.5 million Syrian refugees currently in Turkey there.
This is a risky gamble, and the outcome may turn out to be the opposite of what President Recep Tayyip Erdogan intends.

Trump has presented the Turkish president with a poisoned chalice. By suddenly deciding to withdraw from northern Syria and give him free rein there, he has lured him into a trap that may end up resembling the one into which the Saudis were drawn in Yemen – or the US in Iraq and Afghanistan. Perhaps this is Trump’s underhand way of exacting revenge for Erdogan’s unforgivable decision to favour Russian S-400 air defence missiles over American-made Patriots.

From day one of its offensive, Turkey and its forces will face a host of dangers and challenges.

For one thing, in the SDF they will be confronting a well-armed and trained and highly motivated and battle-hardened force. The US has lavished sophisticated military equipment and expert training on the Kurdish militia over the years. It gained invaluable combat experience in its ferocious and bloody US-backed war on the Islamic State group (Daesh), which resulted in the destruction of its Caliphate state, its expulsion from its stronghold in Raqqa, and the capture of thousands of its fighters and supporters.
Secondly, the offensive will be costly for Turkey in monetary terms. Apart from the direct costs, it will then have to administer and provide services for hundreds of thousands, perhaps millions, of civilians in the areas that come under its control, whether residents of the area or refugees relocated there. When Turkey and the US first agreed on the creation of a safe zone, it was assumed the two sides would share the financial burden of running it. But the US pull-out places all that burden on Turkey’s shoulders, at a time when the country is in economic crisis. Things will get even worse if the US makes good on its threats to punish Turkey economically if it goes too far in its assault.

The Turkish move also raises the prospect of the Syrian army intervening, sooner or later, and clashing with Turkish forces. The Syrian leadership has repeatedly warned it will not tolerate any new violation of its territory and sovereignty, and that it will fight back against any invasion.

Even if the offensive succeeds and the Turkish authorities assume control of the entire targeted area, they will be taking possession of a ticking time bomb in the form of the thousands of Daesh fighters held in Kurdish prisons. How will it deal with them? Will it subject them to due legal process, or just keep them detained, either in northern Syria or in Turkey itself? And what will it do about the foreign fighters, especially the Europeans, whose home countries will not take them back?

The inaction so far from Syria and its Russian ally regarding the Turkish intervention raises many questions. Does it amount to tacit approval, or reflect an understanding reached at the recent three-way Russian-Turkish-Iranian summit in Ankara? Or is it just a matter of waiting-and-seeing, given how Erdogan has repeatedly rowed back at the last moment from previous threats to invade northern Syria?
One theory doing the rounds in Turkey is that a trade-off was agreed. Damascus and Moscow turn a blind eye to the Turkish incursion, and in return, Ankara looks the other way when Syrian and Russian forces launch their much-anticipated offensive to retake Idlib. The militant groups that currently control that province would then be relocated to the Turkish-controlled northeast. (Syrian sources, incidentally, dismiss this idea as fantasy, insisting that the army is intent on liberating every remaining inch of Syria’s territory).

Trump’s troop withdrawal from northern Syria is not only a stab in the back to the US’ Syrian Kurdish allies – whose leaders really ought to have learned some lessons from history about Western back-stabbing of their people. It could also be a prelude to a broader US pullback from the wider region – including Iraq and its numerous bases in the Gulf – in line with Trump’s election promises to disengage from the Middle East’s expensive and useless wars.

In recent days, Trump has practised relocating the command centre for US forces in the region from Qatar to the American mainland. He has ordered aircraft carriers and warships out of the Gulf and into the Indian Ocean. He won’t take responsibility for the Syrian Kurds, saying the US already gave them plenty of money and arms to fight Daesh under American leadership. He seems to have opted to quit the Middle East and leave it to its own devices and futile wars, and to sort out its problems by itself.
But Trump’s unceremonious abandonment of the Syrian Kurds is ominous for his other allies in the region, especially in Saudi Arabia and throughout the Gulf. When will it be their turn to be stabbed in the back, or straight in the chest? lt is only a matter of timing and priorities.

0 thoughts on “Trump’s ‘gift’ to Erodgan”