HOME / WORLD / From “Bring Our Troops Home” to “Sykes-Picot on Acid”: Neocons Get Their Way on Trump’s Syria Policy 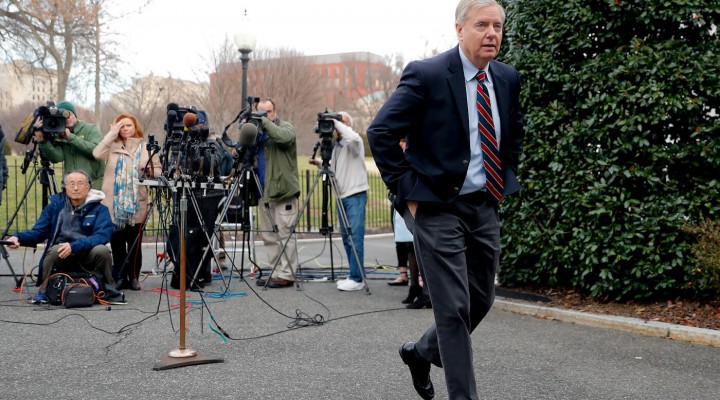 Everything seems to suggest that this new condition upon which troop withdrawal now hinges was intentionally set up to fail in order to ensure the enduring presence of a U.S. military occupation in a sizable portion of Syria, while saving face for the flip-flopping Trump.

Since it was announced a few weeks ago, President Donald Trump’s plan to withdraw U.S. troops from Syria has now — unsurprisingly – morphed from an “America First” policy move into yet another “Israel First” and neoconservative-supported initiative likely to continue the U.S.’ illegal occupation Syrian territory for the foreseeable future.

Indeed, according to recent statements from top administration officials, the U.S. troop withdrawal from Syria has now become “conditional” on upcoming negotiations with the Turkish government and is being “coordinated” with the State of Israel. Even more concerning is the fact that leaked details of the still-classified plan have shown that the U.S. plans to partition the portion of Syria it is currently occupying into “spheres of influence,” in a move that is reminiscent of the Sykes-Picot plan and constitutes a last-ditch effort to achieve the long-standing Israeli/U.S. geopolitical goal to divide and weaken Syria.

The relatively quick reversal on Trump’s push to withdraw U.S. troops that are illegally occupying Syrian territory is unsurprising given the immediate and extremely negative reaction it received from politicians from both parties as well as the mainstream press.

It soon became clear that Trump – even if his intention was to remove U.S. troops – was unwilling to strongly resist pressure from both within and outside of his administration, as evidenced by the shift in rhetoric regarding the troop withdrawal after his lunch with Senator Lindsey Graham (R-SC). Graham stated, after lunching with the president, that the troop pullout had been slowed and that he felt “a lot better” about the troop withdrawal plan that he had vigorously opposed since Trump announced it a week prior via Twitter. Following Trump’s willingness to weaken his call to withdraw troops following his luncheon with Senator Graham, top administration officials have continued to signal that the troop withdrawal will not be the immediate move originally promised and have hinted that the withdrawal may not even happen at all. As a senior State Department official told the Wall Street Journal just last Friday, the government has “no timeline for our military forces to withdraw from Syria.”

The Journal also notably revealed on Friday that James Jeffrey, the State Department’s “representative for Syria engagement,” had developed a plan to partition the area of Syria currently occupied by U.S. forces and its military proxies – approximately 30 percent of the country’s entire territory – into spheres of influence in order to prevent the Syrian government from retaking the region.

Notably, Jeffrey – who is also a member of the Council on Foreign Relations – was one of the masterminds behind the State Department’s plan, released last September, that would maintain U.S. troops in Syria indefinitely and sought to remove Syrian President Bashar al-Assad from power via a “major diplomatic initiative.”

Jeffrey’s new plan, in contrast to the regime-change policy he helped to create and promote last September, is somewhat altered but no less troubling. According to the Journal:

Mr. Jeffrey and his State Department team have created a color-coded map of northeastern Syria in an attempt to negotiate a power-sharing plan that could avert a costly Turkish-Kurdish fight in the area.”

The report goes on to quote a former U.S. official who described the classified and still undisclosed map as “Sykes-Picot on acid,” a reference to the secret, post-World War I agreement between Britain and France that sought to divide the Middle East into spheres of Western imperial influence.

The fact that Jeffrey’s current plan evoked the memory of Sykes-Picot from U.S. officials is troubling given that the Sykes-Picot agreement was used, and is arguably still being used, to impose long-lasting Western imperial control over the Middle East by laying the groundwork for many of the current conflicts that still rock the region a century later. It also suggests that Jeffrey’s plan to partition northeastern Syria is aimed at many of the same goals but on a smaller scale — which is to say, aimed at keeping the state of Syria weak and conflict-ridden well into the future by carving up the country’s most resource-rich area into regions of influence held by rival factions, including the Kurds and the Turks.

Not a reversal, just some impossible contingencies

The plan to partition northeastern Syria seems ripe for conflict, which is notable given recent comments by National Security Adviser John Bolton. On Sunday, Bolton stated that U.S. forces would not leave Syria until Turkey guarantees the safety of the U.S.-backed Kurdish militias that Turkey considers to be terrorist organizations linked to the Kurdistan Workers’ Party, or PKK. He also confirmed that there is no timetable for U.S. troop withdrawal from Syria, stating that such a “timetable flows from the policy decisions that we need to implement.”

This new condition stipulated by Bolton – that Turkey not attack U.S.-backed Kurdish majority militias like the Syrian Democratic Forces (SDF) – seems destined to fail, given that the main motivator behind Trump’s troop withdrawal announcement appears to have been an ultimatum from Turkish President Recep Tayyip Erdoğan that the U.S. must choose between its relationship with Turkey or the SDF. This had followed the U.S.’ announcement that the U.S. military would be setting up observation posts on the Turkish-Syrian border in order to assuage Turkish concerns about the SDF. Instead, however, it provoked an angry response from Turkey.

The loosely-knit coalition of rebel groups, including Kurdish factions, known as the Syrian Democratic Forces (SDF), are armed, trained and backed by the U.S. Photo | SDF

Similarly, Bolton’s recent comments, pushing for a guarantee that Turkey will let the SDF be, also provoked an angry response from the Turkish government and, given recent precedent, it seems highly unlikely that Turkey will renege on its push to oust the SDF from areas of Syria near Turkey — especially in light of Erdogan’s recent, and still very relevant, ultimatum. The context here seems to suggest that this new condition upon which troop withdrawal now hinges was intentionally set up to fail in order to ensure the enduring presence of a U.S. military occupation in a sizable portion of Syria, while also attempting to somewhat mitigate Trump’s embarrassment over the glaring flip-flop.

By setting a condition that Turkey is unlikely to meet, the Trump White House is able to keep U.S. troops in Syria while outsourcing responsibility for that decision to the Turkish government. It also paves the way for the U.S. to attempt to defuse the volatile situation between the SDF and Turkey by pushing through its “Sykes-Picot on acid” partition plan, likely to include attractive territorial giveaways to Turkey that appeal directly to its expansionist ambitions, which have long held parts of northern Syria in its crosshairs.

However, for this same reason, it is unlikely that Turkey will stay content with its sphere of influence for long, but will soon seek to again curb the presence of Kurdish militias in Syria and to acquire more Syrian territory, keeping the area conflict-ridden and easily manipulated by foreign powers for the foreseeable future.

U.S. plan back on tracks, if it ever left them

While the “new” partition plan may seem novel, it has long been the endgame for both the United States and Israel in the Syrian conflict. Indeed, the partition of Syria has been repeatedly sold to the public as the “only” solution to Syria’s ongoing “sectarian” conflict, even though this sectarianism was engineered and stoked by foreign powers. Indeed, WikiLeaks revealed that the CIA was involved in instigating anti-Assad and “sectarian” demonstrations as early as March 2011 and declassified CIA documents have shown the plan to engineer sectarianism in order to weaken the Syrian state dates back to at least the 1980s.

Thus, what we are seeing now is a last-ditch effort by the U.S. to secure its long-desired partition of Syria — and its continued military occupation of the area of the country that contains most of its oil, gas, fresh water and agricultural resources — in order to weaken the Syrian government and maintain U.S. hegemony in the Middle East.

0 thoughts on “From “Bring Our Troops Home” to “Sykes-Picot on Acid”: Neocons Get Their Way on Trump’s Syria Policy”