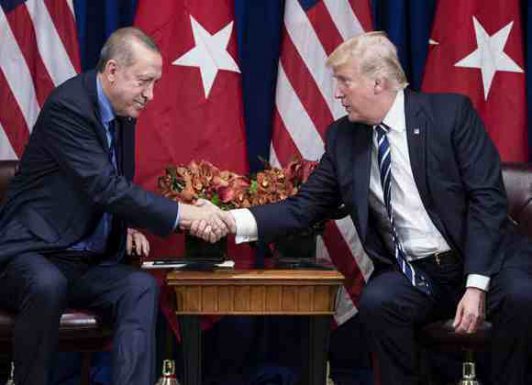 By taking delivery of the first and second consignments of advanced S-400 air defense systems from Russia, the Turkish leadership may be severing its last remaining bonds to its 70-year-old strategic alliance with the United States of America — in favor of the foe this alliance was created to confront.

Turkish President Recep Tayyip Erdogan has made up his mind. He refused to succumb to American pressure and threats, not to mention inducements, and went ahead with his decision to acquire these missiles, thus turning his back on Nato’s dominant power.

The US has reacted by freezing Turkey out of its F-35 stealth fighter programmer, and is expected to impose further military and other sanctions on the country. Its declared justification is that the S-400s pose a threat to the F-35s, so Turkey cannot be allowed to possess both. But this is unconvincing. Fellow Nato-member Greece has also deployed Russian-made surface-to-air missile systems but never faced the same kind of pressure from the US.

It seems that the US administration has a problem trusting any Muslim country, however pliant it may be and subservient to its dictates. This applies not only to adversaries like Iran and Syria, but also nominal partners such as Iraq, longstanding allies Turkey and Egypt, and even its clients in Saudi Arabia and other Gulf states who unquestioningly do its bidding. It trusts only one country in the region, Israel, and its opposition to Turkey’s acquisition of these weapons is rooted in Israel’s security considerations: namely its desire to maintain its regional military supremacy. Israel was the first country after the US itself to acquire F-35s and deploy the planes in ‘combat’ (to bomb Syria).

The US and Israel are particularly worried that the deal signed with Russia provides not only for the supply of these missile systems but also their co-production in Turkey. The transfer of secret military technology this entails is a red line for the two countries.

The US administration offered to supply Turkey with its Patriot air defense missiles as an alternative. But the Patriot’s much-hyped reputation as an invincible interceptor has taken a beating at the hands of the Yemeni army and Ansarallah (Houthi) resistance. The same can be said about Israel’s Iron Dome and other missile defense systems, which have Israeli names but are mostly based on American technology. They have been repeatedly foiled by the unsophisticated (but steadily improving) home-made projectiles fired by resistance groups in the Gaza Strip.

The Patriot is also extremely expensive. Priced at some $6 million a piece, these missiles have been used to down rockets fired by Yemeni, Palestinian and Lebanese resistance groups that cost a couple of thousand dollars at most.

By taking delivery of the Russian missiles, the Turkish government seeks to affirm its national sovereignty and freedom to make its own decisions, demonstrate its refusal to be dependent on the US, and signal that it puts the interests of its national security above all other considerations.

But it could be made to pay a high price for distancing itself from and refusing to submit to the US, and moving closer to Russia, China and Iran. The risks range from retaliatory American economic sanctions – those imposed two years ago had a devastating effect on its currency and economy – to US funding and arming of Kurdish separatist groups.

Ankara will have to radically rethink its priorities and policies if it is to face up to these dangers, especially with regard to its immediate neighbours Syria and Iraq.

Might this prompt Erdogan to revert to the policy of ‘zero problems’ with neighbouring states which underpinned the economic and political renaissance Turkey experienced after his AK Party came to power in 2002?

Turkey has no real alternative to taking that path. With its ties to the US and the West under such strain, it must turn northwards and eastwards — towards its Arab and Russian neighbours, its Chinese partners and the wider Islamic world – if it is to avoid being singled out by the US as a target of economic and security wars of attrition.