HOME / WORLD / Betrayal of the Kurds – Trump joins his predecessors, but Why? 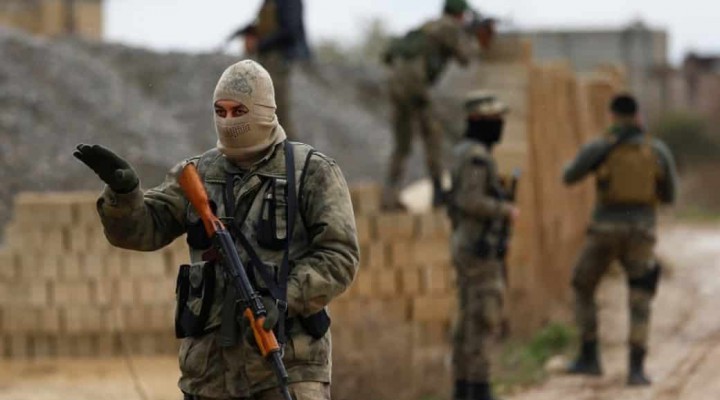 America has done little but betray the Kurdish people, over and over. You see, you can only betray someone who trusts you and the Kurds, to a fault, are trusting people who love Americans. The problem is, the Americans the Kurds love don’t run America and, quite frankly, maybe just don’t exist anymore.

We begin with this quote from the Daily Beast, a media outlet once controlled by powerful Israeli/American Congresswoman Jane Harman, whose career plummeted when she was caught aiding superspy Jonathan Pollard.

That’s another story, the public story is that Pollard was aiding Israel with intelligence on Palestinians. The truth? Pollard destroyed the CIA by accessing lists of deep cover operatives which were sold to the highest bidder, and that would be the Soviet Union. Over 1000 were “liquidated.”

I only bring this up as we will, as we go on here, enter a differentiated reality. I served in the KRG with the UN mission at the height of the American occupation. As a diplomat and American who was critical of US policy, I built strong relationships, strong friendships and angered more than a few when I failed to buckle under to US pressure from Baghdad.

As with any issue, the first thing we address is should we care – or why a reader should care, why does it matter now, even if one lives 3000 or 7000 miles away? Always implied in an answer are issues of right and wrong, good and bad; there is a place for morality and justice, even today. Here is our Daily Beast quote, as promised:

“It’s clear that Donald Trump feels no remorse over his decision to abandon the U.S. military’s Kurdish allies in Syria to make way for an attack from Turkey. The White House announced late Sunday that U.S. troops will withdraw from northern Syria and leave the Kurds, who have carried out the majority of the fighting against ISIS and led the fight to take down the terror group’s “caliphate,” to face an invasion from Turkey.

Writing Monday morning, Trump more or less said “tough luck” to the allies he’s abandoned, saying the Kurds “will now have to figure the situation out.” He wrote:

“The Kurds fought with us but were paid massive amounts of money and equipment to do so. They have been fighting Turkey for decades. I held off this fight for almost 3 years, but it is time for us to get out of these ridiculous Endless Wars, many of them tribal, and bring our soldiers home.

WE WILL FIGHT WHERE IT IS TO OUR BENEFIT, AND ONLY FIGHT TO WIN.” The president added: ‘We are 7000 miles away and will crush ISIS again if they come anywhere near us!’”

The Kurds exist in Turkey, Iraq, Syria and Iran in significant numbers. The land they occupy changes, as they have both been ethnically cleansed and acted as “ethnic cleansers” when backed by the US.

Thus, Syrians have always had a Kurdish population north of Aleppo and in some Eastern regions, but generally deny an historical Kurdish region in Hasakah or particularly in Deir Ezzor, where Kurds removed Arab populations and have acted as a hostile occupying force, as demonstrated by widespread uprisings in some areas against Kurdish rule.

Inside Iraq, Kurds had held regions north of Baghdad until removed by Saddam Hussein in the 1970s, moved north as their presence threatened control of the massive Kirkuk oil reserves.

We are also going to supply some background material now as well, as context is everything and as Trump so often rightfully acknowledges, what the public is told is 100% fake.

Run the clock up to 2014 and the lightning ISIS takeover of much of Iraq. I was there at the time, representing a defense group out of the UAE, Britain, France and the US, trying to reorganize Iraq’s military. I won’t go there but saying it was a “fools’ mission” is understatement.

You see, the CIA had preceded me with bushels of Saudi cash and a story. They were going to put the minority Sunni population of Iraq back into preeminence, but in order to do that, a fake terror group had to be created, one tightly controlled, which would start a civil war that would destroy the powerful Shiite militias backed by Iran and foster an American return.

The CIA’s goal was to rebuild infrastructure and a political climate that would allow the US to manipulate a divided Iraq into hosting an American invasion of Iran from its soil, and ISIS was going to make that possible.

Thus, Americans in Iraq during the war on ISIS primarily bombed Iraqi militias fighting ISIS, while supplying ISIS and using American resources to keep the war going as long as possible.

General Soleimani of Iran had other ideas and had not been considered. In early October, the US again tried to assassinate Soleimani — the 4th or was it the 5th time? We have other stories, Syria is clear, al-Qaeda and ISIS allied with Israel, and Saudi Arabia with the US, both fighting them and aiding them.

What the public never understands is that it is the war that matters, not who is fighting or even who is winning or losing, the long game is always built on conflict. Only during conflict can oil and gas prices be openly manipulated making billions, can huge arms contracts be given away and more billions stolen and governments openly corrupted, while the public is lulled into permanent hopelessness under newly empowered police state apparatus in the former Western democracies.

Do we talk “Turkey,” the plot to overthrow Erdogan? He says it was the CIA, yet he still sits at the table with NATO and regularly visits the US.

Thus, we have a Turkish army poised to enter Syria to slaughter the Kurds who sort of fought ISIS, but mostly stole Arab land and channeled Syrian and Iraqi oil, several billion barrels, through Turkey and into world markets enriching whom?

We are then reminded of the Kurdish war on ISIS that allowed ISIS oil convoys to drive right through the Kurdish capital of Erbil for years, right though “battle lines” in a war that was 99% “sitzkrieg” and 1% “blitzkrieg.”

Yet like the Palestinians, the Kurds wish for their own state. Instead, they were pushed to take someone else’s land, empowered by the CIA’s plots against Turkey, Iraq and Syria, as a tool to be used and discarded. They fell into a trap any idiot should have seen, one they had been in before, over and over.

Where can they turn? Will Damascus and Moscow save them?

Some Kurdish units fought alongside Syrian forces to liberate Aleppo. I have spoken with Syrian leaders; and Syria is willing to support a Kurdish autonomous zone, predicated on US withdrawal and a reestablishment of Arab communities that were crushed by an American/Kurdish incursion that had little or nothing to do with fighting ISIS.

Reestablishing trust is a problem for the Kurds and, to an extent, why they face obliteration now. Yet there is an inherent decency to the Kurdish people, and if they may be faulted, it is for trusting the wrong people or for grasping at opportunities “too good to be true” – which of course did turn out to be exactly that, “too good to be true.”

We then look at Turkey and ask ourselves, is a potential Syrian sovereignty predicated on real security issues? That answer would generally be “no,” a quite emphatic “no.”

Turkey hardly has “clean hands” when it comes to Syria. In Idlib, Turkey has worked hand in hand with ISIS and al Qaeda for years, has violated every agreement, and only complies when forced with economic sanctions and military defeat.

Turkey continues to consider Hatay Turkish land, though that region is ethnically Syrian and has been since time immemorial. Across the border into Idlib, the Turkish occupation, hand in hand with Saudi-paid al-Qaeda – yes, the same al-Qaeda at one time accused of staging 9/11 – is an undeniable reality.

Yet, with the decline of American power, having lost a “playground fight” threat-match with Iran, while Saudi Arabia begins to crumble from both within and without, it is clear that Russia holds all the cards.

The question isn’t whether the Kurds will be punished, but how much punishment will be allowed, as the Turkish incursion spits in the face of Russian guarantees of Syrian sovereignty.

Behind this all is the survival of Syria. Idlib province, occupied by Turkey, sits on large oil and gas reserves coveted by Turkey and their Israeli partners.

A further threat to Turkey is the proposed oil pipeline from Iran to the Mediterranean, which would cut Turkey’s revenue from Iraq’s Kirkuk oil fields. One might also add that Turkey allowed the theft of Iraqi oil, sold through Turkey, largely to Exxon and BP, for many years, under both US and ISIS occupation.

A further reminder is Turkey’s role in the looting of Northern Syria. Entire factories were removed, banks looted, everything that could be moved from the most industrialized regions of Syria were trucked into Turkey and divided up by key families loyal to Erdogan.

The Ministry of Justice in Damascus has a list, a long list, endless evidence and is unlikely to “forgive and forget” the theft of $100 billion in assets by Turkey. I have reviewed these records personally.

Iraq has a similar list, and the Baghdad government cites Kurdish complicity in the looting of Iraq by ISIS. All roads to Turkey and the world’s markets go through 100% Kurdish-controlled regions, those thousands of oil trucks for instance, escorted out of Iraq by Kurds, not ISIS. Not everyone in the world is ignorant of geography.

Yet, when the Kurds face wrath, particularly under the hand least offended, that of Turkey, should they not be defended, particularly by America?

Behind this is a longer game, one of preventing the inevitability of an Islamic “super-state” capable of stabilizing the region and setting up a broad trade zone between Europe and China.

This, of course, is not just the southern route of the “Silk Road”, but something more. Playing the “great game” of divide and conquer, pitting Sunni and Shiite against one another, supporting the terrorist MEK or toying with the Kurds are only ways of putting off what is an inevitability.

It isn’t an Islamic nuclear superpower that is feared, but rather the most dangerous threat the “elites” and “oligarchs” face of all — of peace “breaking out.”

NEO: Betrayal of the Kurds – Trump joins his predecessors, but Why?

0 thoughts on “Betrayal of the Kurds – Trump joins his predecessors, but Why?”