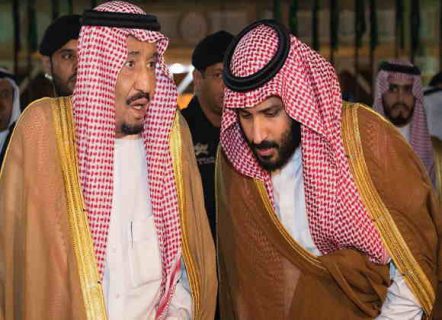 The Saudi government’s decision to raise the VAT rate from 5% to 15% and scrap the monthly 1,000 riyals ($225) cost of the living allowance paid to public sector employees is only a start. Further painful austerity measures are likely to follow in order to plug the kingdom’s budget deficit that currently stands at $112 billion and is set to grow. Finance Minister Muhammad al-Jadaan alluded to this last week in an unusually candid interview with the al-Arabiya TV channel.

The mushrooming deficit is due above all to the dramatic decline in oil revenues. Global oil prices have crashed as a result of falling demand caused by the coronavirus pandemic, and the kingdom has cut its output by some 4 million barrels to 7 million per day in line with the ‘OPEC+’ accord aimed at curbing the market collapse. As a result, the Saudi economy is forecast by the IMF to contract by 2.3% this year.
In addition to losing around two-thirds of its budgeted oil income, the kingdom’s non-oil revenues have also fallen sharply. Religious tourism, which earns the Saudi treasury some $16 billion annually (from 17 million pilgrims making Umra and 2.6 million performing hajj) has ground to a halt.

This leaves the Saudi government with an unpalatable range of options.

One is to cut spending by cancelling or suspending projects such as the planned $500 billion tourist mega-city NEOM.

A second is to raise money by borrowing on international markets or dipping into the country’s $440 billion financial reserves, which is supposed to be held back for future generations or national emergencies. Jadaan indicated that the government would take out loans worth $60 billion and withdraw $32 billion from reserves.

The third is to tax the population, either directly or indirectly: tripling VAT rates, withdrawing cost of living allowances, halting bonuses and salary raises for public employees, raising the cost of services such as water, electricity, transport and health, and reducing or abolishing state subsidies on basic foodstuffs and fuel.

The steps are taken in this regard so far are almost certain to be followed by others. The authorities have a record of introducing such measures gradually. They are expected to proceed to increase fees and charges for travel, licences, passports and other official paperwork, and could also introduce income taxes.

In other words, Saudi citizens are set to bear the brunt of the austerity policy being imposed by the government. Yet there has been no sign of them being offered any quid pro quo for these sacrifices in the form of political reform or being allowed a say in how the country is governed and how its resources are allocated and its money spent.

The biggest single drain on the Saudi budget is one that nobody is permitted to question: the ruinous war in Yemen and Saudi Arabia’s failure to defeat the Houthi Ansarullah movement. Rather than being brought to its knees, it has grown ever stronger while its local rivals have become weakened and divided, and there is no sign of a political solution on the horizon that could bring the conflict to a peaceful end.
The coming months and years will be difficult and indeed painful for the Saudi government. Jadaan’s TV interview may have been a rare moment of official candour in this regard, but it gave only half, if not less, of the full picture.

More trouble in the House of Saud

0 thoughts on “Tough times ahead for Saudi Arabia”