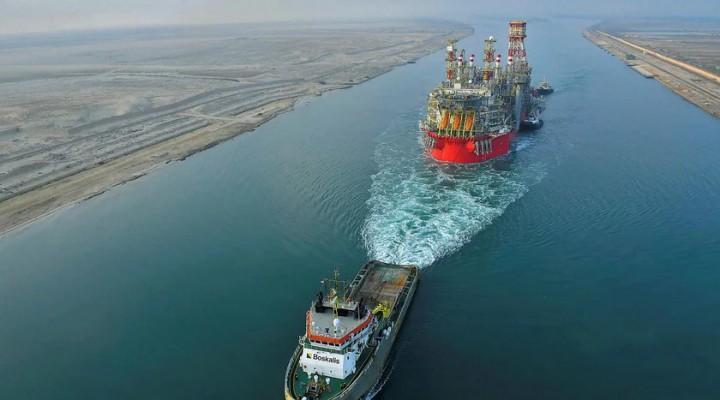 It came as no surprise that Hezbollah sent three unarmed reconnaissance drones over Lebanon’s Karish offshore gas field on Saturday. The decision to do so was taken weeks ago, pending the appropriate moment to implement it. This move, which is a prelude to more to come, had several objectives.

First, to alarm and unsettle the Israeli engineers and workers operating on the gas platforms in the economic zone and make them feel unsafe, eventually causing them to evacuate and stop exploiting the gas until a maritime boundary agreement is reached — which does not look achievable at present.

Second, in his latest speech, Hezbollah leader Hassan Nasrallah undertook to protect Lebanon’s gas fields and prevent Israel from looting them, and to take action against the Greek drilling vessel deployed in the area if it continues stealing Lebanese gas. He made good on his promise, as usual, two days after Israel’s high-handed response to US envoy Amos Hochstein was delivered to the Lebanese government by ambassador Dorothy Shea.

Third, to affirm that Lebanon’s gas reserves dossier has effectively been transferred from the government to the resistance, for it to liberate them as it liberated Lebanon’s occupied territory in 2000 and inflicted a humiliating defeat on the Israeli army.

When Israel announced its air defences had brought down the three drones, a Hezbollah spokesman replied succinctly that “the mission was accomplished and the message delivered.” That means Hezbollah won the first round of ‘psychological warfare’ in this new maritime conflict by rattling the enemy, and also that further military rounds are to follow in the wake of this warning ‘message’. This explains why the Israeli military command declared a state of alert and said it was considering ways of retaliating. Any such retaliation would be costly, as a counter-response has already been prepared with great care, according to high-level sources who spoke to this newspaper.

The three drones cost only a few hundred dollars each, and were shot down by missiles worth hundreds of thousands of dollars apiece. The drones were not sent out with the aim of bringing them back, but to open a new page in the maritime gas confrontation, provoke the Israeli side, and goad it into retaliating in a way that might justify a large-scale missile and drone attack on Israeli gas platforms in the eastern Mediterranean.

The downing of three low-cost unsophisticated drones is no defeat for Hezbollah, and does not warrant Israel’s triumphalist celebrations of ‘victory’ designed to reassure its settlers who fear the outbreak of a regional war which once started would be waged on multiple fronts

It is unacceptable for millions of Lebanese to be denied fuel, medicine, and even now bread, while Israel steals their gas in broad daylight under US protection and prevents them from extracting it by threatening the contracted oil firms such as Total, ENI and Rosneft.

A senior Lebanese official close to Hezbollah told me in an off-the-record interview that the resistance has taken the decision to go to war to free Lebanon’s oil and gas resources from Israeli control just as it freed the south and dismantled Israel’s ‘security zone’ by force of arms. Taking out the gas extraction vessel in the Karish field would be a comparatively simple and uncomplicated task.

The Lebanese resistance did not ask the state’s permission to liberate the south and expel the Israeli occupiers. Nor will it request official approval to liberate the oil and gas reserves in Lebanese territorial waters while five million Lebanese are going hungry.