HOME / WORLD / High stakes in the battle for Sirte 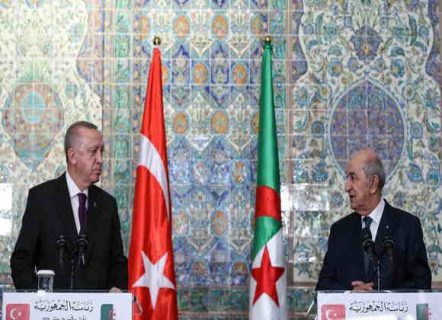 With Algeria engaging in the search for a political solution in Libya, Haftar could be on his way out

A desperate race is on between the rival political and military alliances in Libya, with each side trying to improve its position on the ground maximize its gains to strengthen its hand in any future negotiations. The current battle for the central city of Sirte between the Turkish-backed forces of the Government of National Accord (GNA) and Gen. Khalifa Haftar’s Libyan National Army (LNA) — supported by Egypt, the UAE and France — will be crucial in determining the outcome.

Sirte is an invaluable strategic asset both for Haftar’s allies who are defending the city and the pro-GNA forces trying to recapture it after successfully ending his year-long siege of Tripoli and recovering the town of Tarhouna from his fighters.

Turkish President Recep Tayyip Erdogan, who now effectively calls the shots in western Libya, has stressed there will be no cease-fire or political negotiations until his partners have taken Sirte. That is why he rejected – or rather ignored – last week’s call by Egypt for a truce and talks on a comprehensive solution to the Libyan crisis. Sirte is the gateway both to the east where the country’s main oil and gas terminals are located and the south with its vast hydrocarbons and water reservoirs.

The Turkish president’s ambitions go beyond obtaining the biggest possible share of Libyan oil and gas. He is determined to consolidate Turkey’s political and military influence in the country to strengthen its strategic hand in the Mediterranean. The Turkish daily Yeni Safak, which is close to the ruling Justice and Development Party (AKP), last week revealed plans to establish two Turkish military bases in Libya: a drone hub at the al-Watiya airbase south of the capital and a naval facility in the coastal city of Misrata.

Turkish ground, naval and drone units are already present in strength in the country and offshore. The question now is whether Libya’s neighbours, Algeria and Tunisia to the east and Egypt to the east, will accept this Turkish presence as a fait accompli or seek to confront it, either politically or, perhaps militarily.

The Turkish military intervention in support of the UN-recognised GNA was the main factor in the string of major defeats inflicted on Haftar and his LNA in western Libya. It may lead to his exiting the scene altogether, especially after the discovery of mass graves in Tarhouna where scores of people, including entire families, apparently tortured and executed by his forces during their occupation of the town were interred. The gruesome discovery shocked UN observers and prompted calls for the perpetrators to be tried for war crimes at the International Criminal Court.

Algeria’s government, which has previously kept out of the Libyan conflict, is gravely alarmed by developments, especially the presence of thousands of hard-line Islamist fighters recruited to fight on the GNA side close to its eastern border. President Abdelmadjid Tebboune has for the first time proposed working with Tunisia and Egypt to resolve the crisis. At a press conference last Friday he lamented that Libyans were being killed in a proxy war and said Algeria was seeking to end the bloodshed by political and not military means. Otherwise, he warned, the country could be heading for the same fate as Somalia.

The following day, Tebboune received Aguilah Saleh, speaker of the elected Libyan parliament based in Tobruk and Haftar’s erstwhile ally. The general did not accompany him. This amounted to tacit recognition of Saleh as the leader or representative of eastern Libya – not only because he has substantial tribal support, but also in his capacity as head of an internationally-recognised elected legislature and, as of last month after his fallout with Haftar, self-proclaimed ‘supreme commander’ of the LNA.

Algeria’s engagement in the Libyan crisis and its declared willingness to cooperate with Egypt and Tunisia to resolve it peacefully is an important development. The three countries combined have the capacity to change the balances of power on the ground both politically and militarily due to the influence they wield in Libya, the wider region and internationally.

Many suspects that Haftar’s departure from the scene could be imminent. The same could also be said of GNA head Fayez al-Sarraj, whose actual control in Tripoli — despite having seen off Haftar’s siege of the capital – barely extends beyond the front door of his office.

The race between military and political solutions to the Libyan crisis is set to intensify in the days and weeks to come, especially with Algeria throwing its substantial weight into the fray. It is too early to tell which option will win out, but the stakes are high and the situation is worth watching closely.

0 thoughts on “High stakes in the battle for Sirte”