HOME / WORLD / In 2011 Russia and Turkey did not stop NATO in Libya. Now their voices speak loudest as they try to end 9 years of chaos 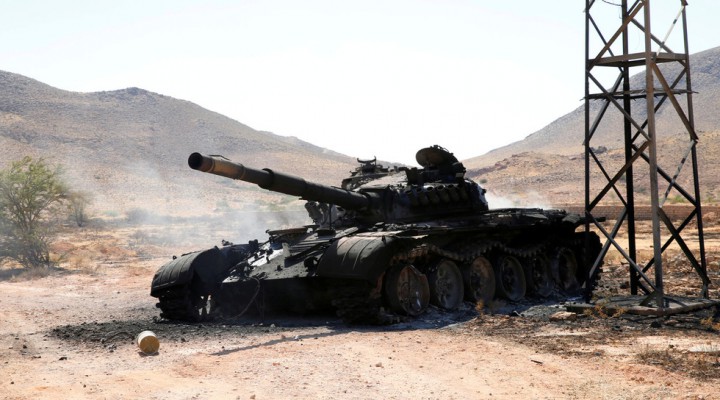 Moscow and Ankara are not responsible for starting the conflict which has ravaged Libya, but they may have a decisive role in ending it, as they lead international diplomatic efforts at the Berlin peace conference.

The two countries opposed the US-led NATO intervention to overthrow Muammar Gaddafi nine years ago but, despite Turkey being a NATO member and Russia being on the UN Security Council, neither exercised their veto prerogatives.

Both states went on to bitterly regret sitting out, as the increasingly violent and morally muddy Arab Spring swept through the Middle East, dragging both into proxy conflicts. But being untainted by the calamity of Western intervention serves the two powers well as they attempt to mediate the many-sided Libyan civil war.

No peace yet, but moving towards a ceasefire

Last weekend’s conference in the German capital ended with a ceasefire commitment agreed to by the leaders of the two warring parties, Fayez a-Sarraj, from the Government of National Accord (GNA) and Khalifa Haftar, who heads the Libyan National Army (LNA), as well as an agreement among all of the attendees to the conference for an enforceable arms embargo.

Russian President Vladimir Putin and his Turkish counterpart Tayyip Erdogan shakes hands during their meeting on sideline of the Libya summit in Berlin, Germany January 19, 2020. © Sputnik/Aleksey Nikolskyi/Kremlin via REUTERS

The Berlin conference follows on the heels of an earlier meeting in Moscow this month between Russian President Vladimir Putin and Turkish President Recep Erdogan, where the foundations of the current ceasefire agreement were negotiated.

While the Moscow meeting failed to produce a ceasefire, it did initiate a process of direct talks between the leadership of the GNA and LNA that carried on into the Berlin conference and contributed to a successful outcome.

Obama’s ‘right thing to do’

Putin and Erdogan are operating on the embers of a landmark Western failure in the region – one that put in doubt the entire rationale of military intervention.

This role of the US and its allies has been widely acknowledged as a disaster (Gaddafi was killed by US-supported rebels after his convoy was attacked by NATO aircraft).

While President Barack Obama later said that intervening in Libya had been “the right thing to do,” he also called the intervention the “worst mistake” of his presidency, blaming the failure of his administration “to plan for the day after” once Gaddafi was removed from power. The US was guilty of an act of commission by getting NATO to use offensive military power against a sovereign state, but could Turkey and Russia have done more at the time?

Libya has historical ties to both Turkey and Russia, the former due to Libya’s status as a province in the Ottoman Empire until 1912, and the latter due to Libya being a client of the former Soviet Union. While Turkey, a NATO member, opposed military intervention, it opted to remain silent instead of actively blocking the campaign, something it readily could have done given NATO’s status as a consensus driven organization.

Likewise, Russia abstained from a critical UN Security Council vote authorizing military force to be used in Libya in support of ostensibly humanitarian activities, instead of exercising its veto power.

In the chaos that followed the death of Gaddafi, Turkey and Russia found themselves on opposite ends of the post-intervention political shakeup, with Turkey supporting the UN-backed GNA, and Russia siding with the Haftar’s LNA.

Ironically, it took military intervention by both countries to create the conditions for the Berlin conference. The dispatch of some 1,500 Russian private military contractors to Libya to fight on the side of the LNA helped tip the balance of power to Haftar’s forces, enabling him to capture most of Libya and threaten the final GNA bastion of Tripoli (President Putin acknowledges the presence of these Russian contractors, although he denies they are working on behalf of Moscow.)

The deployment of Russian contractors in turn prompted Turkey to dispatch military advisors and some 2,000 Turkish-trained Syrian fighters to prop up the GNA.

The alignment of Turkish and Russian military forces in opposition to one another represented “a true regional escalation,” in the words of UN Secretary General Antonio Guterres, bringing a sense of urgency to the Berlin conference, which was also attended by leaders from Germany, France, Italy, the US, the UK, the United Arab Emirates, Egypt, Algeria, China, and the Republic of Congo.

What’s in it for Putin & Erdogan?

The motives of both Russia and Turkey in bringing peace and stability to Libya are as complex as they are diverse. For Russia, bringing Libya back into the fold as a client state would provide a boon to Russian arms manufacturers as well as Russian energy companies.

Haftar’s LNA controls the bulk of Libya’s oil fields but is prevented from selling oil due to UN economic sanctions. These sanctions won’t be lifted until a political solution to the Libyan crisis is reached.

Turkey, for its part, has structured its geo-political position in the eastern Mediterranean Sea around a maritime border recently negotiated with the GNA. This new border gives Turkey considerable leverage when it comes to the establishment of exclusive economic zones in the eastern Mediterranean regarding the ongoing exploration and development of potentially lucrative underwater oil and gas deposits.

The economic benefits this can accrue for both Russia and Turkey, by bringing about a peaceful reconciliation between the GNA and LNA, are obvious.

The crown jewel of such an outcome, however, lays in the improved geo-political posture of both nations that will come by ending the ugly chapter in Libya’s history brought on by the NATO intervention.

The 2011 intervention in Libya was viewed by many in NATO as the precursor to the future domination of North Africa by that organization, an outcome neither Russia nor Turkey supported.

By collaborating on a political resolution to the Libyan crisis, Russia and Turkey solidify their respective economic and political positions in a post-conflict Libya. They also bring an end to the notion of a NATO foothold in the region, gaining some absolution for earlier inaction, and reinforcing the perception that the West can no longer unilaterally remold the rest of the world according to its geopolitical priorities.

One thought on “In 2011 Russia and Turkey did not stop NATO in Libya. Now their voices speak loudest as they try to end 9 years of chaos”