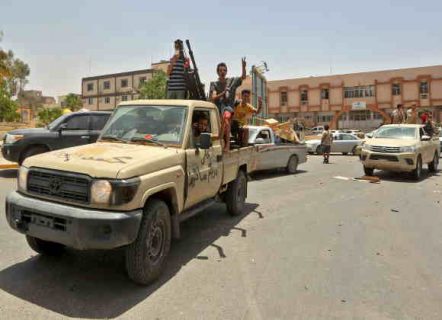 Moscow seems to have concluded that Haftar can’t win, and opted to cut its losses

The success of forces aligned with Libya’s UN-recognised Government of National Accord (GNA) in taking full control of Tripoli, ending Gen. Khalifa Haftar’s year-long siege of the capital, and going on to capture the town of Tarhouna, is a major triumph for Turkish President Recep Tayyip Erdogan. It was his decision to give his full military backing to the GNA that turned the tables both in the air and on the ground: crucially the squadrons of Bayrakdar drones he deployed, and the thousands of battle-hardened Islamist fighters he sent from Syria.

The day after the GNA’s head Fayez Sarraj went to Ankara to celebrate with Erdogan and discuss future plans, Haftar’s allies withdrew from Tarhouna 70km southwest of the capital, depriving him of his main remaining stronghold in western Libya. This sets the stage for pro-GNA forces to advance eastwards towards the so-called Oil Crescent, barring the unlikely prospect of Haftar staging a comeback with the backing of his foreign sponsors: Egypt, France the UAE and Russia.

Intriguingly, as Haftar went to Cairo to seek support, the GNA’s deputy head and foreign minister, Ahmad Muaiteeg and Muhammad Taher Sayyala, were in Moscow.  It was rumoured they were there to make the Russians a tempting offer: to guarantee their interests in Libya and involve their companies in infrastructure projects and oil exploration, as well as to free two Russian academics detained by pro-GNA forces last year and charged with spying.

After their talks in Ankara, Erdogan pledged to put an end to Haftar’s oil-trading activities and ruled out negotiations with the ‘putschist’ general, and Sarraj stressed that the GNA would continue fighting until it recovered control of the entire country. It seemed clear the pair had decided to exploit the collapse of Haftar’s forces to press forward into eastern and southern Libya.

With every passing day, developments seem to confirm speculation about a ‘deal’ or ‘understanding’ between Turkey and Russia over Libya, based on sharing out the spoils and respecting each other’s interests in the country. Muaiteeg’s visit may have been made in that context — Moscow having apparently reached the conclusion that Haftar is incapable of reunifying Libya under his leadership, and turned to Ankara to preserve its interests via a trade-off.

Erdogan has gained some powerful strategic cards in the Middle East by empowering his Libyan allies to achieve the string of victories they have scored on the ground in the past few weeks. Chief among these are offshore oil and gas concessions, the lion’s share of Libyan reconstruction and infrastructure contracts, and the prospect of establishing a military base in Libya to add to the ones it now operates in Qatar, Somalia and maybe Sudan.

This is hugely unwelcome to Haftar’s external backers, and the big unanswered question is how they propose to react to his succession of setbacks. So far, there has been no statement from Haftar or the Egyptian authorities who have been hosting him. The UAE has kept quiet, and France has sufficed with expressing concern.

It is unlikely Egypt would send its own troops into Libya to face off against Turkey’s forces and its allied Islamist militias. Especially not when it is only weeks away from Ethiopia starting to fill the reservoir of its giant Renaissance Dam without an agreement with Egypt and Sudan. Egypt’s top priority is its water security, and a military confrontation with Ethiopia to defend it remains a possibility.

Nine years of conflict in Libya have taught us to be wary of making predictions. Today’s winners can be tomorrow’s losers and vice-versa, and there is still no end to the crisis in sight.

All we can say for sure is that the Turkish president and his GNA allies have won the battle for Tripoli and the western coastline, and all we can do is await the response of Haftar’s backers. They have a choice: either resign themselves to the situation and live with it, or weigh in behind their client as strongly as Turkey did behind its allies. That would mean expanding the scope of the conflict and turning it from a proxy war into a direct one.

0 thoughts on “Turkish-Russian trade-off in Libya?”