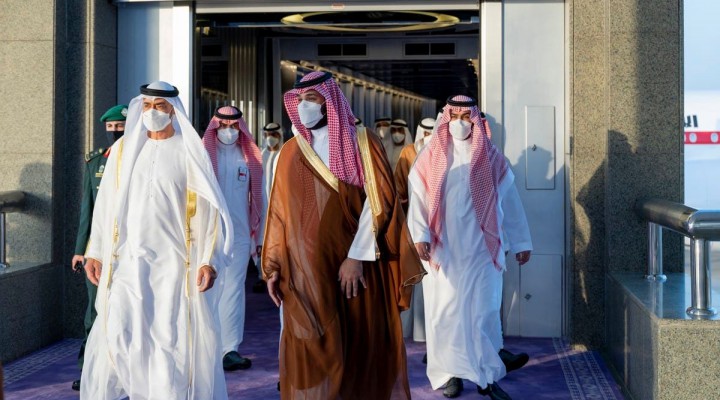 Has the ‘strategic alliance’ between Saudi Arabia and the UAE run its course?

For decades, many Gulf Arabs made a point of insisting they are different to ‘other’ Arabs, especially the ‘Northern Arabs.’ Not just because they have money, and plenty of it. But also due to their political restraint and moderation, their aversion to revolutionary impulses and radical actions, their countries’ internal stability, and their maintenance of a distinct collective Gulf identity.

A glance at the current state of relations between the members of the Gulf Cooperation Council (GCC) gives a completely different picture. Disputes and conflicts between the six countries are growing, and the dream of achieving Gulf unity by forming a confederation that develops into a full union – cherished by Gulf citizens — was watered down and effectively abandoned by their rulers.

The growing rivalry between Saudi Arabia and the UAE is a case in point. The two sides’ quarrels have been mounting and have now extended to oil production. This week’s ‘OPEC+’ talks in Vienna were aborted after the UAE blocked a Saudi-Russian proposal on raising output levels.

A war of words followed between the two countries’ oil ministers on their respective TV channels. It was started, uncharacteristically, by Saudi Arabia’s Prince Abdelaziz Bin-Salman, who criticised the UAE for single-handedly scuppering an agreement that all other members of the group had approved. His Emirati counterpart Suhail al-Mazroui retorted with a veiled accusation that Saudi Arabia was putting its own interests above those of everyone else and trying to impose its views on them.

Tensions between the two sides have been rising for the past three years at least, largely behind the scenes. The oil row brought them out into the open. Several factors contributed to this development.

First, economic competition between the two countries. This is most apparent in Crown Prince Muhammad Bin-Salman’s obsession with creating the basis of a tourism economy in Saudi Arabia to rival the UAE – by promoting social liberalisation and entertainment, easing curbs on women, and building the futuristic city of Neom on the Red Sea to compete in every respect with Dubai. Given that big-spending Saudis constitute the second biggest group of visitors to Dubai, the UAE has cause to worry.

Secondly, last year’s reconciliation agreement between Saudi Arabia and Qatar. The deal was concluded bilaterally and cooked up behind the backs of Riyadh’s partners and fellow Qatar boycotters in Abu Dhabi and Manama, and to some extent Cairo. In the ensuing few months, Qatar’s relations with Saudi Arabia have been steadily improving while deteriorating yet further with the UAE. Viewers of the Al-Jazeera channel and other Qatari media outlets will know what we mean.

Third, Riyadh’s surprise decision to require foreign firms seeking state contracts to relocate their regional headquarters to Saudi Arabia by 2024. This was a direct blow to the UAE and especially Dubai, where most such corporations – including many Saudi-owned enterprises – are based.

Fourth, Saudi Arabia’s anger at the UAE’s unilateral withdrawal two years ago from the war they jointly launched on Yemen. The UAE made the move without prior consultation or coordination with its partner. It did so to spare itself further military casualties and ensure that Dubai and Abu Dhabi would not be targeted by Yemeni missiles as Jeddah and Riyadh were. Abu Dhabi refocused on taking control of South Yemen, where no Houthi Ansarullah forces operate. It prevented the Saudi-based Yemeni government-in-exile from relocating fully to Aden as a ‘second capital’, and sponsored, funded and armed the Southern Transitional Council and its forces to act as its proxies.

Fifth: Abu Dhabi accuses Riyadh of pressing it to normalise relations with Israel and sign the so-called ‘Abraham Accords’ on the understanding that Saudi Arabia would soon follow suit. But Muhammad Bin-Salman reneged on that agreement and backed off. He feared a domestic backlash, and also felt no need to go ahead after Donal Trump was ejected from the White House. Although Bin-Salman had met with Benjamin Netanyahu and Mike Pompeo at Neom to discuss the impending move, he denied that the meeting took place at all – perhaps under pressure from his father the king who might not have known about it.

Ironically, the UAE could now find itself following the lead of its Qatari nemesis and pulling out of OPEC in protest at Saudi domination of the organisation. This week’s drama in Vienna makes that more likely.

Meanwhile, the Saudi-Qatari reconciliation seems set to unravel not only the four-country anti-Qatar collation formed in 2017, but the GCC itself. Qatar has been mending fences with Saudi Arabia and Egypt without complying with any of the coalition’s original demands, and the UAE feels left out in the cold.

To make things worse, on Monday Saudi Arabia’s flagship Dubai-based al-Arabiya channel broadcast an interview with Hamas leader Khaled Mishaal conducted in his office in Doha. Could the UAE retaliate by taking action against the Saudi-owned media outlet6s it hosts? Until recently, that sounded unthinkable. But times change, and no retaliatory or vindictive measure can be ruled out in this very personal quarrel.

Iran and the GCC: Prospects for a Grand Reconciliation

0 thoughts on “Riyadh vs Abu Dhabi”