HOME / WORLD / What chance of pulling off a GCC reconciliation? 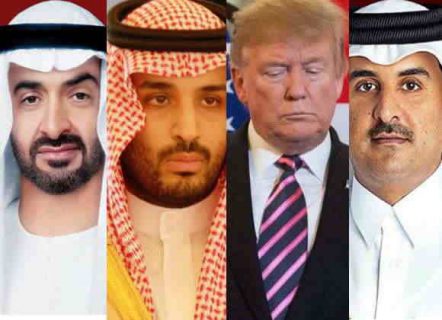 Trump is trying to get Saudi Arabia and the UAE to make up with Qatar, but only to rally them all against Iran

The feud within the Gulf Cooperation Council (GCC) has been brought back to pubic attention by US President Donald Trump’s latest bid to ease it. He has reportedly been trying to persuade Saudi Arabia and Bahrain to re-open their airspace to Qatari airliners because its closure forces them to detour over Iran and earns the country a substantial income in over-flight fees. We haven’t been told of details of these efforts, or whether they have made any headway.

The GCC crisis erupted in the summer of 2017.  It recently marked its third anniversary and continues to rumble on. No serious breakthroughs were ever achieved by various mediators who tried, and it has largely dropped out of the headlines – except on social media, where both sides’ ‘electronic armies’ periodically trade vitriolic exchanges.

Since the crisis began, Qatar has been boycotted by three Gulf states (Saudi Arabia, the UAE and Bahrain) and Egypt. Qatar boasts that it has defied its ‘siege’ and been strengthened by it, becoming more self-sufficient economically and developing new strategic alliances (with Turkey and Iran) to counter its detractors. It is said to have wanted to pull out of the GCC altogether –as it did from OPEC – but to have been dissuaded by Kuwait and Oman.

Gulf sources say that Qatar’s ruler, Sheikh Tamim bin-Hamad Al Khalifa, is becoming more flexible these days about terms for a reconciliation that would end his country’s regional isolation. He tried twice last year to arrange a bilateral entente with Saudi Arabia, but his efforts were thwarted, apparently due to resistance from the UAE and Egypt.

If Trump’s reported mediation bid is to succeed, Qatar will have to submit at least in appearance to at least some of the 13 conditions laid down by its adversaries. These include shutting down the Al Jazeera TV channel and other Qatari media outlets, renouncing and expelling dissidents from other Gulf countries, and cutting off all support to the Muslim Brotherhood and its propaganda platforms in Turkey and Europe.

The Qatari authorities have always deemed these terms to be unacceptable violations of their sovereignty, especially closing Al Jazeera, which serves as their ‘heavy artillery’.  It remains unclear whether Trump secured their willingness to concede to any of these conditions sufficiently to appease Saudi Arabia and the UAE and make them more open to a reconciliation.

Qatar is keen to reach some kind of accommodation due to the approach of the 2022 World Cup football tournament which is due to host. It needs Saudi Arabia, the UAE and Egypt to reopen their airspace to its national carrier and allow their planes to use its airports again. That explains its softening of its stance and its willingness to make concessions. These, our sources say, include toning down Al Jazeera’s output to appease its detractors, but closing the channel is out of the question.

Trump wants the GCC states to reconcile so he can rally all six to his side for a showdown with Iran. His efforts are aimed purely at serving American interests. Whether he can succeed ultimately depends on whether Qatar is prepared to abandon its allies Turkey and Iran, who came to its rescue — economically, logistically and militarily – at the start of the crisis. That is a very big ask.

0 thoughts on “What chance of pulling off a GCC reconciliation?”