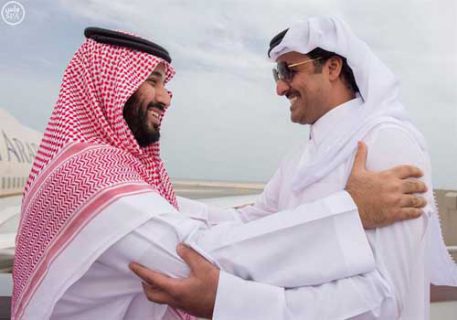 The reconciliation between Riyadh and Doha proceeds apace, but may yet be scuppered

When the shelling and bombing subsides on most fronts in the Yemen war; When images of ‘The Two Muhammads’, the crown princes of Saudi Arabia and the UAE, accompanied by disparaging reports about them taken from the Western press, disappear from the front pages of Qatari-funded media; When the leaders of the worldwide Muslim Brotherhood movement and their cadres in exile start to worry; And when Al Jazeera suddenly goes ‘professional’ in its coverage of Gulf affairs, rather than airing documentaries featuring scandalous secrets about the internal affairs of the ‘blockade states’; When all this happens, you can be sure that reconciliation efforts between Qatar and Saudi Arabia are proceeding apace behind closed doors and have begun to bear some fruit.

Saudi Arabia’s attitude to the other Gulf states and their rulers has always been one of ‘big brother’. What it sees as the ‘little brothers’ — in terms of their size, influence and political and tribal clout  — must be left in no doubt about this fact of life, and make all their political, strategic and economic plans and alliances accordingly. Any attempted transgression must be ‘decisively’ punished, and the ‘decisiveness’ must persist until the transgressor has repented.

This ‘golden rule’ has been the underlying cause of all Gulf quarrels past and present. Other declared reasons – such as sponsoring terrorism, backing the Muslim Brotherhood or the crossing of red lines by Al Jazeera – are merely side effects and symptoms. They are not the real ailment, as anyone familiar with the Gulf region and its rulers’ mentality can attest.

The big news these days is of a secret visit paid to Saudi Arabia last month by Qatari Deputy Prime Minister and Foreign Minister Sheikh Muhammad Bin-Abderrahman Al Thani. Reports say US-backed efforts by Oman and Kuwait to a broker of a Saudi-Qatari reconciliation have made marked progress and may have achieved a major breakthrough. The secret of this initiative’s success is simple: it pandered to the Saudi side’s ego and conformed to its principal requirement as ‘big brother’ – for the ‘little brother’ to come forward as a supplicant with an offer to end the dispute.

Let us recall what happened when a similar step was taken not long ago by the Emir of Qatar, Sheikh Tami bin-Hamad Al Thani. He took the initiative of phoning Saudi Crown Prince Muhammad Bin-Salman, at the urging of US President Donald Trump, and this managed to break the accumulated ice between the two sides in just a few minutes. Joint committees were formed and meetings between officials arranged. But a third party intervened and stirred things up again. The Saudi crown prince was angered and the initiative was jeopardised.  His anger turned to rage when Al Jazeera insinuated that the Qataris had not made the first move in the reconciliation bid, and it was scuppered.

We do not know who the Qatari foreign minister met within Saudi Arabia, but it must have included Muhammad Bin-Salman, who has the first and final say on these matters. It is clear that Saudi Arabia’s lifting of its boycott of the Gulf Cup football tournament in Qatar was one of the fruits of this visit. But don’t get carried away with optimism. A single offensive article or statement, or the intervention of a third party – and there are plenty of third parties in this row – could wreck everything.

Saudi Arabia and Qatar have good reason to reconcile. Both have been exhausted by their quarrel and can ill afford to continue escalating it. The Saudi side’s exhaustion is greater because of its imbroglio in Yemen, the Houthi attacks on its oil facilities, it’s diminished standing in the region, the Islamic world and internationally, and its mounting financial troubles (of which its attempted Aramco sell-off is but one sign).

So what next? Secret visits usually pave the way for public ones. Will we soon see Emir Tamim being feted in Riyadh when he arrives to attend the forthcoming Gulf Cooperation Council summit? Nobody can be sure. But that was certainly the reason the summit was moved from Abu Dhabi to the Saudi capital, so it could serve as a forum for this reconciliation. Qatar has also started making significant changes to its regional policy. It told the US it would join its proposed new coalition to protect Gulf shipping.  And when Turkish President Recep Tayyip Erdogan visited Doha, it was noted that Emir Tamim did not show up at the airport to greet him.

Meanwhile, Muhammad Bin-Salman was given a royal reception when he flew to Abu Dhabi last week, complete with a 21-gun salute, a fighter jet escort and a top-level airport welcoming committee. But behind this show of great amity, there is clearly tension in the relationship, not least because the reconciliation between Riyadh and Doha is set to be purely bilateral to start with (and perhaps to end with), i.e. excluding Egypt and the UAE. That explains Egyptian President Abdelfattah al-Sisi’s earlier surprise trip to Abu Dhabi, and the medals and financial support ($20 billion in investments) he was awarded while there.

If a Saudi-Qatari reconciliation is consummated  – and there are well-placed sources that remain sceptical — it could lead to a further worsening of relations between Doha and Abu Dhabi unless the Qataris have something to offer the Emiratis. And the process could backfire dangerously unless the Egyptians are given something too. Sisi’s ego will also need to be accommodated, and he will settle for nothing short of Qatar offering him the head of the Muslim Brotherhood on a golden platter, or at least severing its ties with the movement. And he has the full support of the UAE in this.

The Brotherhood is right to be worried, and so is Turkey. They stand to be the biggest losers if this reconciliation should come about. But like us, they can only wait to see if it actually happens.

0 thoughts on “Could Qatar ditch the Muslim Brotherhood?”