HOME / WORLD / Gulf rivals on road to reconciliation… But where does that leave Egypt? 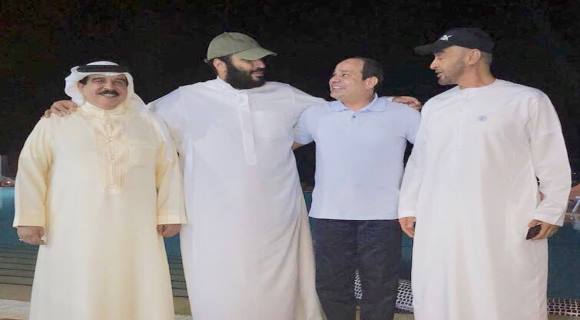 Recent news reports, official actions and diplomatic moves increasingly indicate that a breakthrough could be imminent in the Gulf crisis, bringing an end of sorts to the bitter feud that has pitted Saudi Arabia, the UAE and Bahrain against Qatar.

There have been unmistakable signs in the past few days that a rapprochement between the two sides is proceeding apace. It may be formalised at the end of next month when the annual Gulf Cooperation Council (GCC) summit convenes. The gathering was originally due to be held in the UAE but could be relocated to Riyadh serve as the venue for a public reconciliation, with all six Gulf rulers in attendance for the first time in years.

President Donald Trump has personally been leading diplomatic efforts to reconcile Qatar and its three Gulf adversaries, according to the US-funded Arabic channel al-Hurra, and these endeavours are reportedly at an advanced stage. The US position was underlined by Air Force Chief of Staff Gen. David Goldfein in a speech at the Dubai Air Show calling on the Gulf states to pool their military resources due to rising tensions with Iran.

At the same time, the French news agency AFP, quoting Gulf sources, reported that a high-level Qatari delegation is due to visit Riyadh in the next few days. Our sources indicate it may be headed by Foreign Minister Sheikh Muhammad Bin-Abderrahman Al Thani and will hold bilateral discussions ahead of the multilateral meeting of chief diplomats that precedes and prepares for GCC summits.

Last week’s surprise visit by Prince Khaled Bin-Salman, Saudi Arabia’s defence minister and de facto deputy crown prince, to Muscat to confer with Sultan Qaboos also points in this direction. His talks there are likely to have covered not only the ending of the Gulf feud but also the war in Yemen. It is an open secret that the Omani capital has been hosting secret talks between the Saudis and Yemen’s Houthis.

Then came the equally surprising decision by the three boycotting states to take part in the 24th Gulf Cup football tournament that is to be held in Qatar from 26 November to 6 December. The Saudi, Emirati and Bahraini teams will reportedly be flown directly to Doha for the event, and the three states might even lift their air embargo against Qatar to allow thousands of fans to fly there.

Meanwhile, media outlets speaking for the Gulf rivals have been observing an unprecedented truce. Hostile propaganda campaigns and media exchanges have been halted on both sides, whether on the TV screens or in social media, after two and a half years of non-stop vituperation and trading accusations and insults.

In this calmer climate, Kuwait has resumed its suspended mediation efforts between the two sides, dispatching its foreign minister to see the Saudi king last week.

This all raises a major question. Where does it leave Egypt, the fourth and most important component of the anti-Qatar coalition? Egypt was an enthusiastic participant in the boycott of Qatar, banning its flights and denying its citizens visas, and for its part faced a relentless barrage of attacks and hostile coverage by Qatar’s Al-Jazeera channel and other outlets. Has Cairo been wholly or partially side-lined by its Gulf allies as they have sought to mend fences with Doha? The Egyptian authorities have made no comment on the matter.

The only evidence to the contrary, possibly, is that President Abdelfattah as-Sisi paid an unexpected visit to Abu Dhabi last Wednesday. He was accorded the usual lavish welcome by Crown Prince Sheikh Mohammad Bin Zayed and awarded the country’s highest decoration, and the visit culminated in the inauguration of a $20 billion UAE-Egypt investment fund. But some observers suggested the promised cash was an attempt to placate the Egyptian president and hoodwink him with regard to his partners’ overtures to Qatar.

It was striking that while Sisi went to the UAE he did not go to Saudi Arabia. His last visit there was in early summer to attend the Arab and Islamic summits held in Mecca – i.e. not for bilateral talks — and no high-ranking Saudis have been to Cairo in recent months either.
Moreover, the media truce between the rival Gulf states has not been extended to Egypt. There has been no let-up in attacks on the Egyptian authorities by the heavy artillery of Al Jazeera and other Qatari–funded channels based in Europe or related outlets in Turkey.

This would seem to confirm suspicions that Egypt is being excluded and the impending reconciliation will be confined to the Gulf states alone.

With both sides maintaining a public silence, it is hard to tell what is going on behind the scenes. But some Egyptian observers are already crying foul and warning there could be trouble ahead. Egypt’s leaders were bitterly disappointed by the less than supportive attitude of some of their Gulf allies’ in the high-stakes dispute with Ethiopia over the Renaissance Dam. They would be enraged if a separate Saudi-Emirati-Bahraini deal with Qatar was arranged that excluded them and did not take their interests and demands into account. If the planned reconciliation is not all-embracing, the resolution of one crisis could trigger others, and many of the region’s political equations could change as a result.

0 thoughts on “Gulf rivals on road to reconciliation… But where does that leave Egypt?”