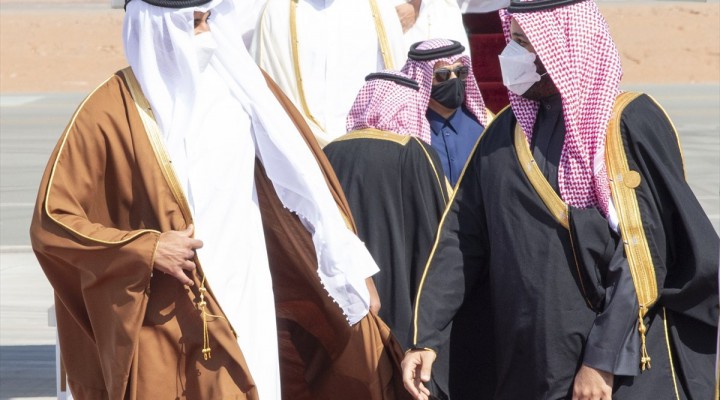 After three and a half years of hostility, much remains unexplained about the Saudi-Qatari embrace

Three things can be noted about the Gulf Cooperation Council (GCC) summit held on Tuesday in the Saudi town of al-Ula that supposedly sealed a reconciliation between Qatar and the countries that have been boycotting it for the past three and a half years — fellow GCC members Saudi Arabia, the UAE and Bahrain along with Egypt.

First, the failure of the nominal host, King Salman, to attend. This is unprecedented. The presidency of the summit was assumed by his son Crown Prince Muhammad Bin-Salman, giving the impression that the country’s de facto ruler will soon be officially crowned.

Second, the attendance of Donald Trump’s son-in-law and senior advisor Jared Kushner – even though he presumably has more urgent matters to attend to at home, such as Trump supporters converging on Washington to protest against the installation of Joe Biden as the next president. Kushner is the ‘hustler’ of Arab-Israeli normalisation, and the Gulf ‘reconciliation’ could be a prelude to more of that.

Third, the most important passage in Bin-Salman’s brief speech to the summit was about Iran. He reiterated that its nuclear and missile programmes and subversive behaviour in the Middle East pose a threat to regional and global security and demand a united response.

Kushner’s presence at the summit and the way the ‘Gulf reconciliation’ is being celebrated are ominous. They may reveal the real agenda behind the deal. Kushner appears not only to have brokered the ‘reconciliation’ but to have forced it through, leaving the parties with no choice but to go along with it or face unpalatable consequences. His only real concern seems to have been for Saudi Arabia and Qatar to reopen their land borders and airspace to facilitate American and Israeli military action against Iran.

Nothing has been published in the media about the substance of this Qatari-Saudi deal other than the reopening of these land borders and airspace. Nothing about Qatar’s willingness or otherwise to comply with the 13 conditions originally laid down by its four detractors – such as closing down the Al Jazeera channel and other Qatari outlets, severing ties with the Muslim Brotherhood and Gulf opposition groups, and dismantling Turkey’s military base in Qatar.

Moreover, the reopening of borders and airspace is confined to Saudi Arabia and Qatar. It does not include the UAE and Bahrain. Does this mean they will remain closed in future? Why were they not included in this ‘historic’ reconciliation? Or is it simply that Qatar’s boycotters have been reduced in number from four to three, with Saudi Arabia agreeing a purely bilateral deal?

The only real reconciliation that seems to have taken place is between America’s al-Aideed military base in Qatar and its Prince Sultan airbase in al-Kharj in Saudi Arabia. Could this be a prelude to Trump and his acolytes launching an attack on in the dying days of their administration, while sharing out responsibility between members of the new ‘Arab NATO’ alliance of Arab monarchies conceived by his son-in-law?

0 thoughts on “The Gulf ‘reconciliation’ summit”