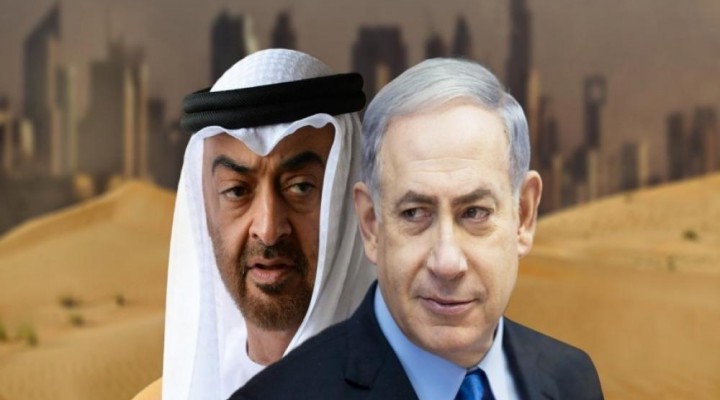 The UAE-Israel deal is ostensibly about peace but actually about war: against Iran — and maybe, later, Turkey

It was no surprise to hear US Secretary of State Mike Pompeo declare at the weekend that the UAE and Israel have agreed to form a security and military alliance against Iran to ‘protect’ US interests and the Middle East after normalising relations via their so-called ‘Abraham Accord’. The two states have never been in a state of war, and the UAE has never harmed a single Israeli either directly or indirectly since its establishment. It had until recently been considered a ‘peaceable’ country — its only direct war having been waged against fellow Arab Yemen. But this characterization is set to change as it turns into the frontline on the Arabian Peninsula of a military confrontation against its eastern neighbour Iran.

All previous Arab-Israeli peace and normalisation agreements may have put an end to actual states of war and hostilities on the ground as they were concluded with confrontation states. But they did not condone any continued Israeli military presence on Egyptian or Jordanian soil and restricted security cooperation within limits. The exception was the Oslo Accords, one of whose key stipulations was the creation of Palestinian security forces (which came to be known as ‘Dayton’s Forces’ after the American general who oversaw them) as an adjunct to Israel’s to prevent any actions against the occupation and its settlers.

The UAE-Israel deal takes things to a whole new level, breaking all former taboos under the new guise of ‘peace-for-protection’. The focus is mainly on the security and military aspects and permitting an Israeli presence in bases and outposts on Emirati soil. The presence of Israeli National Security Advisor General Meir Ben-Shabbat and Mossad chief Yossi Cohen on the El Al flight that took Jared Kushner from Tel Aviv to Abu Dhabi makes this plain. The Israelis are being welcomed to the Arabian Peninsula not just as guests or tourists but as protectors and allies.

The latest sermon from Saudi official cleric Abdul Rahman al-Sudais, Imam of the Grand Mosque of Mecca, singing the praises of normalisation with ‘the Jews’ and upholding their rightful possession of the land is a sign of things to come.

This agreement and those that will follow mean there will be an Israeli military and security military presence just across the water from Iran’s oil and military infrastructure on the Gulf’s eastern coast, right on the borders of Saudi Arabia, Qatar and Oman, and within striking distance of Yemen. According to Pompeo, this agreement will transform the conflict in the Middle East from Arab-Israeli to Arab-Iranian, and perhaps Arab-Turkish later on. And while Israel is certainly interested in commercial and financial deals with the Emirates, security and military considerations take precedence due to the supposedly existential threat posed by Iran according to both US and Israeli assessments.

A key Israeli priority is control of maritime routes, and the agreement positions Israeli forces just a few kilometres from the Strait of Hormuz and the Sea of Oman. If reports of Israel’s intention to establish military bases in Aden in coordination with its new UAE ally are true, that would entail control over the Bab al-Mandeb Strait that governs access to the Red Sea, Suez Canal and Gulf of Aqaba.

The Trump administration is no longer trying to create an ‘axis of moderation’ joining the Gulf states with Egypt, Jordan, and Morocco. These three countries lost their enthusiasm for the idea after it became clear this coalition would be Ied by Israel and could involve them in wars to consolidate its dominance against Iran and Turkey, the Middle East’s other two rising powers. So Washington has settled for the consent of most (if not all) of the Gulf states, at least in principle.

We have still only seen the tip of the iceberg of the UAE-Israeli agreement. All we have to go on are leaks and briefings by US and Israeli officials which give only a small part of the picture. Saudi and Bahraini airspace has now been opened to allow Israeli civilian and military aircraft to fly through en route to the UAE. They may later do so to bomb Iranian nuclear reactors and infrastructure. We cannot anticipate the next shocking surprise. But it is not unlikely that Abu Dhabi has been urging Washington to compel other Gulf states such as Qatar, Saudi Arabia and Oman to sign their own ‘peace’ agreements with Israel too, so that the UAE does not remain standing alone in a position which most of the Arab peoples find abhorrent. This would explain the growing direct or indirect applause and diminishing criticism of the UAE’s move in the overwhelmingly state-controlled Arab media.

The UAE-Israeli agreement is ostensibly about peace but implicitly about war. Why else would the UAE be purchasing F-35 stealth aircraft with US approval? Israel’s objections to this deal are purely theatrical. It knows these planes would never be used against it. They are to be used against Iran and its Axis of Resistance, and to provide their manufacturer Lockheed Martin with additional funding.

Israel is already engaged in war by stealth against Iran by bombing its allies and bases in Syria, Iraq and Lebanon and sabotaging its vital infrastructure. It is currently preparing for this war to be transferred to the Iranian heartland, and to be waged directly from the soil of its new Gulf allies. Secret talks between Tehran and Washington on an amended nuclear deal could conceivably avert that. But Israel remains the biggest winner in all this, if only temporarily.