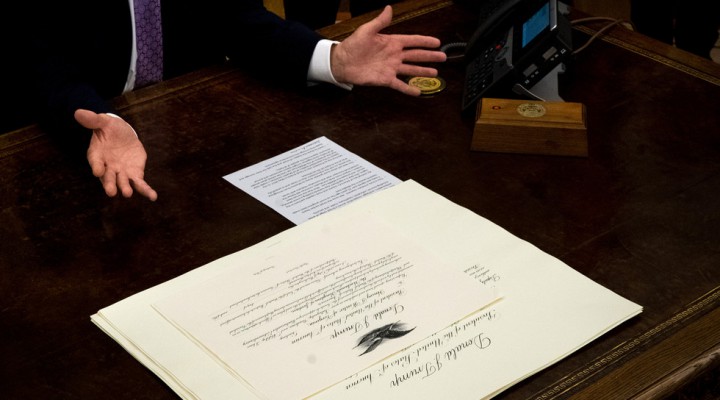 Trump announced that the US, Israel and the UAE have agreed to a plan that would trade an Israeli pause to annex portions of the West Bank for a normalization of relations. But is this all just one more Trump con?

The surprise announcement by President Donald Trump that Israel and the United Arab Emirates (UAE) have agreed to the “full normalization” of relations took most experts and observers by surprise. Under normal circumstances, this kind of breakthrough announcement is the byproduct of intense negotiation over time that is usually picked up on by a media programmed to look for telling clues, or primed with timely leaks, neither of which was in play here.

Trump’s last big foreign policy rollout centered on the announcement of the so-called “deal of the century”, a controversial peace plan between Israel and Palestine which appeared to die on the vine primarily over Israeli plans to annex portions of the West Bank ostensibly under Palestinian control.

There were no indications that such negotiations were either in the works, underway, or nearing completion. Furthermore, Trump has been mired down in domestic controversy surrounding his management of the Covid pandemic, focused on gaining control of an election narrative that has him facing off against a Joe Biden/Kamala Harris ticket that has surged to a double digit lead in the polls. Besides that, he’s been trying to manage a trade war with China and a controversial troop withdrawal from Germany.

Israeli Prime Minister Benjamin Netanyahu and Sheikh Mohammed bin Zayed, the UAE’s autocratic ruler, have likewise both been bogged down in crises of their own.

Netanyahu is preparing to stand trial on corruption charges and is under pressure from protestors angered by his lackluster response to the Covid pandemic. On the foreign policy front Netanyahu has been balancing a potential conflict with Hezbollah in Lebanon, countering the Iranian presence in Syria, and dealing with the potential fallout of the planned West Bank annexation.

For his part, Mohammed bin Zayed has been trying to extricate himself from a disastrous war in Yemen where his forces were fighting alongside Saudi Arabia against Houthi rebels and managing a potential crisis with Iran in the Persian Gulf.

Further muddying the water is the fact that when Israel and the UAE discussed formal cooperation over a response to the Covid pandemic, back in June 2020, the deal quickly bogged down due to angst on the part of the UAE over Israel’s plans to annex territories in the West Bank.

Indeed, Mohammed bin Zayed made it clear that his priority in reaching this agreement was stopping the Israeli annexations, and that cooperation with Israel came second, and was a matter for continued discussion. “During a call with President Trump and Prime Minister Netanyahu,” Mohamed bin Zayed tweeted shortly after Trump made his announcement, “an agreement was reached to stop further Israeli annexation of Palestinian territories. The UAE and Israel also agreed to cooperation and setting a roadmap towards establishing a bilateral relationship.”

In retrospect, the urgency with which the UAE and, by extension, the entire Arab world attached to preventing Israel’s West Bank annexation should have been a tip off that such a deal could at least be theoretically possible. Both the UAE and Saudi Arabia endorsed the Israeli-Palestinian Peace Plan when it was first announced, although their ardor for the agreement diminished in the face of vociferous Palestinian objections over Israel’s annexation plans.

By supporting the “Deal of the Century”, the UAE and Saudi Arabia had made a strategic decision that pursuing peace with Israel was in the long-term collective security interest of the Gulf Arab States. It therefore should not come as a surprise to anyone that there would be a last-ditch effort at diplomacy to save the deal by providing Netanyahu an off-ramp from his very public decision to pursue annexation.

What was a surprise, however, was that it was the UAE and not Saudi Arabia which took the lead on implementing the deal-saving diplomacy. By becoming the first Arab nation in 26 years to make peace with Israel, the UAE appears to have asserted itself—for the moment at least—as the dominant Gulf Arab state, supplanting Saudi Arabia, which has been tied down in Yemen and further mired in one domestic crisis after another.

But appearances can be deceptive. Saudi Arabia has been in the driver’s seat from the very beginning when it comes to the Trump administration’s efforts to formulate a lasting Israeli-Palestinian peace plan, and it would be curious indeed if it were to cede the spotlight to the UAE at the last minute.

A closer examination of the announcement regarding the UAE-Israeli peace plan shows that while long on rhetoric the deal is short on details. While President Trump and Prime Minister Benjamin Netanyahu have emphasized the normalization of relations, the UAE has put stopping the Israeli annexations first, begging the question as to which of these competing priorities takes precedence, and if one is necessarily contingent upon the other. Indeed, as Netanyahu himself declared shortly after the Trump announcement, the plans for annexation are only “delayed”, and that they still remain “on the table” for future implementation.

Rather than pushing Saudi Arabia aside in a sign of strength, the UAE decision to engage diplomatically with Israel appears more and more like a last-ditch bit of diplomacy hammered out by the US on behalf of Israel’s beleaguered Prime Minister, whose continued hold on power most probably would not have survived the controversy surrounding implementation of his plans to annex the West Bank. By preserving Netanyahu’s short-term political viability, the US and UAE have put a pause to an action that would have undone much, if not all, of the diplomatic groundwork done regarding the “deal of the century”.

But the UAE-Israeli peace agreement is more about the potential for better relations than the reality. The fact is there is much work left to be done, and beyond the rhetoric of the joint statement, little to actually build upon.

Netanyahu will soon come under political pressure to move forward with the annexation plans from the hardline Israeli settlers who constitute a significant part of his constituency. If the UAE believes that any normalization of relations is contingent on the permanent cessation of these plans, Netanyahu would have to act in a manner that would place him in domestic political peril at the moment of his greatest vulnerability—on the eve of his corruption trial.

The hard truth is that there is not a UAE-Israeli peace agreement worthy of the name, only a wordy statement lacking in the kind of detail necessary for success.

Saudi Arabia’s silence on this matter may very well reflect the reality that it knows this agreement is doomed to fail, and as such did not want to attach itself to a sinking ship. It is also likely that President Trump’s advisors are likewise aware of the probable cause for Saudi reticence but agreed to move forward as a favor to Netanyahu.

Keeping in mind what former national Security Advisor John Bolton said about everything Trump does being related to his reelection as President, such a move makes sense. Trump doesn’t need this deal to actually succeed—all he has to do is keep the deal viable through the November election in order to maintain the perception of success, and he can mark it up as a victory.