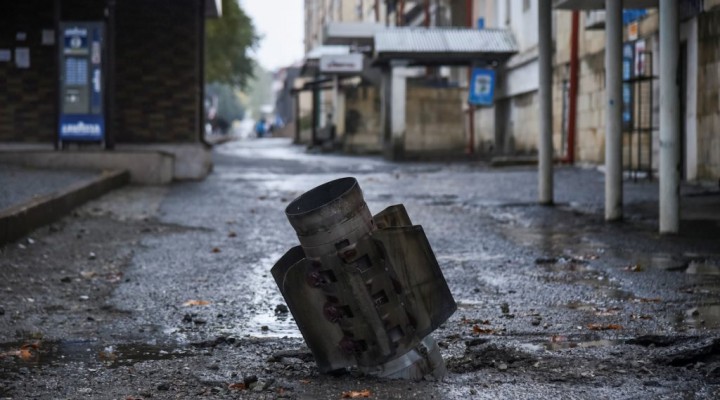 The wars that have afflicted our ‘Middle East’ region incessantly since the start of the last century have taught us two things: that ‘dormant’ ethnic and religious conflicts can be reawakened at any moment; and when truces are agreed they prove unreliable and short-lived so long as the underlying causes are not tackled.

The breakdown of the Russian-brokered humanitarian cease-fire between Azerbaijan and Armenia in Nagorno-Karabakh – where hundreds have been killed and thousands displaced on both sides in the past two weeks – did not therefore come as a surprise.

The Azeri-Armenian war that broke out after the collapse of the Soviet Union over the disputed district, which is legally part of Azerbaijan but has a majority Armenian population, was suspended rather than ended by the cease-fire negotiated in 1994.

The latest flare-up threatens to spread through the Caucasus and beyond and could, as in the Balkans, lead to the break-up of some states and the creation of new ones while opening the floodgates to big-power military intervention. Two states in particular would be targeted by this: Turkey and Iran.

Ethnically Turkic and Shia Muslim Azerbaijan feels stronger now than in the 1990s, empowered by its oil and gas wealth and the backing of two regional powers: Turkey and Israel. That is what prompted President Ilham Aliyev to reignite the Karabakh battlefronts in the hope of achieving better results than the last round and retaking the enclave from Armenian control. Armenia wants it to be either an independent state or part of its territory and has the backing of Russia, bolstered by a mutual defence treaty.

Some of the Middle East’s wars have been partly over oil or gas pipeline routes. That applies to the current war in Syria, and the sickness now seems to have infected the Caucasus. The gas pipeline linking the Caspian Sea to Turkey, and onwards to Europe and Israel, passes close by the combat zone and is a factor in the conflict, though by no means the only one.

There is a bigger picture. Turkish President Recep Tayyip Erdogan longs to be crowned leader of the Turkic and Islamic worlds by reviving a Turkic/Ottoman empire stretching from the Uighurs of western China to south-eastern Europe. He believes these are propitious times to advance this aspiration. That is why he started his war in Syria and went on to extend it to Libya. Now he is sending Turkmen fighters and Arab jihadis to Azerbaijan to settle the conflict in its favour with the aid of highly effective Turkish-made combat drones – operating, ironically, alongside Israeli drones.

Another irony is that the Sunni-Shia sectarian factor which the US has been using to set Sunni Arab countries against Iran has been over-ridden in this case. Most of the ‘Sunni’ Gulf states have sided with Shia Azerbaijan, as have their arch-rival Turkey and newfound friend (of some of them) Israel.

Egypt is an exception in this regard. It has taken a contrary stand to its Gulf allies and sided with its old Russian partner. It was announced this week that the two countries would hold joint naval exercises in the Black Sea for the first time ever. The Russian-Egyptian alliance foiled Erdogan’s endeavours in Libya and previously, partially, in Syria. Now it is asserting itself in the Caucasus, with the Egyptian leadership openly backing Armenia and offering it assistance with a view to countering its Turkish foe and curbing Erdogan’s nationalist/Islamist ambitions.

Amid this tangled web, Iran might be a main target of the rekindling of the Karabakh conflict at this time. The US and Israel are seeking to drag Iran into a war of attrition in which Azerbaijan, which hosts a substantial Israeli military and intelligence presence, could play a major part.

Ethnic Azeris constitute around a quarter of Iran’s population, concentrated in the northwest, and although well integrated culturally and politically, Iranian media have accused the US and its allies of trying to foment unrest among them by nurturing separatist Azeri nationalist groups.

A more immediate concern is that Azerbaijan could be used to mount cross-border attacks against Iran. In a pointed warning to Azerbaijan and Turkey, President Hassan Rohani served notice last week that “Iran will not tolerate any country sending terrorists to its border under any pretext.” This followed reports that Turkey had moved fighters affiliated to the so-called Free Syrian Army from Libya and Idlib to the Nagorno-Karabakh battlefront to fight alongside the Azerbaijani military, reportedly for monthly salaries of $2,000 per ‘jihadi’.

It would seem that plans to destabilise Iran by sponsoring, funding and arming elements of minority ethnic groups (Arab, Kurdish, Baluch and Azeri), which Saudi Crown Prince Muhammad Bin-Salman alluded to three years ago, are currently being activated in coordination with the US and Israel. This might explain Erdogan’s latest bid to ease tensions with Saudi Arabia.

We are facing the prospect of new conflicts that could overturn the existing order of alliances in the region. Things should become clearer once the US presidential election circus is over.

0 thoughts on “Nagorno-Karabakh: the bigger picture”