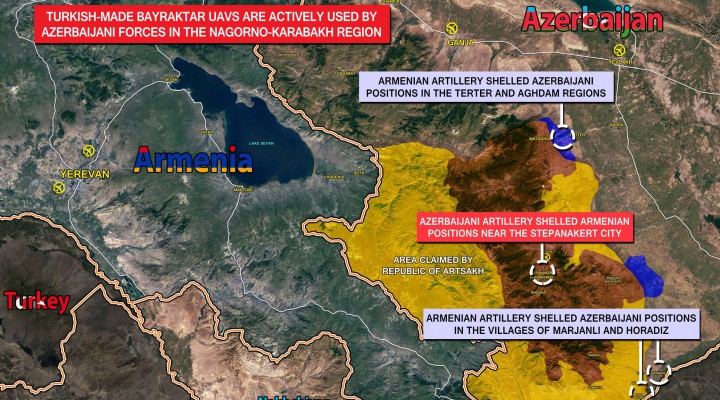 The Armenian-Azerbaijani war has been raging in the South Caucasus. Clashes between the sides erupted in the contested Nagorno-Karabakh Region (de-facto controlled by Armenia) on September 27 and since they have significantly intensified causing thousands of casualties. Azerbaijan, supported by Turkey, clearly aims to capture the entire area of Karabakh and settle the Karabakh question by dismantling the self-proclaimed Nagorno-Karabakh Republic. And as of October 2, there are no indications that the hostilities will be ceased anytime soon.

The Azerbaijani leadership instigated by the Turkish ‘Neo-Ottoman Empire’ demonstrates the determination to deliver a devastating blow to Armenian forces. Additionally to military targets, Azerbaijani forces have been pounding cities and objects of the infrastructure in the contested region.

The total enemy losses from September 27 to 08:00 pm on October 2 are as follows:

up to 230 tanks and other armored vehicles;

Claims of Armenia during the past 24 hours only:

Armenian Troops retake some position on the frontline:

The full-scale advance of Azerbaijan(Turkey) on the Nagorno-Karabakh region became possible due to actions of the current Armenian government led by Prime Minister Nikol Pashinyan. Pashinyan and so-called ‘younglings of Soros’ that seized power as a result of the 2018 coup in Armenia provided an extensive anti-Russian campaign undermining relations with the only real guarantor of the Armenian security and sovereignty and thus shaky stability in Karabakh. This campaign led to the expected result. Azerbaijan and Turkey used the unwillingness of Armenia to keep the real (not formal) alliance with Russia to achieve their own military and political goals. Turkey, which is being turned into the Neo-Ottoman Empire by Recep Tayyip Erdogan has been for a long time seeking to secure its position in the South Caucasus additionally to the recent gains in the Middle East. Its current goal is the secure own role as the biggest energy transport hub from the West to the East in the region, and strengthen the position of the leader of the Turkic world. In the event of the success of the Turkish-backed push to capture Karabakh, these goals will be achieved and the popularity of Erdogan will increase even further.

The impact of Azerbaijani strikes on the city of Stepankert, the capital of the Nagorno-Karabakh Republic:

In these conditions, the ongoing Armenian-Azerbaijani(Turkish) war was not some ‘unexpected aggression’ as the Pashinyan government pretends. In fact, it seems that the pro-US government of Armenia is about to achieve the result that it wants – to settle the Nagorno-Karabakh question by losing this territory, break relations with Russia, including the removal of the military base in Gumri, and move towards the joining of NATO (or at least becoming a NATO associate partner).

On October 3, the Armenian Defense Ministry announced that the Armed Forces of Armenia are now on full combat readiness. Such a declaration on the sixth day of the war seems to be at least a bit strange. This becomes even more strange if one takes into account that Armenia and the Nagorno-Karabakh Republic insist that they are in the war with both Azerbaijan and Turkey, and Turkey even uses its air force to attack Armenia (shooting down its warplanes). If this is true, why is Armenia not using all of its means and measures to repond to these attacks? For example, Iskander missile systems. Iskanders obtained by Armenia do not have nuclear warheads, but even conventional missile strike on the military infrastructure of the ‘enemy’ could cause a notable impact. Contrary to direct actions, the Panshinyan government focused on the propaganda, including attempts to discredit Armenia’s remaining allies in the Collective Security Treaty Organization (CSTO), including Russia. Erevan simultaneously does no active steps to provide a real response to the aggressor that allegedly attacked Armenia and blames own allies for inaction. From this point of view, Armenian claims about Turkish F-16s participating in the conflict look like a blatant propaganda to discredit the CSTO.

The new best friends of Armenia in the Washington establishment are interested in this scenario also. Their goal is to destabilize the region, undermine Russian positions there and create a crescent instability that later will be used in attempts to attack and destroy the Russian statehood. After a potential success of Azerbaijan in Karabakh, the area of instability will likely expand towards the Northern Caucasus, including efforts to return Abkhazia and South Ossetia into the orbit of NATO. Turkey already has a pretty high influence in Abkhazia, including business and special ties with the local elites and services.

This will also contribute to the Washington-led campaign to pressure the Russian energy sector. The campaign in the Nagorno-Karabakh will allow to boost the capacity of the TANAP and thus will lead to a further decrease of Russian gas exports through Turkey and further.

Meanwhile, Russia is in a stalemate. The Armenian-Azerbaijani war has been developing in such a way that could lead a military victory of Azerbaijan within 7-14 days. During such a short period, it is practically impossible to organize on the part of Russia even an unofficial supply of weapons and the deployment of PMCs to the conflict zone in a way that would not publicly violate the international law and not make Russia a party to the conflict.

The real roots of the crisis are not a secret for the Armenian society. According to local sources, the idea of changing Pashinyan to Robert Kocharyan or some another strong leader is becoming increasingly popular. However, even if such a scenario occurs in the coming days, what is unlikely, Armenia will get a direct military assistance from the CSTO only if it is able to provide irrefutable facts of foreign aggression on its sovereign territory.