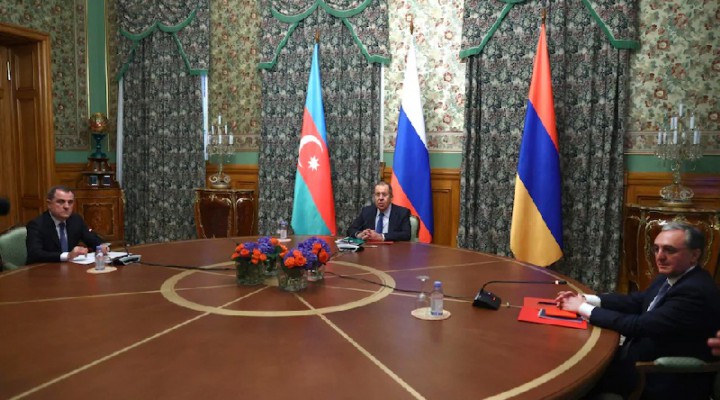 It was a diplomatic coup for Russia to broker a ceasefire between Armenia and Azerbaijan since it restored Moscow’s relevance to the conflict, but for as positive of a development as this was, it’s uncertain whether it’ll last and will thus serve as a litmus test of exactly how much influence the Eurasian Great Power still holds over its “sphere of influence” in the South Caucasus.

The world is celebrating the Russian-brokered Armenian-Azerbaijani ceasefire which went into effect at noon on Saturday following over 10 hours of negotiations between Foreign Minister Lavrov and his two counterparts. Not only is it supposed to serve immediate humanitarian purposes, but it’s also a diplomatic coup for Russia which restored Moscow’s relevance to the conflict. Turkey had hitherto been considered by many to be the most important external party shaping the course of events, yet Russia proved that it’s capable of leveraging its excellent relations with both warring sides in order to bring about at least a temporary halt to the fighting. For as positive of a development as this was, however, it’s uncertain whether it’ll last and will thus serve as a litmus test of exactly how much influence the Eurasian Great Power still holds over its “sphere of influence” in the South Caucasus. What follows is a list of observations about the ceasefire and a brief explanation of each one. It aims to provoke critical thinking among all interested readers, many of whom are still struggling to understand the dynamics of this complex conflict. Without further ado, here are the most important points to pay attention to:

* Russia’s “Balancing” Act Brought Both Parties To The Table

Contrary to what many in the Alt-Media Community have been misled into believing about Russia supposedly favoring Armenia over Azerbaijan, Moscow actually has equally strategic relations with both countries as a result of its “balancing” act of the past few years, in particular what the author previously described as its “Ummah Pivot” towards Muslim-majority states. Had the Alt-Media Community’s infowar narrative been accurate, then Azerbaijan wouldn’t have had any reason to trust in Russia’s diplomatic neutrality as a mediator and thus the talks might never have taken place at all. Going forward, observers must recognize that emotional arguments about Russia’s historical and religious connections with Armenia are generally brought up for the purpose of misleading their targeted audience into overestimating the influence that those two factors have on the formulation of Russian foreign policy. The intent is to make others think that Moscow believes Yerevan’s dangerous claim that the war is a “clash of civilizations” between Christianity and Islam, which isn’t true.

The cliched phrase that “it takes two to tango” is relevant in light of the latest ceasefire since it wouldn’t have been agreed to had both warring sides not had the political will to temporarily halt the violence. Their motivations in this respect differ since Yerevan needs time to recover from the devastating onslaught of the Azerbaijani Armed Forces while Baku understands the soft power importance of pushing a political solution to this long-running conflict instead of imposing a military one (no matter its legal right to do so). The coming winter also likely played a role as well. It’s already difficult enough as it is to fight in mountainous terrain, and this becomes practically impossible once it starts heavily snowing. Azerbaijan already liberated several lowland villages so it has something of tangible significance to show off to its people while Armenia still holds the highland core of the occupied territories which similarly allows it “save face” as well. That said, there are several of reasons why the war might soon resume, but those points will be discussed later in the article.

Russia was already seeking to diplomatically intervene in the conflict, not only because of its excellent relations with Armenia and Azerbaijan but also because it regards the South Caucasus as its “sphere of influence”, though reports about foreign militant activity in the conflict zone and Iran’s peace efforts probably accelerated this development by giving it a renewed sense of urgency from Moscow’s perspective. The author discussed the first factor more in detail in his recent piece “Explaining The Incongruence Between The Iranian & Syrian Stances Towards Nagorno-Karabakh” while the second one was touched upon in his article about how “Iran’s Official Support Of Azerbaijan Proves That Mutual Suspicions Can Be Overcome”. Taken together, Russia was seriously concerned that its security and diplomatic interests would be irreparably harmed if it hadn’t acted when it did. Not only could militancy rekindle the conflict in the North Caucasus if it isn’t contained, but Russia’s post-Soviet role in the region might be replaced by the joint Turko-Persian one which historically precedes it.

* The OSCE Retained Its Leading Role Over The Peace Process

The Moscow communique reaffirmed that the OSCE Minsk Group remained the only format for politically resolving the Nagorno-Karabakh conflict, which importantly reinforced Russian influence after Iranian attempts to replace it as explained in the previous observation and Turkish ones to promote a military solution instead. It’s unclear at this time whether Armenia will abide by the Madrid Principles, but that slate of proposals which was last refined in 2009 represents the most pragmatic way to end the conflict. Azerbaijan’s annoyance at the OSCE Minsk Group’s nearly three-decade-long failure to guarantee Armenia’s military withdrawal from the occupied regions in line with the four UNSC Resolutions on the matter (822, 853, 874, 884) was attributed by many as the reason why it launched its counteroffensive to change the status quo late last month in response to provocations along the Line of Contact (LOC). Without any measurable progress on this front such as agreeing on a timeline for Armenia’s withdrawal, it’s unlikely that the current ceasefire will last all that long.

Azerbaijan accused Armenia of shelling its second-largest city of Ganja approximately 12 hours after the ceasefire was supposed to have gone into effect, which Yerevan denied but if proven true would represent the second major attack against this civilian target located outside the conflict zone. That would risk embarrassing Russia after all that the Eurasian Great Power did to get Azerbaijan to halt its counteroffensive. Armenia would therefore have proven itself to be a real “rogue state” in every sense of the word since it would be signaling to Russia that the latter doesn’t have any real influence over it, at least as it relates to the Nagorno-Karabakh Continuation War. Armenia claims that Azerbaijani violated the ceasefire first and that all its forces are doing is responding to its enemy’s provocation, though shelling a civilian location outside the conflict zone is a disproportionate response by any metrics even in the unlikely event that it’s telling the truth about not having started this latest tit-for-tat.

* Pashinyan Is Under Immense Pressure From All Sides

Armenia’s erratic behavior can be explained by the fact that Prime Minister Pashinyan is under immense pressure from all sides. Not only did Russia presumably pressure him to order the Armenian separatists to stand down, but radical nationalists are exerting grassroots pressure upon him to continue the war until a “decisive victory” is achieved (which includes reconquering recently lost land). This Color Revolutionary-turned-leader has first-hand experience in weaponizing his society’s hyper-jingoist sentiment for regime change purposes so he understands very well just how risky his political future would be if he abided by the four UNSC Resolutions demanding his country’s military withdrawal from the universally recognized Azerbaijani territory that it illegally occupies. He was also never in Russia’s good graces either so Armenia’s patron has little interest in engaging in any “regime reinforcement” efforts in his support. Pashinyan is also keenly aware that he’d probably go down in Armenian history as its most hated leader ever if he “surrenders” for the “greater good”.

* A Winter War Isn’t Preferred, But Is Still Possible

If the ceasefire violations continue and Russia is unable to exert its peacemaking influence over the increasingly “rogue state” of Armenia, then a winter war is indeed possible even such a scenario isn’t preferred. It was already explained how mountainous fighting in these conditions is almost impossible, but both sides could resort to shelling, drone strikes, airstrikes, and missile strikes during this period instead. That might unfortunately worsen the humanitarian hardships placed upon the civilians caught in the crossfire between the warring states, thus compelling another peace push by all relevant regional stakeholders, though it’s unclear whether it would succeed. It’s certainly not in Russia’s interests to have its ceasefire shredded so shortly after its herculean diplomatic efforts to broker it, nor does Moscow want to see Tehran or Ankara’s preferred solutions to the conflict replace its own, yet that might end up being exactly what happens if Pashinyan can’t resist the intense grassroots pressure upon him to continue the war and keeps defying the UNSC Resolutions.

Russia’s model of maintaining the traditional OSCE Minsk Group diplomatic means for resolving the Nagorno-Karabakh conflict won out for the time being in its unexpected competition with Iran’s efforts to establish an alternative diplomatic platform and Turkey’s desire to do away with diplomacy entirely by focusing solely on supporting a military solution. If the Russian-brokered ceasefire doesn’t hold, then this competition between the three partnered Great Powers will re-erupt with uncertain consequences. It’ll be very difficult for Moscow to argue that the OSCE Minsk Group has any remaining relevance while Tehran and Ankara’s cases would be strengthened by default. In that scenario, a compromise between them might be the only way out of the war. A new diplomatic platform might be created by Iran which includes both Russian and Turkish participation without any role being given to the OSCE Minsk Group’s American and French co-chairs. Its main goal would be to craft a timetable for Armenia’s military withdrawal from Azerbaijan in accordance with UNSC Resolutions.

The Russian-brokered ceasefire was a diplomatic coup for Moscow which showed that the Eurasian Great Power is still a force to be reckoned with in the South Caucasus even if Turkish influence there has recently grown. The competition between those two countries is manageable for the moment, but their contradictory views on the best way to resolve the Nagorno-Karabakh conflict are irreconcilable and could lead to a new round of rivalry if the ceasefire fails. Everyone is holding their breath to see whether or not that’ll happen, which unfortunately can’t be discounted after Armenia showed the world just how much of a “rogue state” it’s become after reportedly attacking Azerbaijan’s Ganja for the second time in violation of this weekend’s Moscow communique. If events spiral out of Russia’s control, then it might have little choice but to support the Iranian push to establish an alternative diplomatic platform for resolving this conflict, one which might closely resemble the Astana peace process that those two and Turkey trilaterally lead in Syria. It’ll remain to be seen whether that’s necessary, but the coming week will provide a clearer idea of just how likely that scenario is.