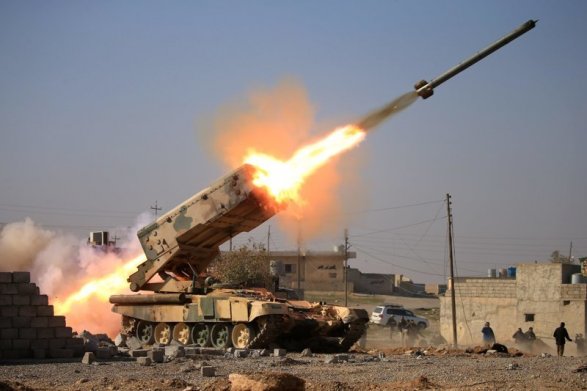 On September 28th, the Ministry of Defense of the Nagorno Karabakh region announced that the Azerbaijani armed forces were using TOS heavy artillery.

“Today the enemy used TOS heavy artillery systems in the southern and southeastern directions of the front.  The use of weapons proved to be ineffective.  All the information spread by the enemy about the losses of the Armenian side does not correspond to reality,” the statement said.

A video was also released presumably showing the Azerbaijani side use the TOS-1A Solntsepek against Armenian positions.

The TOS-1A Solntsepek is a multi-barrel rocket launch (MBRL) system designed and developed by the Russian company – Omsk Transmash Design Bureau. It is the latest variant of the TOS-1 flamethrower system.

The TOS-1A was commissioned into service by the Russian Army in 2001. It offers direct fire support to complement main battle tanks and infantry fighting vehicles on the battlefield.

The chassis of TOS-1A MBRL system is based on the T-72 main battle tank. It retains the same design with the turret being replaced with the rocket launch facility.

The hull of the vehicle is made of reinforced steel. The total weight of the launch vehicle is 46,500kg.

The rocket launcher has the capability to carry three personnel, with the driver stationed in the middle and the commander and gunner accommodated within the two small turrets at the rear.

The MBRL system offers lower firing range compared to other multiple rocket launch systems. It, however, offers much versatility to the operators due to its thermobaric and multiple launch capabilities.

The TOS-1A platform carries an ammunition load of 24 rockets, while the TZM-T re-loader vehicle holds 48 rockets.

The launch system of TOS-1A integrates 24 launch tubes. The 220mm calibre tubes used in the system are longer and lighter than that of the earlier version.

The launch system is positioned exactly at the centre of the armoured chassis. It has the ability to rotate 360° without interruption in firing.

The fully automatic launch control system enables the launch of unguided missiles. Each rocket is equipped with a detonating fuse, special thermobaric explosives and a solid-fuelled thrust engine. The system has the capability to launch multiple rockets within half a second. The rockets can engage targets within the range between 400m and 6,000m.

Additionally, either side of the armored vehicle has Type 902G smoke grenade launchers.

The vehicle is powered by a V-84-1 engine with a rated power output of 840hp at 2,000rpm. The components of the TOS-1A rocket launcher system are similar to those of BM-1 Combat vehicle, while the chassis is based on the T-72 battle tank.

It has six road wheels on either side.

The vehicle has a maximum speed of 60km/h and can travel up to 550km.

Armenia, on the other hand purchased 6 TOS-1A back in 2016, and it is unclear if it operates more.