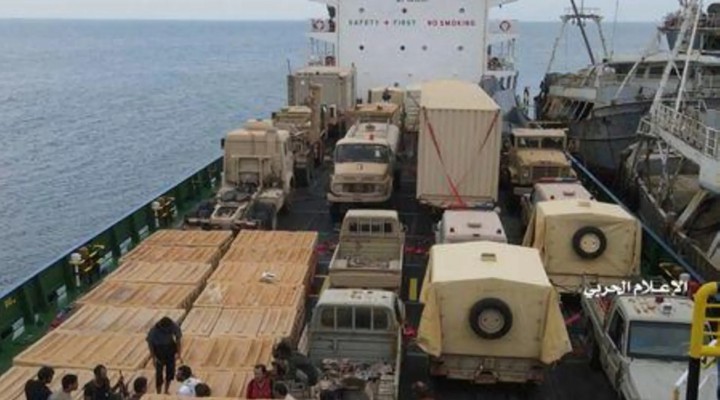 Is the undeclared truce over between Yemen’s Houthis and the UAE?

Monday’s seizure of a UAE-flagged ship by Houthi Ansarullah special forces in the Red Sea is a significant military development and suggests that the seven-year-old war Yemen War is set to escalate on all fronts in 2022.

According to Brig-Gen Turki al-Maliki, spokesman for the Saudi-led coalition, the ship was carrying supplies to Jazan in southern Saudi Arabia from the UAE-controlled Yemeni island of Socotra to Jazan after setting up a field hospital there. But this was refuted by his Yemeni opposite number Brig-Gen Yahya Saree, who released photos and footage of the impounded vessel in the port of Hodeida showing armoured vehicles and military equipment on board. This a major embarrassment for the coalition, proving that it has been violating the UN ban on arming the warring parties in Yemen.

The move coincided with an announcement by Saudi Arabia that its air defences intercepted Houthi drones targeting the military base at Ta’if in the southwest, and another by Ansarullah that its forces had retaken parts of Shabwa province to the south of Ma’rib which they lost in recent fighting.

Saree maintained that the detained Emirati ship is a naval vessel that was taking arms from Abu Dhabi via Socotra to UAE-backed factions on the western Yemeni coast. If true, this may mark the beginning of the undeclared understanding between Sanaa and Abu Dhabi that for the past seven years has spared the UAE from Houthi missile attacks.

The Houthis’ acquisition of the military capacity to impound vessels in the Red Sea is a significant development. It means their special units equipped with speedboats and monitoring and surveillance equipment are capable of exerting control over maritime traffic in the Red Sea and the Bab al-Mandab strait.

The seizure of the Emirati vessel was likely linked to the fighting in Ma’rib and the neighbouring governorate of Shabwa. In the latest turn of events there, advancing UAE-backed forces ousted provincial governor Mohammed bin-Adyu and replaced him with an Emirati client, dealing a powerful blow to the Muslim Brotherhood-affiliated al-Islah party and disrupting the balance of power in the area.

This escalation in the southern Red Sea will be of particular concern to the Israeli occupation state, as some 80% of its maritime trade transits the area. Given its covert involvement in the conflict (it has reportedly set up a joint intelligence base with the UAE on Socotra), its commercial and perhaps naval vessels could become vulnerable to Ansarullah’s missiles and boats. This time the target was an Emirati ship. Next time it might be an Israeli one.
It is worth noting that it was Houthi, not Iranian, drones that targeted an Israeli-owned tanker in the Sea of Oman in July, killing a crew member and a British security guard. This was according to the UK government, which vowed to retaliate and sent a contingent of special forces to Yemen’s Mahra province adjoining Oman to pursue the perpetrators and help protect US and Israeli shipping.

The new year looks likely to be replete with surprises in the Yemen war and on related fronts in the region.

0 thoughts on “Escalation in the Red Sea”