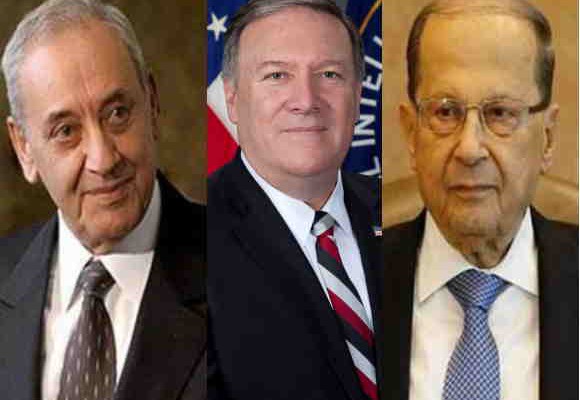 After the Beirut Port explosion destroyed half the Lebanese capital, killed and injured thousands of people and made 300,000 homeless; and after a contrived banking crisis caused the collapse of the Lebanon’s currency and drove more than 60% of the population below the poverty line; Parliament Speaker Nabih Berri announced on Thursday that, as a result of US mediation, a ‘framework agreement’ had been reached with Israel to demarcate the maritime boundary.

Direct talks on delineation are to be conducted by Lebanese army chiefs and officers under the supervision of President Michel Aoun and then prime minister. They are expected to begin next week at the UN headquarters in Naqoura near Lebanon’s border with occupied Palestine.

US Secretary of State Mike Pompeo, who first unveiled the agreement, described it as “the result of nearly three years of intense diplomatic engagement”, with Berri and his aides leading the Lebanese side.

Two things stand out about the announcement of this surprise agreement.

First, that Hezbollah has at this writing said nothing about the matter. It was not mentioned by Secretary-General Hassan Nasrallah in the speech he made on Tuesday night.

Secondly, it comes at a time when the US is exerting enormous pressure on Arab states to normalise relations with Israel – resulting in the ‘peace treaties’ signed with the UAE and Bahrain –in a way that could boost President Donald Trump’s re-election prospects.

Pompeo, who engineered this deal along with his aides David Sutterfield and David Shencker, described it as a “historic achievement”. American, Israeli and Lebanese commentators close to the administration hailed it and the negotiations that will follow for enabling Israel to feel safer and reducing the threat to its gas platforms in the Mediterranean, and also allowing Lebanon to eventually earn gas revenues to begin paying off its $100 billion debt

There was evidently more than meets the eye to French President Emmanuel Macron’s repeat visits to Lebanon supposedly aimed at speeding up the formation of a new Lebanese government. This issue seems to have been used as cover to put pressure on Lebanon’s political blocs and president to accept the US arrangements before next month’s elections, and that the Americans and French were working hand-in-hand in this regard.

The trips made to Lebanon by Shencker were not, as many were led to believe, aimed at challenging Macron’s moves but at supporting and enabling them. The sanctions the US imposed on two former Lebanese ministers, one of them a key aide of Berri, may have been designed to turn up the pressure and divert attention from this secret deal-making.

Many observers, ourselves included, did not believe Pompeo and Trump when they said five more Arab states were set to normalise relations with Israel after the signing of the Emirati and Bahraini agreements. It certainly did not occur to us that Lebanon would, in one way or another, become the next normaliser.

It is inconceivable that all these secret US-mediated talks could have taken place over the course of three years without the knowledge of Hezbollah, especially as Berri, the chief Lebanese interlocutor, is the party’s strategic ally. It would be wise to wait to hear what the Hezbollah leadership has to say about this issue to clarify its position and dispel suspicions.

0 thoughts on “Dragging Lebanon toward normalisation”