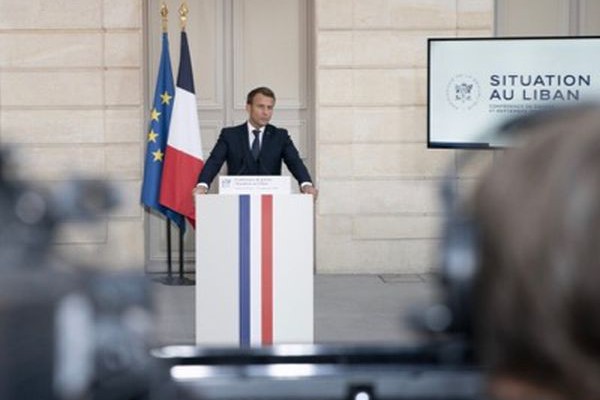 Playing Deus ex machina, President Macron came to distribute the good and bad points to the Lebanese leaders. Sure of his superiority, he said he was ashamed of the behavior of this political class. But all this is just a bad play. Underhandedly, he is trying to destroy the Resistance and to transform the country into a tax haven.

Reacting to the explosion of the port of Beirut on August 4, 2020, the Lebanese people and the international press saw it as an accident due to the corruption of the port authorities. For our part, after analyzing the first clues, we immediately questioned the thesis of the accident and favored that of the attack. French President Emmanuel Macron was urgently on his way to Lebanon to save the country. Two days later, we broadcast on a Syrian television station, Sama, the hypothesis of the continuation of the operation to implement Resolution 1559.

The hypothesis of resolution 1559

What is it all about? The 2004 Franco-US resolution was drafted on the instructions of US President George W. Bush, based on a text written by then Lebanese Prime Minister Rafik Hariri with the help of French President Jacques Chirac. It aimed to have the objectives formulated by US Secretary of State Colin Powell recognized by the United Nations Security Council:

to drive out the Syrian peace force resulting from the Taif Agreemen [1] ;

to put an end to the Lebanese Resistance to imperialism;

However, on February 14, 2005, Rafik Hariri, who was no longer Prime Minister and had just been reconciled with Hezbollah, was assassinated in a mega-attack in which Lebanese President Emile Lahoud and his Syrian counterpart, Bashar el-Assad, were accused of being the instigators. The Syrian peace force withdrew and President Lahoud renounced his candidacy.

In retrospect, it appears

that the attack was not carried out with conventional explosives carried in a white van, as is still believed, but with a weapon combining nanotechnology and enriched nuclear fuel that very few powers had at their disposal at the time [2] ;

that the international investigation carried out by the United Nations was in reality a secret CIA-Mossad operation directed against Presidents Lahoud and Assad as well as against Hezbollah. It was shattered during a huge scandal that brought to light false witnesses recruited and paid by UN investigators [3];

that all charges against the suspects were dropped and that a UN body, abusively labeled the “Special Tribunal for Lebanon” without having the legal attributes, refused to examine evidence and sentenced two Hezbollah members in absentia.

In the end, no one dared to mention again the end of the Lebanese Resistance as stipulated by Resolution 1559.

This Resistance was formed around Shiite families during the Israeli invasion (Operation “Peace in Galilee”) in 1982. After the victory, this network gradually entered politics under the name of Hezbollah. At the time of its creation, it was fascinated by the Iranian anti-imperialist revolution and backed by the Syrian army, as revealed by its secretary general in 2011, Sayyed Hassan Nasrallah. However, after the withdrawal of the Syrian peace force from Lebanon, it turned almost entirely to Iran. It returned to Syria when it realized that a defeat of Damascus at the hands of the Muslim Brotherhood would not only destroy Syria, but also Lebanon. During all these years, it acquired both a gigantic arsenal and combat experience, so that today it is the formost non-state army in the world. Its successes and the means at its disposal have attracted many people who do not necessarily share its ideals. Its partial transformation into a political party has made it acquire the same flaws as other Lebanese political parties, including corruption.

Today, Hezbollah is not a state within the Lebanese state, but in many situations it is the state instead of chaos. Faced with this hybrid phenomenon, Westerners have reacted in scattered order: the United States has classified it as “terrorist”, while the Europeans have subtly distinguished, in 2013, its civilian side with whom they discuss its military side, which they also condemn as “terrorist”. To justify their decision to their public opinions, the West has developed a number of secret operations aimed at attributing to Hezbollah either attacks prior to its existence (against the military contingents of the US and France at the regional meeting of the allied secret services), or attacks abroad (notably in Argentina and Bulgaria).

Completing the implementation of Resolution 1559 [4] today means disarming Hezbollah and transforming it into a simple political party, as corrupt by Westerners as the others.

President Emmanuel Macron was the first head of state to travel to Lebanon after the explosion in the port of Beirut, where he visited twice. He pledged not to let the country down and to help it reform. He presented a “road map” that was agreed upon by all political parties. It provided for the formation of a mission government to carry out economic and financial reforms. However, Mustapha Adib, the Prime Minister-designate, found it impossible to achieve this and resigned. President Macron then called a press conference on September 27. He booed the entire political class and explicitly accused Hezbollah and the Amal movement and implicitly their ally, President Michel Aoun, of having thwarted his attempt to rescue Lebanon.

President Macron’s arguments convinced only those who do not know the history of Lebanon. On the contrary, our readers know [5] that this country has never been a nation and therefore could never be a democracy. It has been shared by various confessional communities since the Ottoman colonization that coexist there without mixing with each other. This division was institutionalized by the Constitution (1926) inspired by France, a proxy power. Then, its functioning at all levels of the state was set in stone by the United States and Saudi Arabia, during the Taif Agreement (1989) which put an end to the civil war. From this point of view, it is strange, to say the least, to blame political personnel for corrupting the state when it is a direct and inexorable consequence of the institutions imposed on them from abroad.

Above all, it is inadmissible to hear a foreign president posing as a lecturer and declaring that he is ashamed of the Lebanese leaders. Especially since this foreigner represents a nation that has a heavy historical responsibility in the current situation.

It seems that in practice, Lebanon’s sponsors intend to overthrow the corrupt political class they have set up and replace it with a government of technocrats trained in their best schools. This government will be in charge of reforming the finances, restoring the tax haven of Lebanon’s golden age, but above all not to break the confessional system so that the country’s dependence on its sponsors will continue. This country would thus be doomed to remain colonized without admitting it and to behead some of its leaders every thirty or forty years.

In the minds of President Macron’s backers, the unrest in Saudi Arabia has thwarted the plan for a free zone for billionaires, Neom. Lebanon should therefore be used again to escape its own tax obligations.

Let us recall, moreover, that when France established secular institutions, it immediately deprived all its colonies of them, considering that religion was the only way to pacify the peoples it controlled. Lebanon is the only country in the world where a Shiite mullah, a Sunni mufti and a Christian patriarch can impose their views on political parties.

President Macron’s repeated attacks against Hezbollah are precisely in line with my hypothesis: the ultimate goal of the West is to destroy the Resistance and transform Hezbollah into a party as corrupt as the others.

Indeed, according to Emmanuel Macron, the current Hezbollah is at the same time a “militia”, a “terrorist organization” and a political party. Yet, as we have seen, it is in reality both the first non-governmental army dedicated to the struggle against imperialism and a political party representing the Shiite community. It has never been responsible for terrorist actions abroad. According to Macron, it has created “a climate of terror”, inhibiting other political formations. However, Hezbollah has never used its gigantic arsenal against its Lebanese rivals. The brief war of 2008 did not pit it against the Sunnis and Druze, but against those who housed spy centers of foreign powers (notably in the archive premises of FuturTV).

During the press conference, reference was also made to the demand of Hezbollah and Amal to choose the Minister of Finance. This apparently preposterous request is vital for the Resistance. Not to plunder the state, as some imply, but to circumvent US sanctions against the Resistance. Saad Hariri, after opposing it, rallied to it as soon as he grasped what was at stake. This is why, contrary to what President Macron claimed, the failure of the government formation is not attributable to Hezbollah or any other Lebanese formation, but to the French will to break the Resistance.

At the time of the election of President Jacques Chirac, the Saudi proxy, Rafik Hariri, heavily financed his election campaign, causing a memorable incident in the French Constitutional Council. Similarly, during the election of President Emmanuel Macron, Saad Hariri (son of the former president) financed his campaign, albeit on a smaller scale. So when Mr. Macron announced that the international community would save Lebanon financially if it applied its roadmap, Saad Hariri demanded a return on investment, namely 20% of the future sums. After consultation with his main donor, the US-Israeli Henri Kravis, [6] Emmanuel Macron refused and threatened sanctions against the three presidents of Lebanon (of the Republic, the Assembly and the Government).

France calculates on the basis of its historical knowledge of the region. However, it has not understood some of its evolutions, as its failures in Libya, Syria, and in the Iran-US negotiations attest. While it is concerned about Turkey’s influence in Lebanon, it overestimates that of Saudi Arabia and Iran, underestimates that of Syria and ignores that of Russia.

For those who observe precisely what is happening, France is not honest in its concern for Lebanon. Thus, President Macron’s trips had been preceded by the circulation of a petition calling on France to restore its mandate over Lebanon, that is to say, to recolonize it. It was quickly established that this spontaneous petition was an initiative of the French secret service. Or that the French president’s second trip was the centennial of the proclamation of Greater Lebanon by General Henri Gouraud, leader of the French Colonial Party. It is not very difficult to understand what France hopes to get in return for its action against the Resistance.